Why is Liz Cheney’s Jan. 6 Select Committee Functioning as Part of the Cover-Up? Part 2 – Free Birds 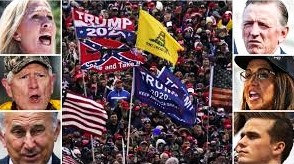 The  most readily diagnosed symptom of a dysfunctional congressional investigation is a narrow scope of inquiry: “The House Select Committee’s report on the Jan. 6, 2021, attack asks readers to suspend their belief in reality. Fault is found only with former President Donald Trump’s actions — no blame is given to the inactions of federal security officials. ...”  (Politico, January 6, 2023.)

Complicit Free Birds 1: The refusal of Pentagon officials to respond to the chaos at the Capitol has been obscured by lies: “A former D.C. National Guard official is accusing two senior Army leaders of lying to Congress. … In a 36-page memo, Col. Earl Matthews, who held high-level National Security Council and Pentagon roles during the Trump administration, slams the Pentagon’s inspector general for what he calls an error-riddled report that protects a top Army official who argued against sending the National Guard to the Capitol on Jan. 6, delaying the insurrection response for hours.” Matthews’ memo “calls two Army generals — Gen. Charles Flynn, who served as deputy chief of staff for operations on Jan. 6, and Lt. Gen. Walter Piatt, the director of Army staff — “absolute and unmitigated liars” for their characterization of the events of that day.”

“In March 2021, MG Walker was told by a friend that LTG Piatt was so upset with MG Walker that he directed the development of an Army ‘White Paper’ to retell events of 6 January in a light more favorable to LTGs Flynn, Piatt, Secretary McCarthy and the Army Staff,” Matthews writes. The Army Staff ultimately sought “to create an alternate history which would be the Army’s official recollection of events,” Matthews continues, adding: “The end product, a revisionist tract worthy of the best Stalinist or North Korea propagandist, was close hold,” kept secret from the public.” IPolitico, December 6, 2021)

Key witness not called to testify: Earl Matthews. (Donald Trump was also not summoned, though he should have been the first in line, until late October, 2022, when the committee knew it was too late to realistically expect him to appear.) Matthews would have testified that the National Guard was rendered a potted plant by the Pentagon as violence escalated on Capitol Hill. An excerpt from the Matthews memo: 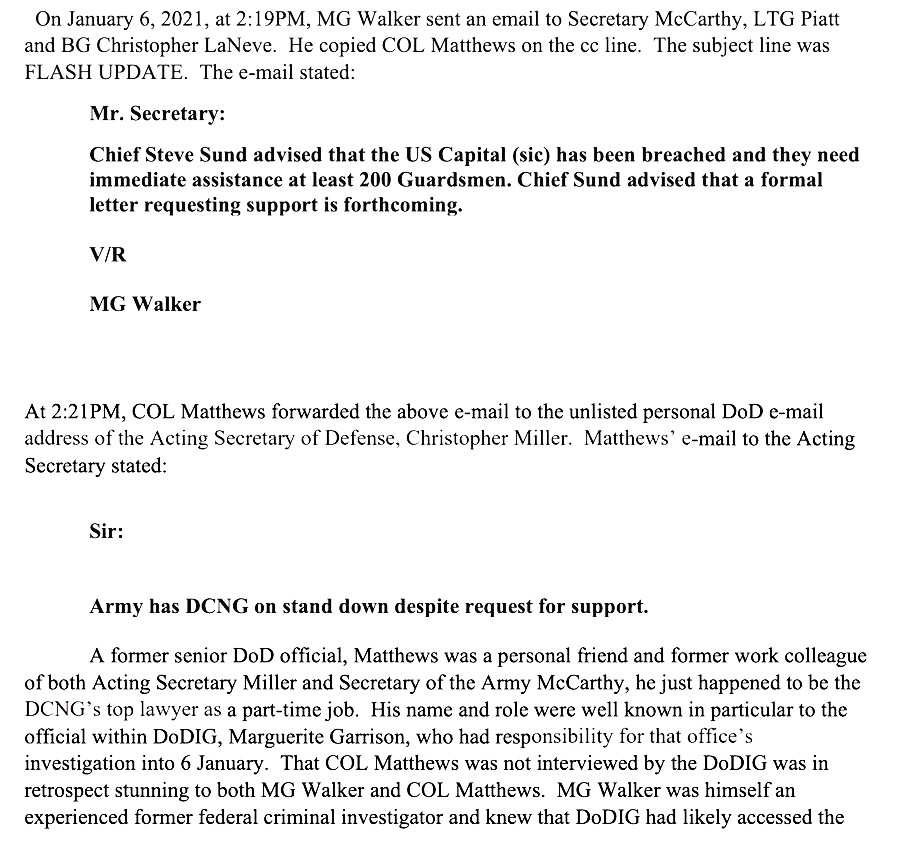 TThe Jan. 6 panel’s evasive conclusion: “The committee found that there was no deliberate attempt to stall the troops: ‘While the delay seems unnecessary and unacceptable, it was the byproduct of military processes, institutional caution, and a revised deployment approval process,’ the committee writes in Appendix 2. ‘"We have no evidence that the delay was intentional.’” (NBC News, December 22, 2022.)

Destruction of Evidence by the Pentagon, Secret Service and Others: "Last month, the public learned that the Secret Service had deleted, or negligently allowed the deletion of, texts surrounding the January 6, 2021, insurrection at the U.S. Capitol. Last week, The Washington Post reported that texts for top officials then in the Department of Homeland Security, including Acting Secretary Chad Wolf and his deputy, Ken Cuccinelli, are also missing. And yesterday, CNN reported that, according to court filings, the Pentagon wiped the phones of top defense officials, including messages from that day. (An official told The Washington Post the deletions were standard process.) ...

"Some of the officials whose texts were deleted, like Secret Service agents, were civil servants, but others were political appointees, although they also held positions that were not meant to be involved in electoral politics and they had taken an oath to defend the Constitution. ... The deletions correspond to Trump’s attempt to enlist essential government departments, such as the Pentagon and the Secret Service, into his political schemes. " (The Atlantic, August 3, 2022.)

Complicit Free Birds 2: The Secret Service ignored orders to preserve the e-mails, but deleted them anyways to avoid prosecution: "Agents were supposedly given instructions on three separate occasions to preserve these messages ahead of a looming change in technology — once before Jan. 6, and finally in February 2021 when congressional investigators were specifically seeking that day’s texts — and yet most were still deleted, for good.Whatever Secret Service bigwigs claim happened here, the reality is that justice has already been obstructed. Those who are found responsible should face the threat of criminal penalties as severe as those for the crimes — all the way up to seditious conspiracy — that might have been shown by the missing texts." (San Jose Mercury News, July 26, 2022.)

Complicit Free Birds 3: Why haven't Trump's congressional co-conspirators been referred to the DOJ?: There were 147 Republicans in the House who made a bit to decertify the election (even after the riot subsided), participated in the fraudulent electors phase of the coup plot, facilitated the breach of the Capitol, or all of the above. They refused to appear before the committee. Refusal to testify does not constitute a free pass to sidestep prosecution. 18 USC 2383: Rebellion or insurrection: "Whoever incites, sets on foot, assists, or engages in any rebellion or insurrection against the authority of the United States or the laws thereof, or gives aid or comfort thereto, shall be fined under this title or imprisoned not more than ten years, or both; and shall be incapable of holding any office under the United States."

Trump's mob of swastika-tattooed street gangs, QANON fanatics and sundry far-right supporters weren't sent to subvert the Constitutional system with crowbars and bear spray. They were Trump's Big Stick, insurance for the 147 seditionists in the House of Representatives, who, once Trump swaggered the front door -- Mussolini complete with high-decibel mob of Black Shirted hit men -- would see the plot through to its chaotic conclusion (he was diverted by the Secret Service and didn't make it, but that was in his playbook of dreams). They were the most critical conspirators of the insurrection, with Mike Pence at the core. Yet the FBI beats the bushes for bombastic wingnut lowlifes, but hasn't made a move to charge the 147 who attempted to subvert the will of the voters in a presidential campaign. The Jan. 6 Select Committee insurrectionist ignored the the Constitution, and has suggested asking the Ethics Committee to sanction them. The law does not threaten seditionists with sanctions. It codified a stuff prison sentence, fines, and forbids them from holding federal positions.

It was a very selective Select Committee, indeed, with Trump and a few associates alone referred to the DoJ for criminal prosecution. It remains to be seen if even Godfather Trump will be held accountable. His aviary sings: "Please don't take it so badly/'Cause Lord knows I'm to blame/'Cause I'm as free as a bird now/And this bird you cannot change/Fly on free bird!"

Also See - "Why is Liz Cheney's Select Committee Functioning as Part of the Cover-Up, Part 1"

Related - "The Siege of the Capitol: All Roads Lead to Robert Mercer"