Why Can’t People Forgive Fred Malek for a Little Dog-Roasting? 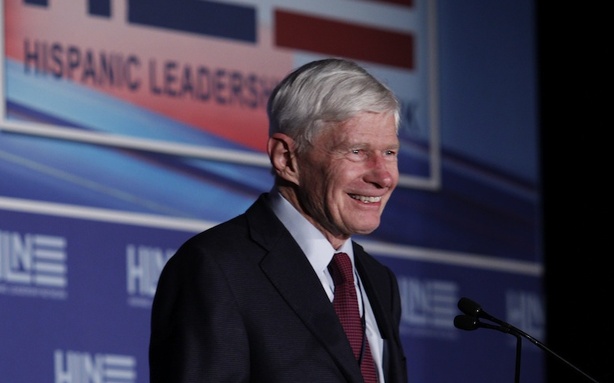 ” … now that he’s fundraising for Mitt Romney, all anyone cares about is his dog barbecue … “

It’s not that there are no second acts in American political life, it’s more like the second and third acts are littered with what comedians refer to as “callbacks,” allusions to jokes from Act One.

Every year or so, poor old Fred Malek, the GOP fundraiser, has to suffer through a callback to his youthful indiscretions, like that one crazy time in his twenties that he and his friends were caught drunkenly barbecuing a dog on a spit, or the wacky moment in his thirties when he counted the Jews in the Bureau of Labor Statistics so President Nixon could demote them, or the hilarious time in his sixties when the Securities and Exchange Commissioned ordered him to personally pay a $100,000 fine for allegedly using taxpayer funds to reward a political supporter. *(Youth!)

On Friday, the anti-Mitt Romney group Dogs Against Romney noted that Malek is hosting Ann Romney’s birthday party. Dogs Against Romney does not appear to be an entirely serious group, as its core issue is reminding the world of the time in 1983 when Romney went on a road trip with his dog strapped to the car’s roof. Nevertheless, poor old Malek must relive those old memories again.

These are the things Malek is infamous for:

In 1959, Malek and four other men in their 20s were arrested at 2a.m. in a Peoria park when police found them covered in blood. Police found a skinned animal on a spit. Malek said he had nothing to do with the dog killing.

In 1971, the Bureau of Labor Statistics issued a report playing down a drop in the unemployment rate, and President Nixon became obsessed with the idea that Democratic Jews were conspiring against him in the agency. “We’ve got to get a man in charge who is not Jewish to control the Jewish … do you understand?” Nixon told chief of staff H.R. Halderman. Halderman appointed Malek to the case. In 1988, The Washington Post reported notes from five White House meetings taken Halderman. They include:

Malek identified 13 Jews, and many were singled out for demotion. And now he never hears the end of it!

The Jew-counting was first revealed in 1988 by The Washington Post when Malek was to become deputy chairman of the Republican National Committee. He had to resign. In 2004, the stories made news again when Malek was fined by the SEC for his his company’s work on Connecticut’s pension fund. The SEC said Malek’s firm paid Malek’s old political pal a lot of money to do zero work.

The Jew-counting came up again in 2007, when he was named national co-chair of John McCain’s presidential campaign. In 2010, Virginia Gov. Bob McDonnell — a potential Romney running mate! — named Malek to head his Commission on Government Reform and Restructuring. The Jew-counting came up again — the story more richly textured thanks to the release of more Nixon documents — and Malek had to apologize one more time. McDonnell claimed he had no idea of Malek’s old job. Nixon White House alum Ben Stein was moved to write an essay titled “Leave Fred Malek Alone” in the American Spectator. Stein wrote, “Richard Nixon, in a silly moment, asked if the economists in the BLS who were giving out the data were his political enemies and if they were Jews… Nixon never intended to do a thing about it, never intended to punish anyone, was just curious about why the BLS seemed to be slanting the news the way he thought it was being slanted.” (Historical evidence does not appear to support this description of events.) When Malek was advising Sarah Palin, the Jew-counting came up again.

And now that he’s fundraising for Mitt Romney, all anyone cares about is his dog barbecue. Though Malek didn’t officially endorse Romney till January, he’s been a fan for a while. Malek maxed out in personal donations to Romney earlier this year. He’s repeatedly praised Romney to reporters, and his support for Romney goes way back (Romney appeared at a fundraiser at Malek’s house back in May 2009.) When Tim Pawlenty quit the race and backed Romney, Romney urged supporters to help Pawlenty retire his campaign debt, and Malek’s group pitched in with a $45,000 purchase of Pawlenty’s donor list. And all that time, no one talked about the Nixon stuff.

It must be a relief Friday to talk about an entirely different embarrassment for once. The doggie BBQ story has the added effect of being mutually beneficial: Dogs Against Romney has struggled to get publicity, its actions mostly limited to some protests and selling snarky stickers. Finally, people are talking about them, too. This old dog has some life in ‘im yet.