Elections: "Semi"-Fascist Americans Poised to Pack Freedom & Democracy Off to Siberia on a Hopper Car (Impakter) - The Constantine Report
0 SHARES

Historically the President’s party tends to lose control of Congress and the Senate: the pressure on ordinary citizens is rising 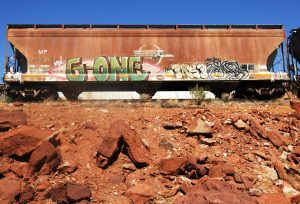 ... The latest New York Times/Siena College national survey shows that 49 percent of voters say they back the Republican congressional candidate in their district, compared with 45 percent backing the Democratic one.

In our upcoming November 8 election, all (two-year term) 435 seats in the House of Representatives and 35 out of the 100 Senatorial positions are up for grabs. With a present Democratic majority of only 5 representatives and a tied Senate (the Democratic Vice President casts the deciding vote), it is very possible that one or both houses may go Republican.

This year, a very powerful cabal of MAGA (from former President Trump’s slogan “Make America Great Again”) Republicans are determined to undermine the voting process itself.

The New York Times reports that ‘More than 370 people — a vast majority of Republicans running for these offices in November — have questioned and, at times, outright denied the results of the 2020 election despite overwhelming evidence to the contrary.”  Not only are there far too many Trump-backed House and Senate candidates who accept the “big lie” that he won the 2020 election, there are also many “down ballot” races of Republicans for governors and secretaries of state (who are in charge of elections) resolved to follow the MAGA mantra that “If I win, I win; if I lose, the election was rigged.”

All over the country, Republican “Activists driven by false theories about election fraud are working to toss out tens of thousands of voter registrations and ballots in battleground states.”  In an article headlined “Right ties up voting process with red tape”, the New York Times identifies these activities as “part of a loosely coordinated campaign that is sowing distrust and threatening further turmoil as election officials prepare for the November midterms.”

With these bleak prospects for those of us who cherish the democratic process hanging over our heads, we are deeply anxious about some of the probable outcomes.

The Supreme Court has overturned women’s reproductive rights in America, throwing the decision back to the states.  Already, 16 states have banned abortion altogether, many excluding exceptions even for rape and incest.

In Michigan, where I live, we have a “trigger law” which, with the overturning of Roe v. Wade, would have automatically subjected us to the draconian reproductive rules of 1931. Our Democratic governor (who is up for election against an anti-abortion candidate) and her Attorney General have held the 1931 law back while citizens gathered thousands more signatures than we needed for a ballot initiative to enshrine abortion rights in the Michigan constitution.

This too is up for grabs in our midterm elections.

Although the turnout of people shocked at being stripped of a constitutional right that has been in effect for 50 years is likely to be high, Republicans are systematically undermining the voting process.

As the House Select Committee investigating the January 6 attack has revealed, Republican attempts to intimidate election officials along with ordinary citizens who volunteer to count the vote have been constant and terrifying.

“With just five weeks left until Election day on November 8,” writes Michael Wines, “a drumbeat of lawsuits, harassment, calls to change balloting procedures and demands for reams of election records …are adding to pressures on election officials just as work in advance of the vote is peaking.”

As the above video shows, the pressure is high on everyone, I’m sharing here excerpts from my diary, recording our rocky path to the midterms.

September 29:    There is good news and bad news. The bad news is what Republicans are trying to do (fix future elections in their favor) which fills me with dread.   The good news is that a whole lot of people – from local Big Lie agitators to Trump’s own lawyers are suffering the consequences:

An election worker in the Grand Rapids area was charged with two crimes after a witness reported seeing him place a USB flash drive into an electronic poll book at the close of the Aug. 2 primary. In nearby Genesee County Michigan, an election clerk is on trial for breaking the seal on a ballot box in our primary. A group called Lawyers Defending American Democracy is asking that Trump lawyers have their licenses to practice revoked for masterminding Electoral Fraud. As they have already succeeded in disqualifying Rudy Giuliani, they will probably succeed!

September 30:  Let’s hear it for the Rule of Law: Won’t prosecuting and indicting people for promulgating “The Big Lie” deter more such efforts?

Take the months-long investigation that intrepid Georgia district attorney, Fani T. Willis has conducted into Trump’s (taped, telephone) demand that Georgia come up with 12,000 votes to throw him the 2020 election. Too, Ms. Willis is investigating his lawyer Boris Epshteyn, who helped to assemble “a bogus slate of electors in an effort to thwart the outcome of the popular vote in Georgia.”

October 5  I wrestle my yard signs onto the front lawn. 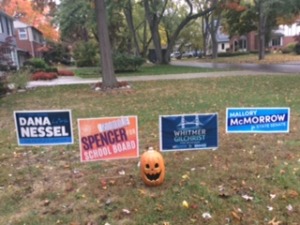 There are four of them this year, all local:

For Governor Whitmer and her Lieutenant Governor Garlin Gilchrist, who are trying to protect our reproductive freedom and our voting rights;

For Nicole Spencer, a school board candidate who will fight against racist book banning; and

For State Senator Mallory McMorrow – remember her? She is the young state legislator who defended herself against Republican accusations of being a pederastic Democratic predator in a courageous speech in the Michigan Senate.

Their list is derived from two sets of data:  one of the people from both parties who have identified climate issues as an important concern; the other telling us which of these people are registered but unlikely to vote.

I was horrified to find among my instructions a reminder that the back envelope of the mail-in ballot must have two signatures – one yours, and one of another adult. Nobody I called knew this! Is it a Republican ploy to invalidate mail-in ballots, with the idea that Democrats are more likely to vote this way?

October 7:  EVP notifies me that:

“161,393 Virginia voters have already cast ballots (2.7% of registered voters). 9,724 of those ballots (6.0%) have been cast by EVP-targeted environmental voters who are voting in their very first midterm election.”

Dobbs is the name of the case where the Supreme Court threw out our abortion rights; the Dobbs Effect is the expected massive turnout of pro-abortion voters. Dire projections could be true: Senatorial races in Georgia, Pennsylvania, Ohio, Texas, Wisconsin, and Arizona are neck-and-neck.

October 13:  In my neighborhood email newsletter, people are puzzled about the wording on the Ballot Initiative to codify abortion rights in our State Constitution.

My reply: “Plain and Simple: Republican women also have ectopic pregnancies and hemorrhage after miscarriages: a YES vote brings health care for these instances as well as an abortion if you want one; a NO vote results in compromised or no health care for these issues and all abortions prohibited even after rape or incest.”

October 15:   I join “Text Banking” with Interfaith Power and Light in Pennsylvania.  These are voters of faith who don’t vote often or at all, but who are alarmed by climate change. The campaign is non-partisan, simply urging this population to vote for their values.

“Text Banking” means that you send messages from your computer, wait for replies, then respond over a 24-hour period.   It is all set up for you on your computer, with helpful follow-up replies for the most frequently asked questions.

Though a lot of people ask you to cross them off the list, and even more damn all Democrats to hell, the result was that our group of about 30 texters sent 22,000 texts to voters in Pennsylvania.

Just the opposite, our contacts vote rarely, if at all.  Will we succeed in motivating enough of our unlikely voters to swing things our way?

Meanwhile, Trump and his candidates are all over the TV news tonight fomenting antisemitism with enraptured crowds cheering them on.

But victory is not a given. With antisemitic Fascists trying to turn America authoritarian, getting out the vote is proven crucial:

Now Is the Time for All Good Folk to Come to the Aid of Democracy!