Why is Liz Cheney’s Select Committee Functioning as Part of the Cover-Up? 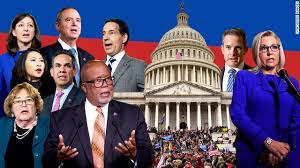 Thus far. a fawning press has expressed no skepticism over the work of the Jan. 6 Select Committee.  The committee's staff, however, is capable of actual critical thinking.

They stood in the wings and watched the committee waste precious time on Donald Trump's TV viewing in the White House cafeteria as his storm troops sacked the Capitol. For two months, the panel concentrated on the ride from the rally at the Obelisk to the White House, as if this is somehow pertinent. So far, the pundits at MSNBC and CNN have gone along with Cheney's misdirection. Trump's TV viewing and a lunge for the steering wheel may be of passing interest, but none of this is actually relevant to an attempt to subvert a presidential election.

There were 140 participants in the failed putsch sitting in the House of representatives. Under current Constitutional law, anyone who aids and abets insurrectionists is exempt from holding public office. Yet there they are, defying a legal injunction, still aiding and abetting an ongoing insurrection. Some of them talk openly of executing Democratic leaders, and they frequently whistle at rabid hounds to commit acts of political violence (terrorism).

The committee's staff is not mentally stunned by Cheney's bluster and pencil biting. On November 23, the Washington Post reported that staffers are "angered and disillusioned by Cheney’s push to focus the report primarily on former president Donald Trump, and have bristled at the committee morphing into what they have come to view as the vehicle for the outgoing Wyoming lawmaker’s political future."

Even the narrow concentration on Trump has not been investigated thoroughly: They are chagrined that "important findings unrelated to Trump will not become available to the American public."

Yet staffers "were floored earlier this month when they were told that a draft report would focus almost entirely on Trump and the work of the committee’s Gold Team, excluding reams of other investigative work. Potentially left on the cutting room floor, or relegated to an appendix, were many revelations from the Blue Team — the group that dug into the law enforcement and intelligence community’s failure to assess the looming threat and prepare for the well-forecast attack on the Capitol."

Cheney promised early on that the panel would follow the money trail, but "the proposed report would also cut back on much of the work of the Green Team, which looked at financing for the Jan. 6 attack, and the Purple Team, which examined militia groups and extremism."

All 15 disgruntled staffers noted: “We all came from prestigious jobs, dropping what we were doing because we were told this would be an important fact-finding investigation that would inform the public. But when [the committee] became a Cheney 2024 campaign, many of us became discouraged.”

Cheney spokesman Jeremy Adler countered with a thunderous non-reply: “Donald Trump is the first president in American history to attempt to overturn an election and prevent the peaceful transfer of power. So, damn right Liz is ‘prioritizing’ understanding what he did and how he did it and ensuring it never happens again.”

Republicans often bristle theatrically when cornered, and this can be taken as confirmation of guilt. The thespian chest-thumping is often followed by slander: “Some staff have submitted subpar material for the report that reflects long-held liberal biases about federal law enforcement, Republicans, and sociological issues outside the scope of the Select Committee’s work. She won’t sign onto any ‘narrative’ that suggests Republicans are inherently racist or smears men and women in law enforcement, or suggests every American who believes God has blessed America is a white supremacist.”

The staffers did not call Cheney a seditious bigot, or even bad-mouth law enforcement officers. They said that Cheney is using the panel as a springboard for her political ambitions.

By coming forward, the staffers had somehow "forgotten their duties as public servants."  Cow-towing to Liz Cheney's evasive tactics and false promises is a "duty?"

Republican slander is always over the top: "their cowardice is helping Donald Trump and others responsible for the violence of January 6th."

The Post: "some staffers noted that the mission of the committee — as spelled out in the resolution authorizing its formation — was to discover what political forces and intelligence and security failures allowed the U.S. Capitol Police and its partners to be so overwhelmed and ill-prepared for the attack and to ensure that such an event could not happen again. Leaving any relevant information out of the final report would ignore important lessons for the future and issues that will outlive Trump, they argued."

An NBC News earlier last month noted that the committee's report would exclude much of the panel’s work not related to Donald Trump. So, as the Post reported, "lawmakers on the committee are now reassessing what to include in the final draft and also eyeing different ways to publicly share more of the investigators’ work outside of the report."

Granted, Trump was the crux of the coup plots, and the sidelining of the intelligence community, for example, is also highly pertinent.

"A senior committee staffer told staff in a virtual conference meeting two weeks ago that none of the work done by people serving on teams other than the Gold Team that didn’t focus on Trump would be included in the final report."

“Everybody freaked out,” the staffer said.

The press and the public should also freak out. Major Trump donors are now financing Cheney's presidential bid. This is a massive conflict of interest. Clearly, she is just another GOP actor engaged in stagecraft.
The panel's staff knows this is so. But they are not alone: "Tensions among lawmakers on the committee are also high, with some members angry about information being shared with the press regarding internal discussions on what to include or exclude from the final report."

So are Democrats on the committee also treasonous, agnostic "cowards" who have claimed that Cheney is a "white supremacist?" None of this is relevant to the criticism leveled at her. She is obstructing justice, aiding and abetting an insurrection, and has no valid claim to further public representation.