Seeing Nazi imagery on the Internet is always a bad sign — doubly so when it's part of a campaign photo in support of a presidential candidate.

On the morning of July 14, a photo including the American flag, the hashtag #MakeAmericaGreatAgain, and four men wearing Nazi uniforms was posted to Donald Trump's Twitter account and Facebook page.

They may be hard to spot at first glance, but the soldiers marching towards Trump's face in the photo are in fact wearing the uniform of the Waffen-SS, part of the armed wing of the Nazi party.

Michael Niemberg was the first to spot the men in the image, followed by blogger John Schindler.

Schindler tweeted that he's "100% certain" these are Nazi uniforms because of the style of camouflage and the SS eagle.

Schindler, along with many other Twitter users, then proceeded to mock Trump's use of Nazi imagery to "#MakeAmericaGreatAgain."

Another Twitter user found the origin of the soldiers' picture: A stock photo titled "Marching soldiers" on iStock, which shows models walking through a field. 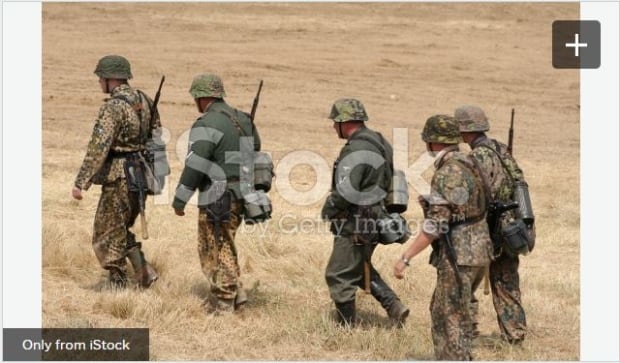 This image was used in the Donald Trump campaign ad as a stand in for generic soldiers. (George Cairns/iStockPhoto)

​"I have photos of American soldiers as well," Cairns said to Mother Jones. "But for some reason, politicians seem to be downloading Nazis." 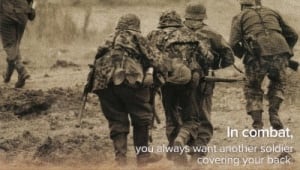 Trump's campaign is blaming the use of this image on an intern.

"A young intern created and posted the image and did not see the very faded figures within the flag of the stock photo. The intern apologized and immediately deleted the tweet," a spokesperson relayed to the Daily Dot.

The controversial posts have since been deleted from Twitter and Facebook, though the morbidly curious can still see the image on both accounts using archive.org.

Despite recent controversy, including labeling illegal immigrants from Mexico as rapists, a USA Today poll lists Trump as leading the Republican presidential race.