REWARDING THE SEDITION CAUCUS: WHY BIG OIL IS SO HAPPY TO GIVE GOP INSURRECTIONISTS CAMPAIGN FUNDING 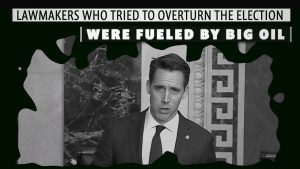 Since the January 6 insurrection, six of the biggest fossil fuel companies in America have given nearly $700,000 to the campaign and leadership PACs of the Sedition Caucus, according to CREW’s ongoing tracking.

They have also given more than $350,000 to the NRSC and NRCC which work to reelect congressional Republicans, a majority of whom voted against certifying the 2020 election, for a total of over $1 million to be potentially spent on keeping the Sedition Caucus in Congress.

Valero Energy and Marathon Petroleum top the list at $400,000 and $264,500, respectively. Both companies pledged to stop donating indefinitely, but resumed giving less than six months later. ExxonMobil ($126,000) and Chevron ($113,000) resumed giving to the Sedition Caucus within five months of the insurrection, despite pledging to review their contributions.

Occidental Petroleum ($103,000), after a five-month pause to ensure future contributions “align with [their] values,” resumed donating to the seditionists. ConocoPhillips ($39,500), which resumed giving in September 2021, technically kept its promise to pause for “at least six months,” but the entire commitment was ultimately meaningless as none of the 147 Republicans who voted against the election had recanted or faced discipline for their votes at that point. As members of Congress fundraise on two- and six-year election cycles with strict giving limits, these pauses did effectively nothing other than change the date on the checks the corporations were already going to write.

Unsurprisingly, the donations targeted lawmakers with direct influence over the companies’ business interests, including many Big Lie supporters. No member of the Sedition Caucus received more from these companies than House GOP leader Kevin McCarthy, who pulled in $75,000 from the six companies.

After the insurrection, McCarthy briefly cast blame on Trump for inciting the attack before abruptly changing course to stand by the former president. Since then, McCarthy has continued to amplify lies about the election and even threatened companies who comply with the January 6 committee’s investigations, warning that “a Republican majority will not forget.”

The second-ranking House Republican, Steve Scalise, received $52,500 from the six companies. After the insurrection, Scalise reportedly said it was time to move towards a “post-Trump Republican House,” but ultimately fell back in line. He voted against the January 6 committee because it would not investigate other acts of “political violence,” including the summer 2020 racial justice protests, which Scalise said must be “prosecuted with the same aggressive zeal” as the attempted coup. Scalise sits on the Energy and Commerce Committee.

ExxonMobil, Chevron, Marathon and Valero gave $18,500 to Representative Bill Johnson, who tweeted days after the election that “[e]veryone knows that dead people did vote in the 2020 election.” Claims that a significant number of votes were cast by dead people have been debunked and specific instances cited by Trump and his allies have been shown to be in his favor. The same companies gave another $16,000 to Representative Richard Hudson, who said the January 6 committee will give Republicans “a strong appetite for revenge.” Representative Jeff Duncan, who accused “political operatives” of manipulating the 2020 election, received $7,500 from ExxonMobil, Chevron and Marathon. All three sit on the House Energy and Commerce Committee.

The recipients also include lawmakers tasked with keeping these companies in line. In October 2021, the House Oversight and Reform Committee held a hearing on Big Oil’s role in spreading climate disinformation. The CEOs of ExxonMobil and Chevron testified in front of a panel of lawmakers that included six beneficiaries of their corporate PACs. Representative Virginia Foxx, Scott Franklin, Byron Donalds, Pat Fallon, Yvette Herrell and Bob Gibbs have all received donations from one or both companies.

Koch Industries, the top donor to the Sedition Caucus, is another major oil producer. Koch has not shied away from funding controversial members, despite promising to consider the “civility” of those they support after the insurrection. Representative  Scott Perry, who refused to meet with the January 6 commission and said he had “continue to fight the failures of the radical Left who desperately seek distraction from their abject failures,” received $7,500. Perry was working directly with the White House on a plan to overturn the election.

He also sits on a Transportation and Infrastructure subcommittee that oversees pipeline construction, and a Koch subsidiary happens to own four thousand miles of oil and natural gas pipelines. Representative Pete Sessions, who reportedly planned to attend the rally preceding the Capitol attack and encouraged rally organizers to “keep fighting” during a meeting days before the event, received $5,000. Sessions sits on the House Oversight and Reform Committee.

Fossil fuel companies’ priorities are wrong. Like so many other industries, they have been unwilling to back up their rhetoric and cut off support to members of Congress who fanned the flames of insurrection. Political influence should not come before preserving democracy. Businesses must hold themselves to a higher standard than that.