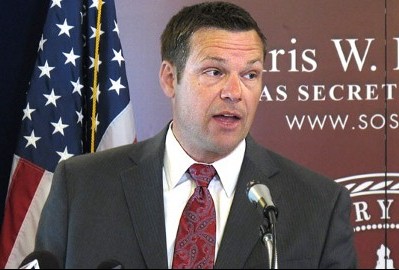 “… In March, he said during a radio interview that President Obama could absolve black people of all crimes and last year, he blamed ‘affirmative action culture’ on Obama’s success. …”

A bill that could head to the Kansas governor’s desk this week would give Secretary of State Kris Kobach (R) the authority to prosecute cases of voter fraud. If signed, the legislation would grant him even more power to make voting a political issue and to intimidate and suppress voters from participating in elections.

The state House on Wednesday narrowly gave initial approval to the legislation, which would allow Kobach and future secretaries of state to bypass the attorney general to prosecute election crimes, a responsibility not typically given to the person delegated with running elections. The bill would also upgrade a number of election crimes to felonies from misdemeanors.

Kobach, who has notoriously attempted to purge the state’s voter rolls and pushed for the enactment of a voter ID law, told the Topeka Captial-Journalthat “the vote on the bill comes not a moment too soon.”

Kobach claims he has identified 100 cases of potential voting in the 2014 election — a tiny percentage of the total number of votes cast. But even if he were to bring cases against the people who allegedly voted twice, similar investigations by other state attorneys general have found that most instances of alleged voter fraud are the result of voter confusion or mistakes made by election officials and not deliberate attempts to commit fraud. When federal investigators looked into Kobach’s claims of voter fraud in the past, they determined the cases were not actually fraud.

Earlier this year, a report found that Kobach’s list of 25,000 Kansans with suspended voter registration contains more voters who meet the voting requirements than not. The study by True the Vote, a Tea Party group, found that 59 percent of those suspended voters have no factors preventing their eligibility.

He has also worked tirelessly to get other states to join his error-riddled Interstate Voter Crosscheck Program, a system which purports to flag voters who are registered in multiple states, but has often incorrectly flagged legitimate voters.

Kobach also enacted a law in 2013 requiring people to provide proof of citizenship when registering to vote. In the first few months, roughly 12,000 Kansas voter registration forms were not approved because the individuals had not yet proven their citizenship. And after a year, Kobach admitted that more than one-third of the 20,000 voters whose registrations were suspended were actually eligible voters.

The law was part of a larger effort by Kobach — who also spearheaded many draconian anti-immigrant laws including Arizona’s SB 1070 — to target Latinos and prevent them from voting. A court eventually ruled that the state cannot force voter registration applicants to show proof of citizenship.

The state Senate has already approved the legislation that would grant Kobach prosecutorial power. If the Kansas House approves it in a final vote scheduled for Thursday, it would head to Gov. Sam Brownback’s (R) desk.

Currently, county attorneys and the state attorney general have the authority to go after election crimes. Expanding that power to Kobach would mean three separate entities could prosecute voter fraud.

“It creates a scenario where you could have a race to the courthouse. And whoever files first gets to prosecute,” state Rep. Russell Jennings (R), who opposed giving Kobach prosecutorial power, told the Topeka Capital-Journal. “And there’s one of the three in this conversation that really wants to get to prosecute, and I really want him to file papers and keep good records, not prosecute.”

Kobach has also made inflammatory comments related to other citizens he thinks are cheating to get ahead. In March, he said during a radio interview that President Obama could absolve black people of all crimes and last year, he blamed “affirmative action culture” on Obama’s success.