Scalia and the Chamber of Commerce – An Ugly Combination

"People don't understand what Scalia is all about. Look at his history -- his father ran the American fascist party in New York ..."

The U.S. Supreme Court's recent decision in Citizens United v. FEC opened the flood gates for corporate dollars to influence elections. That means the U.S. Chamber of Commerce and its president, Thomas Donahue, must be salivating at the thought of manipulating our democracy even more than they already do.

Donahue & Co. are certain to be major players in the 2010 state and federal elections, reports Rebecca Abrahams at Huffington Post. She points to Mississippi as a cautionary tale that illustrates how the chamber stacks the legislative and judicial decks in favor of corporations--at huge cost to consumers.

For good measure, Abrahams reports, the chamber can rely on U.S. Supreme Court Justice Antonin Scalia to bail it out of tight spots.

Scalia pulled a game-changing stunt in Mississippi's 2000 election, helping to turn the state's high court over to pro-business interests. In late October that year, roughly a couple of weeks before the November election, the U.S. Chamber poured huge sums of money into Mississippi, in apparent violation of state election laws.

One of the chamber's targets was Oliver Diaz, who later became embroiled in the Paul Minor prosecution. Reports Abrahams:

Diaz says in late October 2000, the U.S. Chamber of Commerce began running vicious television ads against him saying he favored "drug dealers and baby killers" and that he should not be elected to the position. Diaz recalls his team had to scramble to combat the campaign.

"Right at the end of the election after we'd already budgeted for our ad campaign, the U.S. Chamber came in with well over a million dollars in the final weeks of the campaign. It was the first time they came into Mississippi so we didn't know it was going to happen. Nobody had ever seen this type of operation."

Five pro-consumer judicial candidates filed an injunction to keep television stations from the running the chamber's ads. A local judge granted the injunction, but the chamber sought emergency relief from the U.S. Supreme Court. The issue landed on Scalia's desk, and he allowed the ads to move forward. 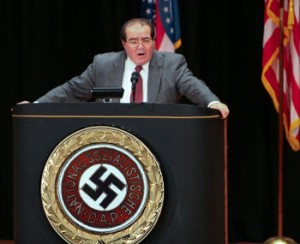 What does Scalia mean to the U.S. Chamber? Abrahams provides insight, with the help of Florida-based trial attorney Mike Papantonio:

"Scalia is the primary henchman. When you're out of plays and you've exhausted all of the efforts you go to a guy like Scalia. People don't understand what Scalia is all about. Look at his history--his father ran the American fascist party in New York. Not only that he attended the same schools those people attended. He is their man whenever they're in trouble. For example, you always see Scalia, the guy for emergency relief. I've got a verdict in West Virginia that Bobby (Kennedy Jr) and I tried, (an environmental class action case) against Dupont that received a $400 million jury verdict. If the State Supreme court doesn't take it away from Dupont, Dupont will try to get in some form a federal judge or emergency writ to a guy like Scalia. He is their last vestige of protection and he makes no bones about what his politics are and that's what you saw with the Diaz case in Mississippi."

Diaz managed to win the election, with the financial support of Paul Minor and others. But the U.S. Chamber's next tactic was to target Minor and Diaz with a bogus prosecution, in an effort to dry up a key source of funding for Democratic candidates. What does the Minor case say about the state of our union? Abrahams addresses that question:

Attorney Mike Papantonio says these cases are a grim example of a broken judicial system and the U.S. Chamber's control over it:

"People miss the idea that all the Chamber wants is a Supreme Court not really - the Chamber starts from the ground up to replace trial judges with political hacks.

If you were to take all the issues that the Chamber holds near and dear to them, this is the most important -- to close the courthouse door. They tried with Diaz. Diaz was one of many targets all over the country for god sakes. His case exemplifies their methodology. Even the effort to convict him wasn't as bad as was the process to convict.

Diaz didn't favor anybody but he at least gave the average person a chance at trial. He wasn't bought and paid for by the Chamber and the Chamber hated him for that.

He was willing to hold corporate America accountable when other Mississippi judges would not. He understood there was some semblance of justice that should be there when a corporation makes a product that kills people even though they make more money. That's not the case with most judges in the Deep South. They've been commandeered by the Chamber."

The Citizens United ruling could be viewed as a warning shot, Abrahams reports. Papantonio says President Barack Obama needs to follow Franklin Roosevelt's example in 1937 and declare war on the U.S. Supreme Court:

Papantonio warns if the GOP run Chamber is able to control the courts, Americans will have little recourse against corporations that commit tortuous acts. He says if victims could hold corporate wrongdoers accountable, litigation would be unnecessary.

"Any time you have industrialists that have an agenda - there's a strategy to completely scrap the judicial process that allows average people to fight back. I would love to say to corporate America and the Chamber, we don't need judges like Diaz if you'd at least be the middle of road. We don't need that if we can throw people in jail. But we're all keeping our eye on who's being elected to Congress while these s.o.b's have been working day and night on who's going to be trial judges, appellate judges and appointed to Supreme Court. But people don't understand the judiciary. It's no big deal until it's your child or your son who's horribly injured or you file a claim for discrimination. We don't care about the U.S. Chamber. The community is decimated with environmental problems and people just aren't connected on this kind of level. We still have the ability to turn this around but Obama needs to wake up."