THIS month, the headlines were about a Muslim man in Boston who was accused of threatening police officers with a knife. Last month, two Muslims attacked an anti-Islamic conference in Garland, Tex. The month before, a Muslim man was charged with plotting to drive a truck bomb onto a military installation in Kansas. If you keep up with the news, you know that a small but steady stream of American Muslims, radicalized by overseas extremists, are engaging in violence here in the United States.

But headlines can mislead. The main terrorist threat in the United States is not from violent Muslim extremists, but from right-wing extremists. Just ask the police.

In a survey we conducted with the Police Executive Research Forum last year of 382 law enforcement agencies, 74 percent reported anti-government extremism as one of the top three terrorist threats in their jurisdiction; 39 percent listed extremism connected with Al Qaeda or like-minded terrorist organizations. And only 3 percent identified the threat from Muslim extremists as severe, compared with 7 percent for anti-government and other forms of extremism.

The self-proclaimed Islamic State’s efforts to radicalize American Muslims, which began just after the survey ended, may have increased threat perceptions somewhat, but not by much, as we found in follow-up interviews over the past year with counterterrorism specialists at 19 law enforcement agencies. These officers, selected from urban and rural areas around the country, said that radicalization from the Middle East was a concern, but not as dangerous as radicalization among right-wing extremists.

An officer from a large metropolitan area said that “militias, neo-Nazis and sovereign citizens” are the biggest threat we face in regard to extremism. One officer explained that he ranked the right-wing threat higher because “it is an emerging threat that we don’t have as good of a grip on, even with our intelligence unit, as we do with the Al Shabab/Al Qaeda issue, which we have been dealing with for some time.” An officer on the West Coast explained that the “sovereign citizen” anti-government threat has “really taken off,” whereas terrorism by American Muslim is something “we just haven’t experienced yet.” 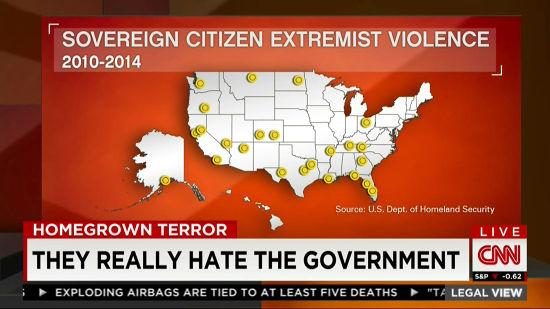 Last year, for example, a man who identified with the sovereign citizen movement — which claims not to recognize the authority of federal or local government — attacked a courthouse in Forsyth County, Ga., firing an assault rifle at police officers and trying to cover his approach with tear gas and smoke grenades. The suspect was killed by the police, who returned fire. In Nevada, anti-government militants reportedly walked up to and shot two police officers at a restaurant, then placed a “Don’t tread on me” flag on their bodies. An anti-government extremist in Pennsylvania was arrested on suspicion of shooting two state troopers, killing one of them, before leading authorities on a 48-day manhunt. A right-wing militant in Texas declared a “revolution” and was arrested on suspicion of attempting to rob an armored car in order to buy weapons and explosives and attack law enforcement. These individuals on the fringes of right-wing politics increasingly worry law enforcement officials.

Law enforcement agencies around the country are training their officers to recognize signs of anti-government extremism and to exercise caution during routine traffic stops, criminal investigations and other interactions with potential extremists. “The threat is real,” says the handout from one training program sponsored by the Department of Justice. Since 2000, the handout notes, 25 law enforcement officers have been killed by right-wing extremists, who share a “fear that government will confiscate firearms” and a “belief in the approaching collapse of government and the economy.”

Despite public anxiety about extremists inspired by Al Qaeda and the Islamic State, the number of violent plots by such individuals has remained very low. Since 9/11, an average of nine American Muslims per year have been involved in an average of six terrorism-related plots against targets in the United States. Most were disrupted, but the 20 plots that were carried out accounted for 50 fatalities over the past 13 and a half years.

Can we agree to agree?Both right-wing zealots and Islamist zealots pose serious threats to us all, and therefore deserve all the scrutiny we...

In contrast, right-wing extremists averaged 337 attacks per year in the decade after 9/11, causing a total of 254 fatalities, according to a study by Arie Perliger, a professor at the United States Military Academy’s Combating Terrorism Center. The toll has increased since the study was released in 2012.

Other data sets, using different definitions of political violence, tell comparable stories. The Global Terrorism Database maintained by the Start Center at the University of Maryland includes 65 attacks in the United States associated with right-wing ideologies and 24 by Muslim extremists since 9/11. The International Security Program at the New America Foundation identifies 39 fatalities from “non-jihadist” homegrown extremists and 26 fatalities from “jihadist” extremists.

Meanwhile, terrorism of all forms has accounted for a tiny proportion of violence in America. There have been more than 215,000 murders in the United States since 9/11. For every person killed by Muslim extremists, there have been 4,300 homicides from other threats.

Public debates on terrorism focus intensely on Muslims. But this focus does not square with the low number of plots in the United States by Muslims, and it does a disservice to a minority group that suffers from increasingly hostile public opinion. As state and local police agencies remind us, right-wing, anti-government extremism is the leading source of ideological violence in America.

An Op-Ed article on Tuesday omitted the given name of a scholar of counterterrorism at West Point. He is Arie Perliger.