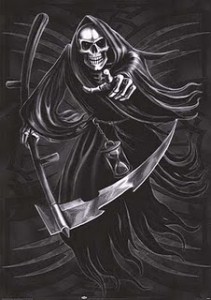 1. Dan Rocco -- April 1, 2002 -- ChoicePoint VP -- plane crash -- He died on April 1, 2002, in a plane crash in Gainesville, Georgia. He was an executive vice president at ChoicePoint, the firm that gained infamy with their faulty "felons" list supplied to Katherine Harris during the 2000 election in Florida. As a result of this list, over 90,000 voters (mostly African-American voters) were wrongly identified as felons and purged from the rolls.

(Jackson-AP) -- The pilot of a single-engine airplane that crashed in southern Ohio over the weekend was the chief operating officer of Canton-based Diebold Incorporated.

The company says 45-year-old Wesley Vance of Canton was flying a private plane that crashed Saturday near the Jackson County Airport. ...The company says Vance joined Diebold in October, 2000, as president of its North America business unit. He was named chief operating officer in 2001. Chief Executive Walden O'Dell will assume the company's daily operational responsibilities until a successor is found for Vance. An airport spokesman says Vance was practicing takeoffs and landings in a six-seat Beachcraft A-36 when it crashed near the airport.

[Note - On September 21, 2005, Diebold announces that its current COO will leave his post and the board. Stock drops 16% intraday. O'Dell will temporarily assume the post.]

Vance was an Eagle Scout, elected to Boys State, and a church-going Mormon, married, father of five. He earned a degree from Brigham Young University. He was described as a confident person who people liked to be around. His senior class in high school voted him "favorite boy". He had been a pilot for over twenty years. He was named to Diebold's No. 2 position as COO in 2001, managing the company's global operations.

Celebrezze, a Democrat of Columbus, was a stalwart in Cleveland and Ohio politics.... He was 38 when he was elected secretary of state in 1978.

Wayne Hill, Celebrezze's longtime communications director during the 1978 campaign for secretary of state and then attorney general, was in shock at Celebrezze's death yesterday.

Hill said Celebrezze, who enjoyed racing cars, was at Shady Bowl Speedway in De Graff for a Fourth of July race when he felt ill. De Graff is west of Columbus.

"It's beyond a shock. Tony had a passion for racing," said Hill in a telephone interview. "It's unbelievable. It's not right."

... After his loss to Voinovich, Celebrezze joined the law firm of Kegler, Brown, Hill & Ritter, and recently was a consultant for Diebold Inc., promoting electronic voting machines. 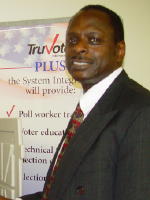 Was planning to present his new voting machine, and its paper verification features, to the Georgia legislature within a week of the crash.

Andy had worked for Black Box Voting and barnstormed around the country investigating and speaking. It was Andy who uncovered (among other things) much of the story of Jeffrey Dean, the VP at Diebold who did software programming, who was a convicted felon whose crime had been embezzlement using computers. Andy went to many of the nation's election hotspots, including Florida and Ohio.

In January 2005, Andy noticed he didn't feel well. In April, he was diagnosed with pancreatic cancer. He was eventually treated at Johns Hopkins, after the national election community raised $50,000 in eleven days for his treatment. He died of post-surgery complications and a series of strokes. He was 43. His surgery had been postponed for two weeks due to the efforts of people who tried to monkeywrench Paypal and Johns Hopkins, and who spread nasty rumors that Andy wasn't really sick, and that this was all a scam. Someone managed to shut down his Medicaid after the surgery, once again slowing things down. One of his supporters in Baltimore had her car vandalized.

He had said a year earlier: "I've been threatened by these people [makers of voting machines]. I've been followed from my home to work. The president of Diebold told me to back off or I would get a visit. My phone's been tapped. I've been ridiculed. I've been called a conspiracy theorist. You bet I'm going to demonize them. It's wrong. We're privatizing our elections. It's something that should remain in the hands of the people...We need to take it back. It's We the People." "If they take our right to vote away, we're nothing but slaves. I'm sorry. I'm not willing to be a slave. I'm not willing to go quietly into the night." --Andy Stephenson, July 13, 2004 in an interview following a press conference next to the Austin State Capitol Rotunda.

Columbus, Ohio resident Bill Moss was highly visible in the efforts to rectify the many wrongs of the November 2004 election in Ohio. Elected five times to the Columbus Board of Education, Rev. Moss was an eloquent speaker. He was considered a possible national spokesperson for the election reform movement, in an informal meeting held in Houston on June 30, 2005 after the Election Assessment Hearing. Like Athan Gibbs, Moss was African-American. 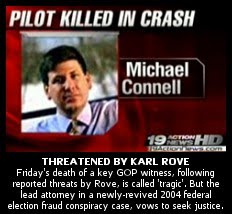 Connell was "a key witness in the King-Lincoln v. Blackwell lawsuit regarding fraud in the 2004 election in Ohio. That ongoing lawsuit led to Connell's deposition on November 3, 2008, the day before the general election. According to plaintiff's lead attorney Cliff Arnebeck, Connell was also threatened by Karl Rove in attempt to intimidate him into 'taking the fall' for Ohio election fraud."

Local firefighters and law enforcement personnel look over the wreckage of a small plane that crashed near a home at 2017 Charolais St. on Friday, Dec. 19, 2008, in Lake Township, Ohio. (Ed Suba Jr./Akron Beacon Journal)

Pokey Anderson has broadcast or published numerous reports on voting machine issues over the past four years. She co-produces a weekly news and analysis radio program, The Monitor on KPFT-Pacifica in Houston.