Review: The Devil’s Deal – The IRA and Nazi Germany by David O’Donoghue

Mad, bad and dangerous to know? Perhaps Jim O’Donovan was all three. Perhaps he is best understood as a disturbed product of his disturbed times, but there is no doubt he was disturbed.

O’Donovan led a life that was undercover and remarkable.

As a young chemistry student at UCD he became the IRA’s top explosives man during the War Of Independence.

During the Civil War he was jailed as an enemy of the State, bragging that he’d bettered Jesus Christ by hunger-striking for 41 days. He finally settled into a job with the ESB, but kept his cherished one with the IRA. In that capacity he became the terrorist group’s chief link to Hitler’s henchmen in Nazi Germany.

Stirred by the 1916 Rising, the 21-year-old chemistry student worked late in the UCD labs concocting, as he later recalled, “poison gas, tear gas and things like that. . . During one of these experiments (the mixture) blew up and I got the liquid gas on my face. I thought I was blinded but fortunately after 15 or 20 minutes I found I could open my eyes.”

According to David O’Donoghue’s new account of the life of the IRA’s chief weapons expert, entitled The Devil’s Deal, the staff and students of UCD were fully aware of his extra-curricular activities, but were happy to turn a blind eye. The Satanic pact of the title refers to his love affair with the Nazis and in particular his key role in the bombing campaign of Britain in 1939-1940. In advance of the war he made visits to Berlin and Hamburg to cosy up to the masters of the Third Reich. 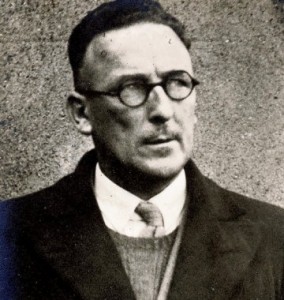 It’s thought that one of O’Donovan’s chief Nazi contacts in Ireland was Adolf Mahr, who was director of the National Museum in the 1930s. Mahr had a busy time in Dublin, recruiting 23 of his fellow Irish-based Germans to the party.

An intriguing photo from that decade of the Local Group Leader of Ireland’s Nazis shows him presiding at a football friendly between Bohemians FC and a German selection where the Irish crowd raised their arms in a Nazi salute.

With O’Donovan one of those at its helm, the IRA declared itself the rightful government of the Irish Republic. It issued Britain with an ultimatum in January 1939 demanding a complete withdrawal from the island of Ireland and from Irish affairs. Three days later, and nine months before World War Two ignited Europe, a proclamation was posted on Ireland’s walls declaring war on Britain.

A document known as the S-Plan or Sabotage Plan set out precise tactics aimed at paralysing Britain by destroying civic, military and industrial targets. Direct military action against troops and armament factories were only to be carried out if there was a chance they wouldn’t become suicide missions. Public utilities including railways, water supplies and gasworks were targeted. Businesses and industrial plants were on the hit list, as were the big newspapers, which were unfriendly to the recently independent Free State.

One day after the IRA’s declaration of war, five bombs probably engineered by O’Donovan exploded. Three targeted power stations, causing little damage, but the attack brought strife to the market towns of Coleshill and Alnwick. The following day there were more explosions.

Police were assigned to gas works, power stations and telephone exchanges, while security was stepped up at the BBC. All ships from Ireland were given a thorough search.

Fourteen Irishmen in Manchester and London were arrested. The Irish Government rushed through two Acts arming itself with draconian powers against the IRA. The IRA released a statement saying that it intended there would be no killing.

There was killing though, and Jim O’Donovan was at the heart of it. A bomb planted in the left-luggage area of King’s Cross Railway Station severely injured three people, one of them fatally. Five were badly wounded the same day in an explosion at Victoria Station.

The most notorious outrage of the campaign took place in Coventry, where a bomb went off in a crowded shopping district, killing five and wounding over 50. Two Irishmen found guilty of the Coventry bombing were speedily hanged. By February 1940 the number of Irish deported under new legislation was 119.

The “demolition” campaign dreamed up by Jim O’Donovan and others had fizzled out by the spring of 1940. By then a large number of IRA suspects were detained in Irish and British jails and internment camps, including O’Donovan himself. He spent two years in captivity before his release in 1943.

Remarkably he walked straight back into his job with the ESB, despite the fact that the gardai had proof of his IRA membership and his Nazi links.

It was a time in the early life of the country when you could (just about) get away with either.

If the first half of Jim O’Donovan’s life reads like a true-life adventure story, the second half was one of disappointment and dullness. He died of kidney failure in 1979, a retired civil servant, having long abandoned his involvement with the physical force movement.

He went to his grave frustrated that his struggle for a united Ireland had failed.