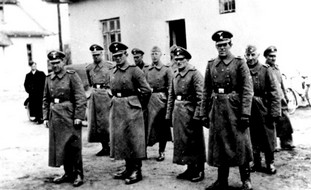 “… CIA spokesman George Little said yesterday: ‘The CIA at no time had a policy or a program to protect Nazi war criminals, or to help them escape justice for their actions during the war.’ …”

NEW YORK — Declassified CIA files reveal that US intelligence officials went to great lengths to protect a Ukrainian fascist leader and suspected Nazi collaborator from prosecution after World War II and set him up in a New York office to wage covert war against the Soviet Union, according to a new report to Congress.

Mykola Lebed led an underground movement to undermine the Kremlin and conduct guerrilla operations for the CIA during the Cold War, said the report, prepared by two scholars under the supervision of the National Archives. It was given to Congress on Thursday and posted online.

During World War II, the report says, Lebed helped lead a Ukrainian nationalist organization that collaborated with the Nazis in the destruction of the Jews of the western Ukraine and also killed thousands of Poles. The report details postwar efforts by US intelligence officials to throw the federal government’s Nazi hunters off his trail and to ignore or obscure his past.

“You can make the argument the CIA never should have gone near this guy because of his past,’’ said Norman J.W. Goda of the University of Florida, who wrote the report with Richard Breitman of American University in Washington. But Goda said the CIA found the relationship to be so valuable for getting information into and out of the Soviet Union that it “couldn’t be sacrificed.’’

“This was somebody that was very, very useful and remained so for the entire Cold War,’’ he added.

The report, titled “Hitler’s Shadow: Nazi War Criminals, US Intelligence, and the Cold War,’’ was written by historians hired by the US National Archives and Records Administration.

The report draws from an unprecedented trove of records on individuals and clandestine operations that the CIA was persuaded to declassify and from over 1 million digitized Army intelligence files that had long been inaccessible.

“The CIA records give us a much better picture of the movements of Nazi war criminals in the postwar period,’’ Breitman said. “The Army records are voluminous, and will be keeping people busy for many years.’’

CIA spokesman George Little said yesterday: “The CIA at no time had a policy or a program to protect Nazi war criminals, or to help them escape justice for their actions during the war. The agency has cooperated for decades with the Justice Department’s Office of Special Investigations.’’

The records were made available under the Nazi War Crimes Disclosure Act of 1998, one of the most ambitious and exhaustive federal government efforts to expose its own secrets.

The papers include correspondence, excerpts, clippings, medical records, and vouchers. They illuminate the activities and postwar whereabouts of some of the most high-profile alleged Nazi war criminals.

The Nazi War Crimes Disclosure Act has resulted in more than 8 million documents being declassified, a 2005 book on “U.S. Intelligence and the Nazis’’, and a final report to Congress. The interagency working group overseeing the project was disbanded in 2007.

Review: The Devil’s Deal – The IRA and Nazi Germany by David O’Donoghue
Dec 12