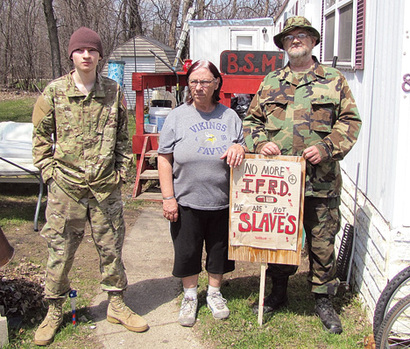 ” … Jeff and Shawn Rogers habitually wear military-style camouflage and display the American flag upside down as a distress signal. Jeff Rogers said. ‘I.F.R.D.’ refers to microchip tracking devices used for pets. “Someday everyone is going to have to wear them to buy food,” Jeff Rogers said. …  The family are ‘preppers’ and members of the militia movement, but don’t believe in violence except for self-defense. … “

Father of accused says son is no terrorist

MONTEVIDEO – The father of Buford Rodgers, the Montevideo man arrested by the FBI on Friday, said Monday his son is not a terrorist.

Jeff Rogers denies his son was in possession of firearms or explosives.

“All the guns are registered to me,” Jeff Rogers said. “He doesn’t live here and hasn’t for over year.”

Jeff Rogers said his son was on probation for a burglary conviction but had straightened his life out since.

“Bucky is not a terrorist,” Jeff Rogers said. “He is not out to bomb anyone. He’s a patriot like we all should be.”

The family denies there were any bombs on the premises.

“Bombs in the house, gimme a break!” said Jeff Rogers’ wife, Margaret. “If there were we’d have known about it and we’d have told him to take them apart. And his girlfriend wouldn’t have stood for it.”

The family claims the only materials found in a search of the shed and under the trailer were pipe scraps for plumbing and household chemicals.

Federal and local law enforcement arrested Buford “Bucky” Rogers on Friday, briefly detained a friend and family members, and searched a trailer home and storage shed for weapons and explosives.

Jeff Rogers said the family went to the courthouse Monday morning and were informed Buford Rogers had been transferred to federal custody in Minneapolis.

According to an arrest warrant issued by the U.S. District Court for Minnesota, a complaint was filed against Rogers for knowingly and unlawfully possessing a firearm and affecting interstate commerce after a felony conviction.

An affidavit filed by FBI agent Marc Rensch, assigned to the Minneapolis Division, states that a search of the premises found several items including a number of firearms including a Romanian-made AKM assault rifle, suspected pipe bombs and Molotov cocktails, an improvised incendiary bomb commonly made from a bottle filled with gasoline and a rag stuffed in the neck of the bottle for a fuse.

The affidavit states that Buford Rogers admitted under interrogation that he had fired a weapon at a gun range in Granite Falls on two occasions.

The family denies Buford Rogers has fired a weapon since being put on probation in 2011, but admit that he has helped clean them, thus accounting for fingerprints on the weapons registered to his father.

A news release from the Minneapolis Field Office of the FBI states, “The FBI believes that a terror attack was disrupted by law enforcement personnel and that the lives of several local residents were potentially saved.”

Neighbors at the Montevideo Manufactured Homes Community said the first thing they knew of anything out of the ordinary was when the raid began at around 11:30 am.

Next-door neighbor Pam Rathburn said she’s lived in the trailer park for 22 years, and the Rogers family about three years.

The Rogers’ residence has a sign outside saying, “No more I.F.R.D. We Are Not Slaves,” and another “BSM” meaning “Black Snake Militia” according to Jeff Rogers, the father of Buford Rogers.

“Someday everyone is going to have to wear them to buy food,” Jeff Rogers said.

According to Shawn Rogers, Buford’s brother, the family are “preppers” and members of the militia movement, but don’t believe in violence except for self-defense.

“If the police and government fail to do their jobs, we’re prepared to defend ourselves,” Shawn Rogers said.

Neighbors say they have never been a problem and mostly kept to themselves.

“I’ve said ‘Hi’ to them, I haven’t really talked to them,” said Silvana Florez who lives across the street. “They were pretty quiet.”

Florez’s boyfriend, Leslie Sack, said he saw law enforcement personnel laying a number of rifles and pistols on a table set up in front of the trailer and carry some small packages to a bomb disposal trailer, though he did not see the agents put the packages into the bomb containment chamber.

Sack said the agents took the packages and later heard two loud explosions, and one more after an interval. Sack said he presumes the packages were taken to the local shooting range, about a quarter mile from the trailer park.

According to Shawn Rogers, he was given a ride from school to the house his brother Buford Rogers shares with his fiancee and their four-month-old son, and was admitted by FBI agents.

The agents then arrested Buford Rogers when he came home from work shortly thereafter.