Was he acting in self-defence?

That was the initial plea made by Mr Davis and the US embassy. However, subsequent investigations by the police, forensic labs and the local and international media suggest that the two men were driving away from Mr Davis when they were shot. In February Lahore's police chief said that Mr Davis was guilty of "cold-blooded murder" - he said that no fingerprints had been uncovered on the triggers of the pistols found on the bodies of the two men. Furthermore he said that tests had shown that the bullets remained in the magazines of their guns, not the chambers, suggesting they weren't about to shoot him. On the face of it, this leaves Mr Davis's claim that they were robbers - with one even apparently cocking a gun at his head - looking very thin. In addition, police say ballistics evidence shows that the pair were shot in the back - which again suggests they were moving away from Mr Davis, rather than about to attack him.

What about the second car and its victim?

A side event to the main drama concerning Mr Davis was the fact a third man was also killed during the incident. He was an innocent bystander run over by a US embassy vehicle, which was initially said to have arrived to rescue Mr Davis. The fact that an embassy vehicle was able to get to the spot so quickly was a source of astonishment to anyone who is even vaguely aware of the geography of Lahore. Given the incident was over within minutes, it seems incredible that anyone could negotiate the 12km (7.4-mile) 40-minute drive in peak traffic in less than five minutes. But subsequent investigations have now shown that the second car - a Toyota Landcruiser - was with Mr Davis at the time of the incident. In fact, according to eyewitnesses, Mr Davis was leading and clearing the way for the Toyota when the incident took place. In the light of what happened afterwards, it seems Mr Davis was in "protective mode" and opened fire to "secure" whoever or whatever was in the Toyota - the interior of this vehicle was not visible as its windows were tinted. It is evident in local TV footage that the second vehicle is going away from Mr Davis at the time of the incident. As it disappears into the dust, Mr Davis calmly pulls over and gives himself up. Pakistani authorities have asked for the Landcruiser and its driver to be handed over - a request with which the US has yet to comply.

LAHORE/ISLAMABAD – While the Punjab government is demanding the US Consulate in Lahore surrender the driver and the car involved in the Raymond Davis-related hit-and-run incident that killed Ibadur Rehman, federal officials offer contradictory stands about the identity and whereabouts of the driver.

A consulate jeep setting out to rescue CIA agent Raymond Davis on January 27 crushed Ibad to death on the way, and the driver along with the vehicle have since been missing.

A highly-placed political source in the federal government, privy to all developments, said on Tuesday that that no one knows the identity of the driver and the passengers. However, another official, believed to be equally knowledgeable, said that Raymond Davis revealed the names of the so-called rescuers during the initial interrogations.

On the other hand, the US media claims the hit-and-run driver and passenger have reached America, compounding the mystery shrouding their identity and disappearance. ...

... Many Pakistanis are suspicious about Davis, who was arrested with loaded weapons, a GPS satellite tracking device, photographs of Pakistan’s defence installations and tribal areas, while American authorities are still silent about his role in Pakistan. ... 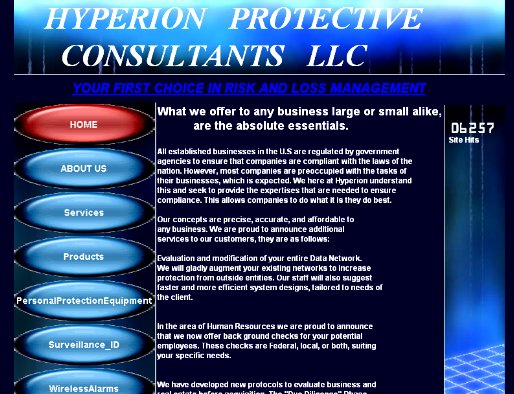 A man From Highlands Ranch [Colo.] accused of shooting two Pakistanis reportedly had been working as a CIA security contractor, and living in a safe house in Lahore. ...

Public records examined by KCNC News in Denver name Davis as an officer of Hyperion Protective Consultants, a Florida-based firm with an empty office and no one answering the phone. While the man listed as "Managing Director" remains the object of an angry international tug of war, Protesters have already been calling for his hanging. ...

... The case illustrates the degree to which even the CIA’s frontline work has been privatised.

When first arrested on January 27 for gunning down two men in Lahore, Davis described himself as a “contractor” and presented police with a business card identifying his company as Hyperion Protective Services, based in Orlando, Florida.

When the Bureau attempted to speak with the company’s co-founder, Mr Gerald Richardson, it was told Mr Richardson had simply provided building security for a previous business at that address, and that his whereabouts were no longer known.

A Hyperion Protective Services is also listed in Las Vegas, Nevada. Raymond A Davis and wife Deborah are listed as the owners, in a company offering ‘private investigations’ and an ‘armored car service’.

The given number transfers callers to a rural Arizona address.

Paperwork filed with Arizona State describes Hyperion’s work as ‘high risk threat protection’.  But the Davis family has moved on, this time to Highlands Ranch, near Denver, Colorado.  Calls by local media to the Davis house were initially forwarded to the CIA, inadvertently outing his main employer, according to The Guardian.

Despite being a frontline CIA agent, Davis remains a freelance contractor.  Leaked invoices obtained by Pakistan’s Dawn newspaper appear to show that Davis is paid $780 a day while stationed in Pakistan – and in total is paid $200,000 a year, presumably by the CIA.

It has also been reported that Davis once worked for Blackwater, now known as Xe, the mercenary organisation which is contracted by the CIA on various projects.

Both the US Department of Defense and the CIA have rapidly expanded their use of private contractors in the past decade. Recent estimates have placed the annual contractor bill at $45bn -  representing more than half of the entire intelligence budget. ...

Did Davis double-cross America as recruitment point man for Taliban?

American official Raymond Davis, arrested for double murder, had "close links" with Taliban and was "instrumental" in recruiting youths for it, the media here claimed on Tuesday, close on the heels of reports in the US that he was a CIA agent tracking movements of terror groups like LeT.

The "close ties" of 37-year-old Davis, arrested in Lahore on January 27 for killing two men he claimed were trying to rob him, with the Tehrik-e-Taliban Pakistan came out during investigations, 'The Express Tribune' reported quoting an unnamed senior official of Punjab Police. "Davis was instrumental in recruiting young people from Punjab for the Taliban to fuel the bloody insurgency (in Pakistan)," the official said.

The report came a day after The NYT, citing US government officials , said that Davis "was part of a covert, CIA-led team of operatives conducting surveillance on militant groups deep inside the country." ...