A report reveals fresh details on how US intelligence officers protected a number of Nazi war criminals after World War II. Facing the Cold War, the US became less interested in punishing Nazi criminals as early as 1946.

Newly declassified material from the CIA and the US military confirm that after World War II Allied intelligence officers protected former Nazis and war criminals if they proved useful and cooperative.

“Undoubtedly, the onset of the Cold War gave American intelligence organizations new functions, new priorities, and new foes. Settling scores with Germans or German collaborators seemed less pressing; in some cases, it even appeared counterproductive,” said the report, which was published Friday by the US National Archives.

“Despite variations, these specific cases do show a pattern: the issue of capturing and punishing war criminals became less important over time.”

The report, titled Hitler’s Shadow: Nazi War Criminals, US Intelligence and the Cold War,  draws on information classified until 2005 and made available under the Nazi War Crimes Disclosure Act, an effort by Washington to shed more a critical light on its own secrets.

The report looks into a number of former SS and Gestapo members who escaped justice with the US either knowingly tolerating their escape or even helping them to flee.

Rudolf Mildner, for instance, was initially arrested in an operation searching for Nazis might lead an underground Nazi resistance.

US authorities knew Mildner had long been a Gestapo member but never pressed him for details on the Gestapo’s crimes against Jews or any other groups. Held and questioned in Vienna, US officials found him to be “very reliable and cooperative.”

A closer look into his past, however, revealed that he had ordered the execution of between 500 and 600 Poles at the Auschwitz death camp. Confronted with the accusations, Mildner confessed and is quoted in the report as having tried to rationalize his actions claiming that “to preserve order and prevent sabotage, the Germans in Poland and Silesia had to do that too.”

Later, countries including Britain and Poland requested Mildner’s extradition. But according to the report, “tracking and punishing war criminals were not high among the Army’s priorities in late 1946.”

US authorities are believed to have protected him from extradition and even facilitated his escape later to South America, which became a haven for many former Nazi war criminals fleeing from justice.

Husseini received substantial financial and logistical support from Nazi Germany with an eye on using him to control Palestine once Germany would have defeated Britain in the Middle East. Husseini and Berlin where united mostly by regarding Jews as their common enemy.

The newly declassified CIA and Army files establish that the Allies knew enough about Husseini’s wartime activities to consider him a war criminal. Fearing prosecution, he fled to Switzerland, where the country’s authorities handed him over the French.

The British government was against Husseini being put on trial as it feared political unrest in Palestine. He went on to live in Syria and Lebanon and always rejected allegations of having had ties with Nazi Germany. He claimed he visited Berlin only to avoid arrest by the British.

Earlier this year, Germany declassified material from former East German Stasi files that detailed how the West German intelligence service drew on having former Nazis and war criminals in its rank and file. The new post-war West German secret service was set up with the help of the Allies. 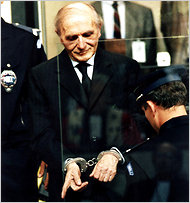 As the Soviet bloc was the West’s common enemy after 1945, several historians have said Allied authorities widely accepted that former Nazis could escape justice if their skills proved useful on the new fronts of the Cold War.