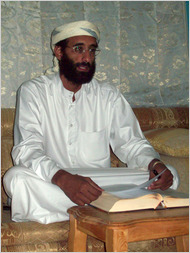 WASHINGTON — The Obama administration’s decision to authorize the killing by the Central Intelligence Agency of a terrorism suspect who is an American citizen has set off a debate over the legal and political limits of drone missile strikes, a mainstay of the campaign against terrorism.

The notion that the government can, in effect, execute one of its own citizens far from a combat zone, with no judicial process and based on secret intelligence, makes some legal authorities deeply uneasy.

To eavesdrop on the terrorism suspect who was added to the target list, the American-born radical cleric Anwar al-Awlaki, who is hiding in Yemen, intelligence agencies would have to get a court warrant. But designating him for death, as C.I.A. officials did early this year with the National Security Council’s approval, required no judicial review.

“Congress has protected Awlaki’s cellphone calls,” said Vicki Divoll, a former C.I.A. lawyer who now teaches at the United States Naval Academy. “But it has not provided any protections for his life. That makes no sense.”

Administration officials take the view that no legal or constitutional rights can protect Mr. Awlaki, a charismatic preacher who has said it is a religious duty to attack the United States and who the C.I.A. believes is actively plotting violence. The attempted bombing of Times Square on May 1 is the latest of more than a dozen terrorist plots in the West that investigators believe were inspired in part by Mr. Awlaki’s rhetoric.

“American citizenship doesn’t give you carte blanche to wage war against your own country,” said a counterterrorism official who discussed the classified program on condition of anonymity. “If you cast your lot with its enemies, you may well share their fate.”

President Obama, who campaigned for the presidency against George W. Bush-era interrogation and detention practices, has implicitly invited moral and legal scrutiny of his own policies.

But like the debate over torture during the Bush administration, public discussion of what officials call targeted killing has been limited by the secrecy of the C.I.A. drone program. Representative John F. Tierney, who on April 28 held the first Congressional hearing focused on the lawfulness of targeted killing, said he was determined to air the contentious questions publicly and possibly seek legislation to govern such operations.

The reported targeting of Mr. Awlaki “certainly raises the question of what rights a citizen has and what steps must be taken before he’s put on the list,” said Mr. Tierney, Democrat of Massachusetts and chairman of a House subcommittee on national security.

Counterterrorism officials, with the support of Democrats and Republicans in Congress, say the drone missile strikes have proved to be an extraordinarily successful weapon against militants in the tribal areas of Pakistan, the location of all the known C.I.A. strikes except one in Yemen in 2002. By their count, the missiles have killed more than 500 militants since 2008, and a few dozen nearby civilians.

In the fullest administration statement to date, Harold Koh, the State Department’s legal adviser, said in a March 24 speech the drone strikes against Al Qaeda and its allies were lawful as part of the military action authorized by Congress after the Sept. 11, 2001, attacks, as well as under the general principle of self-defense. By those rules, he said, such targeted killing was not assassination, which is banned by executive order.

But the disclosure last month by news organizations that Mr. Awlaki, 39, had been added to the C.I.A. kill list shifted the terms of the legal debate in several ways. He is located far from hostilities in Afghanistan and Pakistan, where the perpetrators of 9/11 are believed to be hiding.

He is alleged to be affiliated with a Yemeni branch of Al Qaeda. Intelligence analysts believe that only recently he began to help plot strikes, including the failed attempt to bomb an airliner on Dec. 25.

Most significantly, he is an American, born in New Mexico, arguably protected by the Fifth Amendment’s guarantee not to be “deprived of life, liberty, or property, without due process of law.” In a traditional war, anyone allied with the enemy, regardless of citizenship, is a legitimate target; German-Americans who fought with the Nazis in World War II were given no special treatment.

But Ms. Divoll, the former C.I.A. lawyer, said some judicial process should be required before the government kills an American away from a traditional battlefield. In addition, she offered a practical argument for a review outside the executive branch: avoiding mistakes.

She noted media reports that C.I.A. officers in 2004 seized a German citizen, Khaled el-Masri, and held him in Afghanistan for months before acknowledging that they had grabbed the wrong man. “What if we had put him on the kill list?” she asked.

Another former C.I.A. lawyer, John Radsan, said prior judicial review of additions to the target list might be unconstitutional. “That sort of review goes to the core of presidential power,” he said. But Mr. Radsan, who teaches at the William Mitchell College of Law in St. Paul, said every drone strike should be subject to rigorous internal checks to be “sure beyond a reasonable doubt” that the target is an enemy combatant.

As for the question of whether Mr. Awlaki is a legitimate target, Mr. Radsan said the cleric might not resemble an American fighting in a Nazi uniform. “But if you imagine him making radio speeches for the Germans in World War II, there’s certainly a parallel,” he said.

Beyond the legal debate is the question of whether killing Mr. Awlaki would be a good idea. Many Muslim activists and scholars say it would accord him martyr status and amplify his violent message. Mohamed Elibiary, a Muslim community advocate in Texas who advises law enforcement on countering extremism, said helping the Yemeni authorities arrest Mr. Awlaki would make more sense. “I’m not saying this guy shouldn’t be treated as an enemy,” Mr. Elibiary said. “But there are smarter and stupider ways of eliminating your enemy.”

American officials say an arrest may not be possible. “If we need to stop dangerous terrorists who hide in remote parts of the world, inaccessible to U.S. troops, law enforcement, or any central government,” said the counterterrorism official, “what do you do — cover your ears and wait for a truly devastating explosion in Times Square?”