What Happened to the Tea Party Revolt Over the PATRIOT Act?

Last week saw the emergence of one of the dumbest recent political memes, the idea that the vote reauthorizing three expiring PATRIOT Act provisions failed because of Tea Party Republicans waging a principled anti-government rebellion against the party establishment.

What actually happened, as I wrote last week, was that the House was operating under rules used to pass "non-controversial" bills, making the chamber subject to the same two-thirds supermajority as the Senate. House Democrats, and a trickle of Republicans, essentially filibustered the bill. But yesterday, voting under ordinary rules, the PATRIOT Act passed easily -- with a majority of Republicans voting in favor, and a majority of Democrats voting against.

Over at the Monkey Cage, political scientists Hans Noel, Michael Bailey and Jonathan Mummolo put together a chart showing how Democrats, Republicans, and Tea Party Republicans voted on the bill last week: 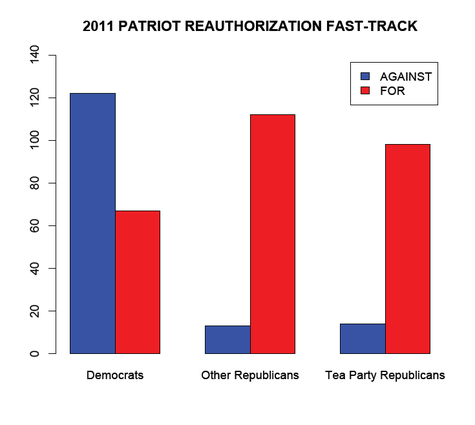 As they write, "It's hard to look at this as saying the Tea Party is in any way different from the rest of the Republican Party." It's also rather impossible to suggest that last week's vote reflected some sort of consistent, principled anti-statism on the part of Republicans. If anything, the common denominator between Republicans' unqualified hatred of the welfare state and support for the surveillance state is a sheer lack of empathy. Just as they can't imagine ever needing unemployment insurance or Medicaid, they can't imagine ever being subject to abuse through over-broad powers given to law enforcement. After all, unless you're a criminal, you have nothing to hide.The bill now goes to the Senate, where, hopefully, some of Vermont Democratic Senator Patrick Leahy's oversight reforms will make it past his Democratic and Republican colleagues and into the final bill.