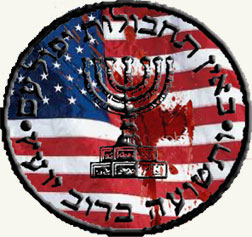 The principle propaganda mouthpiece of the Presidents of Major American Jewish Organizations (PMAJO), the Daily Alert (DA), has come out in full support for Israel’s practice of extra-judicial, extra-territorial assassination.

In the face of world-wide governmental condemnation (except from the Zionist-occupied White House and US Congress), the PMAJO slavishly backs any brutal murder committed by the Israeli secret police anywhere in the world and at anytime. The recent assassination of Hamas leader, Mahmoud Mabhouh, in Dubai is a case in point. The PMAJO has defended all of Mossad’s criminal actions leading up to the murder, including extensive identity theft and the stealing or falsification of passports and official documents from several European countries, presumably allied to the Zionist state. Among the Mossad agents who entered Dubai to kill Mabhouh, twelve agents used stolen or forged British passports, three Australian, three French, one German and six Irish. These agents assumed the identity of European citizens in order to commit murder in a sovereign nation.

Once again the PMAJO demonstrate that its first loyalty is to the Israeli secret police, even when they violate the sovereignty of major US allies. No doubt the PMAJO would readily support the Israeli Mossad, even if it were shown to have used U.S. documents to assassinate Mabhouh. In fact, two of the 26 Israeli assassins, carrying fake Irish and fake British passports, are known to have entered the United States after the killing and may still be here.

The position adopted by the Daily Alert and the PMAJO in defense of Israel’s international terrorist act followed several lines of attack, which will be discussed below. ...

Abridged articles, cited in the Daily Alert, have appeared in the op-ed pages of several US, UK, Canadian and Israeli newspapers, as well as in rightwing magazines like Forbes and Commentary. The mainline Zionist propaganda technique is to avoid any discussion of Israel’s egregious crimes against sovereignty, due process, international law and the personal security of individuals. In doing so, the Daily Alert adopts the propaganda techniques common to all totalitarian regimes practicing state terrorism.

On February 22, the Daily Alert (DA) headlined two articles, which were entitled: “Killed Hamas Official betrayed by Associates says Dubai Police Chief” and “Hamas: Assassinated Operative put Himself at Risk”. The DA forgot to mention that Israeli secret police had been tracking their prey for over a month (having failed to assassinate him on six previous attempts) and that the Dubai Police Chief was not blaming Hamas officials but was in the process of accumulating evidence, witness statements, videos and documents proving the Israeli identities of the assassins. Needless to say, if we were to accept the American Zionists’ argument that any leading opponent of Israel, who travels without an army of bodyguards, is “putting himself at risk”, then we must acknowledge that ours is a lawless world where Israeli hit squads are free to commit murder anywhere, any time.

(2) Extra-Judicial, Extra territorial Murder is “Legal” (At least if the killers are Mossad)

The February 22 and February 24 issues of the DA include two articles arguing that Israel’s practice of extra-judicial, extra-territorial murder is legal. One article is entitled, “The Legality of Killing of Hamas Mahmoud al Mabhoud” and the other, “The Proportionate Killing of Mahmoud al Mabhoud”. These avoid any reference to international law, which emphatically rejects cross-border, state-sponsored murders. Legality, for the PMAJO, is whatever the Israel’s secret police apparatus deems expedient in pursuit of its goal of eliminating leaders who oppose its colonial occupation and expropriation of Palestinian lands. If Israel’s extra-judicial, extra-territorial murder of an adversary in Dubai is legal, why not assassinate opponents in the US, Canada, England or any other country where they might travel, live, work or write? What if the critics and opponents of Israel decided that it was now “legal” to murder Israel’s supporters wherever they lived citing the Daily Alert’s definition of legality? We would then find ourselves in a lawless world of “legal” murder and totalitarian cross-border surveillance.

The Feb 22, 24, and 25 issues of the Daily Alert deflect attention from the Mossad murder by making comparison to the hundreds of Afghan civilians killed by US drone attacks. The claim is that “targeting individuals” is less a crime than mass killings. The problem with this argument is that for decades Mossad has “targeted” scores of opponents overseas and killed thousands of Palestinians in the occupied territories (where they work with the domestic secret police, Shin Bet, and the military, IDF). Moreover, this argument linking Israel’s extra judicial assassinations with US colonial killing of Afghans is hardly a defense of either. By implicating the US in its defense of state terror, Israel is holding up the worst aspects of American imperialism as a standard for its own political behavior. One state’s crimes are no justification for another’s.

The DA Feb. 22 article entitled “The Assassination Heard Around the World” insinuates that the murder was a “result of a Hamas power struggle” or by one of “many Arab groups who loathes the Islamist Hamas”.

In other words, all the forged or stolen European passports of Israeli dual citizens, and the Dubai security videos of Mossad operatives in various costumes, not to mention the jubilant affirmation by top Israeli leaders of the killing, was in reality ‘Arab tricks’. This crude propaganda ploy by the most prominent Jewish American organization reveals their own descent into a fantasy land of self-delusion, possible only in the closed world of US Zionist politics.

The DA published several articles praising the technical details of the Mossad assassination in Dubai, an aspect of the operation, with which few Israel security experts would agree. The Feb. 24 DA article entitled, “Assassination Shows Skillful Planning” chastises Israel’s critics for not recognizing the high quality of the “operational aspects” of the killings and recommends its “lessons for all intelligence services around the world”. Like sociopaths and serial killers, US Zionists openly promote Israeli death squad techniques to all fellow state terrorists. In the DA, professional techniques of assassination are far more important than universal moral repugnance of political murders.

(6) Discrediting the Investigators While Defending the Perpetrators

The DA on Feb. 25 cited a long and tendentious attack on the Dubai police, published in Forbes Magazine, which ridiculed their meticulous investigations uncovering Mossad’s roles in the murder. In this article, the Dubai authorities were condemned for uncovering Israeli involvement while not investigating the source of the murder victims’ … Iraqi passport! Instead of encouraging the Dubai police pursuit of justice, the Daily Alert published a long diatribe implicating Dubai in the attacks of 9/11/2001, its continued trade with Iran, its ‘involvement’ in international terrorism etc. There was no mention of Dubai’s relatively friendly position to Israel and Israelis prior to Mossad’s blatant violation of its sovereignty.

The American Zionist propaganda campaign in defense of Israeli state terror and, specifically, Mossad’s murder of a Hamas leader in Dubai, relies on lies, evasions and specious legal arguments. This “defense” violates all precepts of a civilized society as well as the most recent American federal laws prohibiting all forms of support for international terrorism. The PMAJO can pursue its defense of Mossad’s acts of international terrorism with impunity in the US because of its power over the US Congress, the Obama White House and the American mass media. This ensures that only its version of events, its definition of legality and its lies will be heard by legislators, echoed by Zionist activists and embellished by its solemn defenders in academic and journalistic circles. To counter the American Zionist defense of Israel’s practice of extra-territorial, extra-judicial executions by the Mossad, we need American writers and academics to step forward. It is time to expose their flimsy arguments, bold-face lies and audacious immorality. It is time to speak out against their impunity, before another Israeli secret police murder takes place, possibly inside the USA itself and with the shameless complicity of Zionist accomplices.

The authorities in Dubai have found clear evidence that the Mossad assassination team received support from European Zionists. The hotels, air tickets and expenses were paid with credit cards issued in the US. Two of the killers may be in the US now. Will a time come when American Zionists, who are unconditional public defenders of Mossad killings, cross the line between propaganda for the deed to become accomplices of the deed?

The robust American Zionist defense of Mossad’s overseas assassinations does not augur well for the security of Americans in the face of Israel’s willing U.S. accomplices.

James Petras is the author of over 62 books published in 29 languages, and over 600 articles in professional journals, including the American Sociological Review, British Journal of Sociology, Social Research, and Journal of Peasant Studies. He has published over 2000 articles in nonprofessional journals such as the New York Times, The Guardian, The Nation, Christian Science Monitor, Foreign Policy, New Left Review, Partisan Review, TempsModerne, Le Monde Diplomatique, and his commentary is widely carried out in the Internet. James Petras is a former professor of Sociology at Binghamton University, New York, has a 50-year membership in the class struggle, the author is an advisor to the landless and jobless in Brazil and Argentina and is co - of Globalization Unmasked (Zed Books) and Zionism, Militarism and the Decline of U.S. Power (Clarity Press, 2008). Look for James Petras latest book Global Depression and regional wars: the United States, Latin America and the Middle East (Clarity Press, September 2009)

So you like to publish articles by a Jew hater.