Why Did Former Bush-Administration Official Wind Up Dead In A Delaware Landfill? - The Constantine Report
0 SHARES

American Terrorism » Why Did Former Bush-Administration Official Wind Up Dead In A Delaware Landfill?

Why Did Former Bush-Administration Official Wind Up Dead In A Delaware Landfill?

Caveat: This is arguably premature, but it does dig into John Wheeler's connections to treacherous military contractors, a reasonable enough place to begin the investigation into his murder, and for this reason I've posted an excerpt. The lead suspect, as Roger Shuler sees it, is Boeing - but an equally plausible hypothesis might involve Lockheed-Martin: "Wheeler was one of the only Air Force insiders who in recent years had become very vocal in opposition to the Joint Strike Fighter," writes one commentator to news of Wheeler's death. "The JSF(F-35) is the biggest and most expensive defence acquistion program in the history of the world. It is hundreds of $billions over budget and years behind schedule. It is known as a project too big to fail, heard that one before? Mr. Wheeler had called for the cancelling of the F-35B, the USMCs version, and drastic reduction of funding to the primary contractor Lockheed-Martin. He was not a very popular guy to the defence industry." It's a big industry, and it is in the business of killing. It's the logical place to start. - AC 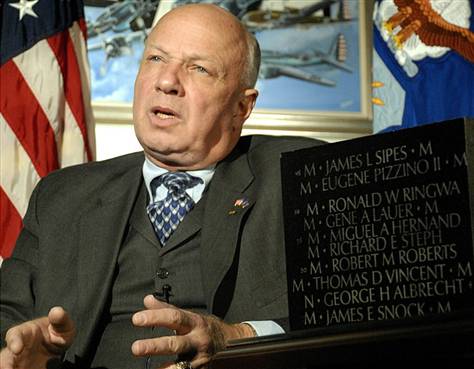 A former Bush-administration official has turned up dead, his body found in a Delaware landfill, and police are calling it a homicide.

John P. Wheeler III, 66, had extensive experience with defense and foreign-policy issues. Wheeler's biography indicates he had particular expertise in the areas of aerospace, technology, and logistics.

The Delaware murder raises an eyebrow for a couple of reasons: (1) We've written about the mysterious deaths of at least four Alabamians in the past year with connections to outgoing Republican Governor Bob Riley; (2) We've reported on the battle between Boeing and the European Aeronautic Defence and Space Co. (EADS) for a $35-billion Air Force tanker contract and noted its possible corrupting influence on Alabama politics.

... If EADS wins the contract, the tanker planes will be built in Mobile, Alabama. Gov. Riley has played a prominent role in trying to secure the deal for his state, while U.S. Senators Jeff Sessions and Richard Shelby have led the push in D.C.

According to recent press reports, the winner of the tanker contract is expected to be announced early in 2011. One Alabama report says EADS is in the lead, and the company has said it is moving forward with construction plans in Mobile. Just before Christmas, Gulf Coast political leaders claimed Boeing supporters were trying to "sabotage" the deal with 11th-hour maneuvering in Congress.

Where might John P. Wheeler have fit into all of this? His biography indicates he was the kind of person who might have had knowledge about issues surrounding the Boeing/EADS battle. He currently worked as a defense consultant and served as special assistant to the Secretary of the Air Force from 2005 to 2008. A graduate of the U.S. Military Academy at West Point, Wheeler had served on the Council of Foreign Relations and played a leading role in supporting the Vietnam Veterans Memorial in Washington, D.C.

Wheeler had a distinguished career in both the public and private sectors, and this line from his bio jumps out at us:

His career combines federal service and starting up, growing and turning around companies and charities. He was Secretary, U.S. Securities and Exchange Commission, on the team that worked major insider trader investigations, and consultant to the acting Under Secretary of Defense for Acquisition, Technology and Logistics regarding tankers and other issues.

Wheeler clearly had strong knowledge about tankers, their use and acquisition. Starting in 2009, he became a consultant for Mitre Corporation, a not-for-profit organization that manages federally funded research and development centers. Mitre currently operates such centers for the U.S. Departments of Defense, Veterans Affairs, and Homeland Security, along with the IRS and the Federal Aviation Administration.

One of Mitre's components is the Center for Advanced Aviation System Development (CAASD), which is based in McLean, Virginia.  Our research has found reports of alliances between Boeing and Mitre/CAASD--and that, of course, is not surprising considering Boeing's prominence in the American aerospace industry.

We are left, for now, with this question: Did John Wheeler, through his consultancy with Mitre, become an advocate for Boeing in the tanker-contract battle? Did that contribute to his puzzling and grisly death? Delawareonline.com reports:

Friends and neighbors were shocked to learn Wheeler had been murdered.

Wheeler worked in Washington, D.C., and was returning home to Delaware on an Amtrak train last Tuesday night. His body was discovered at the Cherry Island landfill on New Year's Eve and identified the next day. He was last seen getting off the Amtrak train in Wilmington.

Alabama, it turns out, is not the only place where suspicious deaths are starting to pile up. They also are piling up in the D.C. area. In late September, Department of Justice lawyer Nicholas Marsh died of an apparent suicide. Marsh was under investigation for his role in the botched Ted Stevens case in Alaska, and Marsh's lawyer, Robert Luskin, had represented former Bush White House strategist Karl Rove. Marsh's death has been described as a self-induced hanging, but the story apparently has received almost no serious inquiry in the mainstream press. ...