OUR OPINION: Solving murders must be a top priority. 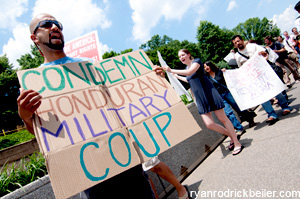 Honduran radio reporter Israel Zelaya Díaz was found dead Tuesday night on the side of a rural road in San Pedro Sula, making him at least the eighth journalist killed in that country this year.

If past killings are any guide, his murder will go unsolved. A Committee to Protect Journalists' examination of the cases shows a ``pattern of botched and negligent investigative work'' -- that's if you consider exhuming a body three months after a murder to conduct an outdoor graveside autopsy an ``investigation.'' That was the treatment given to Nahúm Palacios Arteaga, a TV reporter killed in March.

That month proved to be the deadliest for Honduran journalists: One died each week. Disc jockey Luis Antonio Chévez was killed a month later, a murder that -- if linked to his work -- would raise the death toll to nine.

This string of senseless killings comes at an awkward time for Honduran President Porfirio `Pepe'' Lobo. Just seven months on the job, Mr. Lobo is struggling to achieve international acceptance for his country. Rival truth commissions are running parallel investigations into the 2009 coup that preceded his election, and activists are still waiting for justice in murder cases linked to last year's crisis.

Living under a cloud

Mr. Lobo is eager to peddle the public image that Honduras is back in business after the June 2009 upheaval crippled the nation's economy for seven months.

As long as that nation's journalists continue to live under a cloud of fear and uncertainty, Mr. Lobo's hopes for his country are bound to remain unfulfilled.

To his credit, Mr. Lobo has taken important first steps. He appointed a human rights minister to his cabinet and invited a Spanish judge to review the investigation into the reporters' killings.

The FBI has been called in to help, a welcome move if only for symbolic reasons. Honduran investigators were so desperate for evidence to show U.S. federal agents, that they scrambled months after the murders to collect clues and compile crime scene photos, CPJ found. Hence the graveside post mortem.

Although warrants are out in several cases, only one arrest has been made. A businessman charged in one reporter's death was released Wednesday for lack of evidence.

If Mr. Lobo really wants to improve Honduras' image, he should start by making the journalists' killings a priority and end Honduras' shameful record of sloppy investigations. Inept investigators must be re-trained and provided adequate resources.

Human Rights Minister Ana Pineda suggests the murders are a natural byproduct of the ``climate of insecurity created by organized crime and common crime in Central America.'' While Honduras has the highest per capita murder rate in the world, such comments by top ministers suggest the government may want to sweep the cases under the rug.

There's no evidence that the journalists were victims of a government death squad, Pineda stresses. Without a rigorous investigation, such blanket statements lack credibility. And even if true, that's no reason to downplay the killings.

The unsolved murders suggest a deeper breakdown of law and order and undermine Honduras' desire to put last year's political violence behind it. Several countries in the region have yet to recognize Mr. Lobo's presidency, and at this rate they're not likely to do so.

Putting a stop to the murders of journalists and resolving the pending cases should be a condition for acceptance in regional groups such as the Organization of American States.

The international community should demand no less.