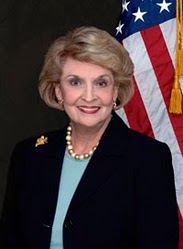 CLARKESVILLE, Ga. (BP)--Nancy Schaefer, 73, a conservative activist and former officer of the Georgia Baptist Convention, and her husband Bruce, 74, died March 26 of gunshot wounds in their north Georgia home.

A daughter discovered the bodies in the bedroom of their home in Habersham County.

The Atlanta Journal-Constitution reported that the Georgia Bureau of Investigation had ruled the deaths a murder-suicide in which Bruce Schaefer allegedly killed his wife, then himself.

However, at least one friend of the Schaefers has questioned the murder-suicide theory. Garland Favorito, founder of Voters Organized for Trusted Election Results in Georgia (VoterGA), circulated an 11-point, two-page bulletin via the Internet stating it is "more obvious" that the case is a "murder made to look like suicide."

Favorito cited the Christian faith and pro-life beliefs of the Schaeffers and the fact that Nancy Schaeffer had been delving into alleged corruption in family & child services agencies. Favorito's bulletin listed a link to YouTube where Schaeffer had been voicing her various concerns: http://www.youtube.com/results?search_query=nancy+schaefer&search_type=&aq=f.

The Schaefers were members of Ebenezer Baptist Church in Toccoa, where funeral services will be held March 31.

Schaefer served as first vice president of the GBC in 1991 and, on the national level, for eight years as a trustee of the Southern Baptist Ethics & Religious Liberty Commission. She has also served as president of the Georgia chapter of the Eagle Forum.

Schaefer lost her Senate seat in 2009 after representing Georgia's 50th district for two terms. She previously had been a candidate for Georgia governor, lieutenant governor and mayor of Atlanta.

In 1986 she founded Schaefer Family Concerns, Inc., a nonprofit foundation dedicated to issues such as display of the Ten Commandments in public buildings and opposition to abortion, according to the Atlanta newspaper. Sadie Fields, who chairs the Georgia Christian Alliance, described Shaefer as "a stalwart of conservative causes in Georgia."

Reported by the staff of Baptist Press and The Christian Index, newsjournal of the Georgia Baptist Convention.

Habersham County Sheriff Joey Terrell said today there is no clear reason for Friday's murder/suicide that took the lives of Bruce "Bear" Schaefer and Nancy Smith Schaefer of The Orchard near Turnerville.Bruce Schaefer left a four-page suicide note, as well as several letters addressed to family members.

"I haven't read the letters, the suicide note," Terrell said, noting that those documents were turned over to the Georgia Bureau of Investigation which, at Terrell's request, sent six officers and three crime scene specialists to the home to conduct an investigation into the deaths. Terrell said it is unclear whether those letters and four-page note establish a reason for Bruce Schaefer, 74, shooting Nancy Schaefer, 73, in the back as she slept, then turning the gun on himself, shooting himself in the chest.

Terrell said it's possible that financial problems played a role in the tragedy, though he can't say for sure.

A report quoting a friend of the Schaefers that stated Bruce Schaefer had a serious, even terminal, illness was inaccurate, Terrell said.

"At least as far as the family knew, he wasn't suffering from an illness," Terrell said. "If he was sick, he was hiding it from the family."

Asked again if a motive has been established, Terrell said, "the motive is unclear at this point - we may never know."

(WSB Radio/AP) Investigators with the GBI and the Habersham County Sheriff's Department can't find any evidence that the husband of former State Senator Nancy Schaefer was suffering from a terminal illness when he shot her in the back and then killed himself in their Clarksville home.

Habersham County Sheriff Joel Terrell told the Atlanta Journal-Constitution "talking with the family, talking with the daughter who saw them about every other day, they didn't know anything about it (an illness)."

Bruce Schaefer, 74, shot Nancy Schaefer, 73, once in the back while she slept and then shot himself in the head. Investigators believe the murder-suicide occurred sometime Thursday night or Friday morning.

GBI spokesman John Bankhead said in a prepared statement that investigators found a handgun near Bruce Schaefer's body and several letters written by Schaefer to family members, including a suicide note.

Sheriff Terrell said "some financial problems were mentioned" in the notes left behind by Bruce Schaefer. But he said "he had seen nothing so far that establishes a clear motive."

Funeral services for Bruce and Nancy Schaefer will be Wednesday afternoon at 1pm at the Ebenezer Baptist Church Family Life Center in Toccoa.