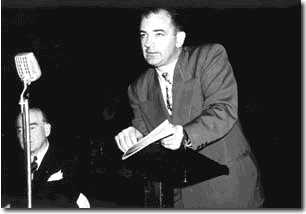 We all have our heroes, but somehow Joe McCarthy is not  widely lionized in this backward society.  This is the cry of  Bruce Walker, wringing his hands in last month's New American. Walker once wrote a column for the Birch Society house organ entitled, "Nazis & Communists: Ideological Bedfellows," so it's clear that confusion is a way of life for him, not a temporary condition.

But Mr. Walker thinks that the confusion is our own:

"There is a powerful vested interest that many in America have in keeping the reputation of Senator McCarthy soiled, whatever the historical evidence shows. Supposedly, McCarthy abused his vast powers as a senator to destroy innocent reputations. Rarely do his opponents stop to consider, even in passing, the obvious facts of his career."

McCarthy's career ... including collaboration with old guard Nazis and domestic fascists. A few years ago, it so happens that I looked into all that:

" ... Joseph McCarthy, the eye of the anti-Communist sturm und drang, was a hands-on Nazi collaborator, having freed German war criminals interred by the Allies at the end of the war.

"The late Mae Brussell: 'Senator Joe McCarthy’s two strongest supporters [in his Senate campaign] were Frank Seusenbrenner and Walter Harnisfeger. Both admired Adolf Hitler and made continuous trips to Germany…. Before he went after the Commies in the State Department, he had to release a few of Hitler’s elite nazis lingering in the Dachau prison camp…. In 1949, during congressional hearings on the Malmedy Massacre … McCarthy invited himself to take over the entire testimony. He wasn’t satisfied until the prison doors flew open. The most detestable and ugly battle of World War II, an assault upon Americans and civilians in Belgium, was ignored. Hitler’s precious Generals Fritz Kraemer and Sepp Dietrick, along with Hermann Priess and many others, were free. With that business finished, McCarthy took on Robert Morris as chief counsel for the Senate Internal Security Subcommittee. Morris’ earlier training in Navy Intelligence in charge of USSR counter-intelligence and psychological warfare could be utilized well by Senator Joe. Particularly the psychological warfare part. After McCarthy died, Morris moved to Dallas, Texas. He was a judge, and became president of Dallas University…. '

"One Nazi in particular, Nikolai Poppe, made a massive contribution to the right-wing furor over communism in the States. Poppe was a spy attached to Himmler’s SS, assigned to the confiscation of Jewish property, director of the Wansee Institute (a think-tank that conducted studies on the USSR for the SS). In the postwar calm, Poppe went on to become a scholar at the University of Seattle, a well-known author on Tibetan Buddhism, a CIA expert on Mongolia.

"Nazi Poppe participated in the most important case in McCarthy’s alcohol-soaked career as an anti-communist. From Christopher Simpson in Blowback: America’s Recruitment of Nazis and its Effects on the Cold War (Weidenfeld & Nicolson, 1988): 'An incident during Poppe’s career in the 1950s illustrates the DELICATE INFLUENCE that certain Nazi collaborators have had on domestic politics in the United States. Early in the McCarthy era, Professor Owen Lattimore, the director of the Walter Hines Page School of International Relations at Johns Hopkins University and a longtime advisor on Asian affairs to the State Department, was brought before a congressional investigation committee to face accusations of espionage and running a 'communist cell' in the Institute for Pacific Relations. McCarthy, whose allegations were already drawing criticism from Democrats and even a few Republicans, had pledged that HIS ENTIRE ANTI-COMMUNIST CRUSADE WOULD 'STAND OR FALL' on the supposed proof he had in the Lattimore case…. "

These are a few of the obvious (to anyone with a modem) facts of McCarthy's heroic career. But far-right Walker is sticking wth Gunner Joe, because, don't y'know, "indeed, Soviet agents penetrated American government, American institutions, and American life."  (It's perfectly acceptable if real Nazi agents penetrate the government, but fictitious communist spies were a dire threat to national security.)

Mind you, it was the latent Cold War '50s - the Army's Operation Paperclip had recruited Nazi doctors from Dachau to perform illicit and risky human experiments on "Our Boys" at Edgwood Arsenal. Otto von Bolschwing of the Waffen SS set up shop in what would become the Silicon Valley, with CIA sponsorship, where, 2o years on, he would pull off an immense stock swindle, and supply a front for the Iran contra affair under Reagan. Klaus Barbie, another CIA asset, would crop up in Argentina in a few years and flood American streets with cocaine. ETC. ETC. ETC. The Russians had no operations in the United States worth mentioning compared to the destruction by European import done to this country with its ongoing fascist pacts and Nazi die-hards on the U.S. payroll.

Ideological witch hunts complete with ruined careers and Nazi spies don't seem  to concern Walker, though. He's a Bircher fascist himself, but doesn't care to reveal the ideological core of his bias. Like all American ultra-conservatives, he hates communists. What else is new? (Nazis and Communists are not  really ideological bedfellows, after all, as I say - unless Walker lays down with hippy Trotskyites, and that's pretty doubtful.)

He says that he thinks a Red Russian occupation of the U.S. had "catastrophic consequences" ... no time to explain the great destruction done to America by Russian agents during the Cold War. (There was Martin Luth ... uh, well ... no ... satanic Beatle mus ... Well, there was flouride ... )

Walker notes:  "Joseph McCarthy maintained a steadfast faith in God." (Believing in a higher power instantly transforms one into a decent drunk, goes without saying. )  McCarthy, the paragon, "knew just how horrific a price mankind had paid" since the rise of demonic communism. Or did Joseph McCartthy's  German spy circle know a bit more about horrific consequences paid by mankind than Russia's phantom conspirators did any day?

Obvious, really, but the corporate fascists at the Birch Society only see red, like that sociopathic sot McCarthy.