“The public has been shocked, wondering how methyl iodide could be approved under California law. The truth is that DPR played too fast and loose with their decision,” said Earthjustice attorney Greg Loarie. “They exceeded their legal authority and have put the public and farmworkers at great risk of harm.”

SAN FRANCISCO–(ENEWSPF)–January 4 – On Governor Brown’s first day in office, a coalition of  farmworkers, community advocates and environmental health organizations are announcing a lawsuit to challenge the state’s approval of the cancer-causing strawberry pesticide methyl iodide. Several of the organizations also submitted comments from over 52,000 members of the public urging him to act quickly to prevent the use of methyl iodide in California’s fields.

The suit challenges the state Department of Pesticide Regulation’s (DPR) December 20 approval of methyl iodide for use in California on the grounds that it violates the California Environmental Quality Act, the California Birth Defects Prevention Act, and the Pesticide Contamination Prevention Act that protects groundwater against pesticide pollution. In addition, the suit contends that DPR violated the law requiring involvement of the Office of Environmental Health Hazard Assessment (OEHHA) in the development of farmworker safety regulations and made an unlawful finding of emergency with its request for Restricted Materials status for methyl iodide.

“The public has been shocked, wondering how methyl iodide could be approved under California law. The truth is that DPR played too fast and loose with their decision,” said Earthjustice attorney Greg Loarie. “They exceeded their legal authority and have put the public and farmworkers at great risk of harm.”

In deciding to approve methyl iodide, DPR shunned the findings of top scientists—including the state’s own Scientific Review Committee—who have consistently said that the chemical is too dangerous to be used in agriculture. Upon hearing the decision, Dr. John Froines, chair of the Committee, told press, “I honestly think that this chemical will cause disease and illness. And so does everyone else on the committee.”

Theodore Slotkin, another panel member and professor of pharmacology and cancer biology at Duke University, wrote, “It is my personal opinion that this decision will result in serious harm to California citizens, and most especially to children.”

“Farmworkers are on the front lines of methyl iodide use and will suffer the most tragic consequences,” observed Erik Nicholson, National Vice-President of United Farm Workers. “If this decision is allowed to stand, strawberries may very well become the new poster child for giving farmworkers cancer and late term miscarriages.”

Crumbling under pressure from an intensive pro-methyl-iodide lobbying campaign run by Arysta LifeScience—methyl iodide’s manufacturer and the largest privately held pesticide company in the world—DPR fast-tracked the registration process by declaring an “emergency.” DPR’s only stated explanation for the “emergency” was that it wanted to register methyl iodide on December 20. 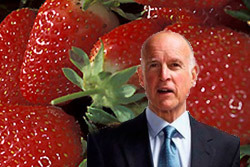 “DPR created a political ‘emergency’ by insisting on locking-in its decision before a new administration takes office – an administration that would follow the science instead of catering to the largest private agrochemical corporation in the world,” said Mike Meuter, Attorney at California Rural Legal Assistance, Inc. “DPR’s move has no legal basis: political convenience does not constitute an emergency.”

The ‘emergency’ registration blocked the otherwise necessary public comment period on the decision, despite the public’s strong desire for input. Last summer, over 53,000 people urged California not to legalize the pesticide. Today, an additional 52,000 comments were submitted by Pesticide Action Network North America, Breast Cancer Action, CREDO, Food and Water Watch and others urging Governor Brown to reverse the decision to register methyl iodide.

“We expect Governor Brown to do much better than his predecessor, whose environmental legacy is defined by hypocrisy,” said Paul Towers, State Director of Pesticide Watch Education Fund. “Schwarzenegger’s move to promote the elimination of plastic bags but approve—on the very same day—the use of one of the most toxic chemicals on earth in California’s fields has permanently tarnished his environmental record.”

Methyl iodide causes late term miscarriages, contaminates groundwater and is so reliably carcinogenic that it’s used to create cancer cells in laboratories. It is included in California’s Proposition 65 list of “chemicals known to cause cancer.” The pesticide poses the most direct risks to farm workers and neighboring communities because of the volume that would be applied to fields and its tendency to drift off site through the air.

The chemical is approved to be applied to California’s strawberry fields at rates up to 100 pounds per acre on much of the state’s 38,000 acres in strawberry production, totaling millions of pounds of use. Though methyl iodide will likely be used primarily on strawberries, it is also registered for use on tomatoes, peppers, nurseries and on soils prior to replanting orchards and vineyards.

“It’s farmworkers like me who become sick,” said plaintiff Jose Hidalgo. “As a strawberry picker, I have worked near many pesticide applications. First we smell the pesticides. Then our eyes burn, our noses run and our throats hurt. I’m against using methyl iodide because it’s already too dangerous in the fields, we don’t need new, even more dangerous, toxins.”

“Living near California’s strawberry fields just became even more deadly,” commented Lynda Uvari, Founding Board Member of Community and Children’s Advocates Against Pesticide Poisoning, a community group in Ventura County. “Will Arysta and DPR be there to help when people in our communities get cancer or lose their babies?”

“Given the special susceptibility of adolescents to this developmental toxicant, methyl iodide poses a special health risk to teenage children working in the fields or exposed to drift,” declared Lora Jo Foo, Legal Director of Worksafe.

In the last days of the Bush Administration in 2007, the U.S. Environmental Protection Agency (EPA) approved methyl iodide at the national level, ignoring concerns from over 50 eminent scientists—including six Nobel Laureates in Chemistry—who expressed astonishment in a letter to U.S. EPA that the agency was “working to legalize broadcast releases of one of the more toxic chemicals used in manufacturing into the environment.”

Arysta LifeScience pushed to secure registration of the pesticide in California because it is one of the most lucrative pesticide markets in the nation. New York and Washington states refused to register methyl iodide for agricultural purposes.

Previous Article
Why Did Former Bush-Administration Official Wind Up Dead In A Delaware Landfill?
Next Article
Marketing Genocide to Children in Nazi Germany