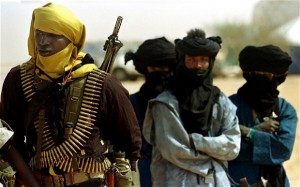 The recent Coup in Mali by a Army Officer Captain while all the Generals, Brigadiers, Colonels and Majors are nowhere to be seen or heard should not be seen in isolation or simplistically.

The Tuaregs living in Northern Mali, Northern Niger, Southern Algeria and southern Libya are a Nomadic Pastoral People with no ambitions for statehood, only recognition of their particular culture and freedom to travel without hindrance in the Saharan Region.

The conflict in Libya has had a devastating effect in Niger and Mali where the nomadic Tuareg peoples in the Sahara Desert regions of northern Niger and Mali and southern Libya have been involved in a spate of kidnappings and armed uprisings known as the ‘Tuareg rebellion’. This is especially dangerous for northern Niger in and around the town of Arlit, an industrial town located in the Agadez region, where uranium is mined by French companies in two large uranium mines (Arlit and Akouta).

Arlit was the subject of the Niger uranium forgeries when President George W. Bush, in the build-up to the (illegal) Iraq war, in his 2003 State of the Union address stated, ‘The British Government has learned that Saddam Hussein recently sought significant quantities of uranium from Africa,’ when it was alleged that Saddam Hussein had attempted to purchase ‘yellowcake’ uranium powder from Niger during the Iraq disarmament crisis. These 16 words and the intelligence in this regard were later found to be baseless and rubbished by US intelligence agencies, albeit too late for innocent Iraqis who lost their lives over a lie during the war years.

Ambassador Joseph Wilson, who travelled to Niger to investigate the Iraq/yellowcake plot, concluded that it was highly doubtful that any such transaction had ever taken place, thus clearing Saddam Hussein of any re-starting of Iraq’s WMD (weapons of mass destruction) programme. Ambassador Wilson was punished for this by the outing of his wife, Valerie Plame, as a CIA agent, allegedly by an official working in then vice-president Dick Cheney’s Oofice in the White House, which was also the plot of the movie ‘Fair Game’ released in 2010.

Put simply, this is about uranium to be found in the Tuareg areas of Mali, Niger and Libya, the next step will be UN/ECOWAS/NATO Peace-keepers, Military intervention and killing of thousands of Tuaregs.

Moeen Raoof is a Humanitarian & Emergency Aid Consultant and Conflict Analyst. He undertook an investigation of the Bush Yellowcake/Iraq claim prior to the Iraq invasion by traveling to Niger at the same time as Ambassador Wilson's Mission.