Excerpt from "Terror on the Right"

"War does not determine who is right -- only who is left." -- Bertrand Russell

IN THE BEGINNING of the GW Bush presidency was the word ... of neocons. Terrorism and war are centerpieces of neoconservative preoccupation, and the media are all too often their willing perception management playthings. Who doesn't recall with considerable shock and awe the steady, ubiquitous, decisive drumbeat that issued from the media in the buildup to the Iraq war?

A few years later, it was evident that America had bought itself another quagmire. The neocons went back to work to resell a lucrative war to a civilian population that was having its doubts. In 2007, PBS aired a neocon propaganda series with direct ties to the administration, “America at a Crossroads.” Segments included the hour-long, painfully jingoistic “The Case for War: In Defense of Freedom,” a celebration of the invasion of Iraq – scripted and narrated by Richard Perle, a fixture at the American Enterprise Institute (a CIA/military intelligence front), former assistant secretary of defense under Reagan, chairman of Bush's Defense Policy Board Advisory Committee. The program depicted opponents of the war as borderline personalities and “conspiracy theorists” in a sad state of mental disarray. And this was public television. Commercial media were even more cynical in their collusion with the Bush administration. General Paul E. Vallely -- a Fox News analyst who once co-authored a research paper, "From Psyop to MindWar: The Psychology of Victory," with San Francisco Satanist Michael Aquino -- was given generous airtime from 2001 to 2007 to promote the war and defend the administration with shaggy-dog apologias. (General Vallely is a psyop specialist who claims that the U.S. lost the Vietnam War because the media were polluted with “enemy propaganda” that undermined civilian confidence in the military.) CBS had Air Force General Joseph W. Ralston, vice-chairman of the Cohen Group, a consulting firm named after former Secretary of Defense William Cohen with a client roster that includes Lockheed-Martin and other oversized military contractors. Over at CNN, retired Army general James Marks, a war profiteer from McNeil Technologies, was retained as military analyst, 2004-2007. In the 2012 presidential race, Marks went on to become a national security advisor for Mitt Romney. The presence of Pentagon generals in the media – nine of them writing pro-war editorials for the New York Times alone – was arranged by former Hill & Knowlton general manager and Assistant Secretary of Defense (under Rumsfeld) Torie Clarke, a senior advisor to Comcast and on-air commentator at ABC. Clarke has served as press secretary to Senator John McCain. In 1982, she was a press assistant to then Vice President George H.W. Bush. Clarke’s Internet bio notes that she is “best known to the public as the chief spokesperson for the Pentagon on 9/11 and the beginning of the Iraq war,” architect of the media ‘embedding’ program in Iraq …

Clarke’s media manipulations did much to divide America into seething media tribes, each with its own set of second-hand talking points on war and terror. She was also the catalyst for the rise of General David Petraeus, who was guided in Iraq, of course, by leading neoconservatives. Clarke’s pool of military analysts constituted an unparalleled, five-plus year psyop surge. David Barstow at the New York Times wrote in 2008, “When David H Petraeus was appointed the commanding general in Iraq in January 2007, one of his early acts was to meet with the [Pentagon's retired military] analysts.” One of those “analysts” was retired US Army General Jack Keane, a "patron" to David  Petraeus in his ascent through the ranks – currently a senior advisor to Kohlberg, Kravis, Roberts, and a director of General Dynamics. Also Frederick Kagan from the American Enterprise Institute, the brains behind the “surge” strategy and a well-known neoconservative “intellectual.” Soon, across the channel spectrum, the press was singing his praises. But, Tom Engelhardt, a progressive critic of the war, wrote in October: "Here's the strange thing when you look more carefully at Petraeus's record (as others have indeed done over these last years), the actual results -- in Iraq, not Washington -- for each of his previous assignments proved dismal. What the record shows is a man who, after each tour of duty, seemed to manage to make it out of town just ahead of the posse, so that someone else always took the fall." On his stint in Mosul, former ambassador Peter Galbraith offered a sober counterpoint to the sighs of admiration in the mass media:

"As the American commander in Mosul in 2003 and 2004, he earned adulatory press coverage ... for taming the Sunni-majority city. Petraeus ignored warnings from America's Kurdish allies that he was appointing the wrong people to key positions in Mosul's local government and police. A few months after he left the city, the Petraeus-appointed local police commander defected to the insurgency while the Sunni Arab police handed their weapons and uniforms over en masse to the insurgents."

When it comes to Petraeus, the media always say one thing, reality says another. Mosul became an epicenter of insurgency in Iraq because General Petraeus handled matters there in an incompetent manner. After Mosul, his objective was to train the Iraq army to be self-sufficient.

Rod Nordland, who wrote a glowing cover story about the general for Newsweek in 2004, had second thoughts in 2007:

"[Petraeus] rose to fame not by his achievements but by his success in selling them as achievements. He's first of all a great communicator ... Training the Iraqi military and shifting responsibility to them was the mantra Petraeus sold to hundreds of credulous reporters and hundreds of even more credulous visiting CODELs (congressional delegations)... By the time he left, the training program was clearly on its way to spectacular failure. By the end of last year that had become received wisdom; it became convenient for the brass to blame the fiasco on the politically less popular and media-friendless General George Casey. Entire brigades of police had to be pulled off the street and retrained because they were evidently riddled with death squads and in some cases even with insurgents. The Iraqi army was all but useless, a feeble patient kept on life support by the American military."

The underrreported failures of General David Petraeus reflect the "guidance" he has received from neocons like Fred and Kimberly Kagan. Their foreign policy failures are now "our" failures, and not even all the King's neocons can clean them up. 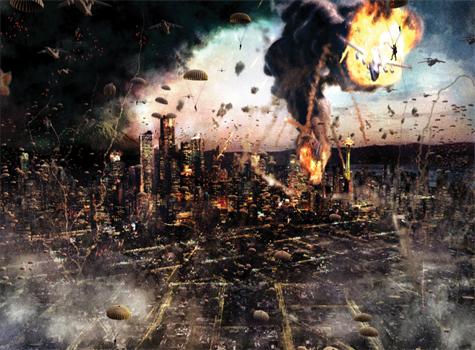 After the Broadwell scandal made headlines, the media tried to break his fall. A reporter at NPR enthused that Washington insiders are "in awe of him." But Petraeus' image is already tarnished by a routine sex scandal, and America has so much more to learn about the man behind the Madison Avenue gloss. Once again, conservatives will find that they have been wallowing in a world of illusion, but will go on to create more geopolitical disasters. The media will fall in line. Everyone will forget that the addled "conspiracy theorists" dismissed by Richard Perle were right all along. And more sacrificial victims of a war-profiteering "Complex" will fatten the bottom line. All that will be required is another Torie Clarke.