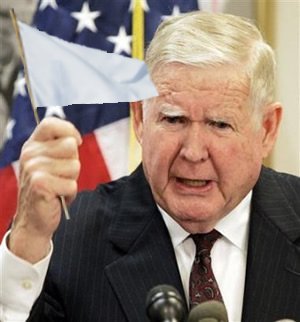 “… Federal Earmarks Fill Coffers of Pa. Nonprofit – Politics – Concurrent Technologies began two decades ago doing metalworking research in Pennsylvania’s struggling rust belt. In the years since, the Johnstown, Pa., company has become a federal contracting chameleon. BEHIND THE RISE OF CONCURRENT IS REP. JOHN MURTHA, who helped arrange funding to launch the organization in 1988. …” http://politics.propeller.com/story/2007/11/01/federal-earmarks-fill-coffers-of-pa-nonprofit

In 2007, Rep. Murtha inserted into the Energy and Water Appropriations bill a $1 million earmark to establish the Center for Instrumented Critical Infrastructure – a subsidiary of Concurrent Technologies Corporation, (CTC) a non-profit technology innovation center in Rep. Murtha’s district that has received hundreds of millions of dollars in earmarks in recent years. Contrary to Rep. Murtha claims, the Department of Energy has DENIED supporting the request for the earmark. CTC is a large non-profit that in 2005 received over $212 million in government grants. Since 2002, CTC’s employees and employees’ family members have donated over $115,000 to Rep. Murtha’s political committees and leadership PAC. By earmarking funds for companies represented by … CTC in return for campaign contributions, Rep. Murtha may have accepted BRIBES or ILLEGAL GRATUITIES, committed honest services FRAUD and violated House rules prohibiting members from dispensing SPECIAL FAVORS … ” http://www.beyonddelay.org/summaries/murtha.php

That is, Murtha is guilty of the same corrupt practices as the late Charles Reicher. Murtha is well-known for trading votes to fund pork projects like CTC:

Trading Votes for Pork Across the House Aisle

The bottom line of Murtha’s “charitable” fund-raising: “Johnstown’s good fortune has come at the expense of taxpayers everywhere else.” Murtha’s intimate involvement in CTC has caused a ruckus or two in Johnston, PA: “No one could say the hamlet of Johnstown, population 27,000, couldn’t use the cash. … Defense contractors have found that if they open an office there and hire the right lobbyist, they can get lucrative, no-bid contracts. Over the past decade, CONCURRENT Techologies Corp., a defense-research firm that employs 800 people, got hundreds of millions of dollars THANKS TO MURTHA, DESPITE POOR REVIEWS by Pentagon auditors. The National Drug Intelligence Center, with 300 workers, got $509 million, though the White House has tried for years to shut it down as wasteful and unnecessary, the paper reports. Murtha refuses to apologize. At a breakfast fundraiser this summer in Johnstown, he said that bringing federal dollars there ‘is the whole goddamn reason I went to Washington.’ And this is about the most G-rated thing that the Congressman — who ‘curses like the Parris Island drill sergeant he once was’ — utters in the whole article.” http://www.cbsnews.com/stories/2007/10/30/the_skinny/main3428993.shtml From the CTC site: “Concurrent Technologies Corporation (CTC) offers a broad range of services and capabilities. Areas of expertise include … Command, control, communications, computers, intelligence, surveillance and reconnaissance (C4ISR), Force readiness … ”

Some Clients of Concurrent Technologies Corp.

Is this a company interested in charity? The company itself is a “non-profit,” but it operates for-profit affiliates, for instance: ” … CTC Enterprise Ventures Corporation (EVC) Enterprise Ventures Corporation (EVC) is a for-profit organization that acts as the technology commercialization arm for CTC. The mission of EVC is to TRANSFER ADVANCED TECHNOLOGIES TO THE INDUSTRIAL BASE and to deliver high-technology products and services to our clients. …” http://www.ctc.com/partnerwithctc/affiliates.cfm

“General Nilo has more than 30 years of experience in CBRN defense including service as the acting Deputy Assistant to the Secretary of Defense for Chemical/Biological Defense and as the Chief of the U.S. Army Chemical Corps and Commandant of the U.S. Army Chemical School. Her responsibilities will include the continued positioning of CTC as a leading provider of CBRN technologies, products, and expertise to the U.S. Government.

“Prior to her retirement, Nilo served as acting Deputy Assistant to the Secretary of Defense for Chemical/Biological Defense at the Pentagon, Washington, D.C. She was responsible for managing the $7.2 billion medical and nonmedical CBRN defense program within the Office of the Secretary of Defense and for coordinating requirements with other government inter-agencies. Immediately prior to that, she served as Chief of the U.S. Army Chemical Corps and Commandant of the U.S. Army Chemical School, Fort Leonard Wood, Missouri …. [“CTC Appoints Brigadier General Patricia L. Nilo, USA Retired, as Principal Technical Advisor for Chemical, Biological, Radiological and Nuclear (CBRN) Defense Programs,” press release, June 19, 2006 http://www.ctc.com/news/2006/06jun19_pr.cfm] This “Tax-Exempt Charity” Makes Spies Even More Intrusive:

• A microwave radar is under development to achieve imaging of moving and stationary targets through visually opaque obstacles such as walls.

• Signal Processing methods are being developed to enhance the signal-to- clutter ratio, improve two-dimensional imaging resolution, distinguish targets of interest from others, and obtain fast and simplified implementations of the designed algorithms. http://www.villanova.edu/engineering/assets/documents/cac/sponsors/darpa.pdf