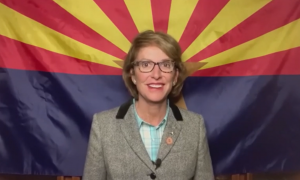 A Republican state senator fawned over the leader of a white nationalist movement on Friday and told his followers that she fantasizes about hanging her perceived enemies from gallows.

“I’ve said we need to build more gallows. If we try some of these high-level criminals, convict them and use a newly built set of gallows, it’ll make an example of these traitors who have betrayed our country,” Sen. Wendy Rogers, R-Flagstaff, said Feb. 25 in her speech to the white nationalist America First Political Action Conference in Florida.

Rogers told the white nationalists who were assembled in the ballroom at the Orlando World Center Marriott that they were “patriots.”

“I truly respect Nick because he’s the most persecuted man in America,” she said to loud cheers, adding later that he was “standing up to tyranny” by creating AFPAC.

Fuentes, an advocate of turning America into a nation only for white Christians, is one of the leaders of the so-called “groyper” movement — along with the founder of American Identity Movement, a white nationalist group formerly known as Identity Ervopa — and Rogers is one of its emerging icons. The groyper movement is a collection of white nationalists who seek to normalize racism and make it a part of mainstream conservative political ideology.

AFPAC opened with Fuentes soliciting a round of applause from the crowd for Russia’s invasion of Ukraine. The white nationalists chanted in response, “Putin! Putin! Putin!”

In his closing speech, Fuentes said “the United States is the evil empire in the world.”

“Now, they’re going and saying, “‘Vladimir Putin is Adolf Hitler,’ as if that isn’t a good thing,” he said, before chuckling a rehearsed nervous laugh and adding, “Oops, I shouldn’t have said that.”

Rogers lamented that there was no longer freedom of speech, and said “we can’t even laugh at comedy any more” for fear of being banned from social media platforms. (The First Amendment protects people from being punished by the government for their speech, but it does not apply to businesses or exempt people from facing consequences for their speech.) She pined for the 1980s and 1990s, when “we could say the craziest stuff and people would just laugh and not take offense, because it was simply light-hearted.”

“Now, they deplatform and debank people like Nick Fuentes, and even President (Donald) Trump,” she said. “This is like the USSR, but worse.”

The crowd at AFPAC included prominent members of America’s white nationalist movement, among them Jared Taylor and Peter Brimelow. Taylor garnered a following as the editor of a now-defunct pseudo-academic magazine that published pieces from open racists, and he hosts an annual conference that the Southern Poverty Law Center describes as a place “where racist intellectuals rub shoulders with Klansmen, neo-Nazis and other white supremacists.” Brimelow publishes a popular white nationalist website and has said “the U.S. is a white nation.”

One speaker at the event was Vincent James Foxx, a stalwart white nationalist who said he wanted to “criminalize” LGBTQ Americans and warned of the “Great Replacement.” That idea, popular among white supremacists, holds that white Americans are being replaced by non-white immigrants.

It has also inspired violence. Fears of immigrants undermining his vision of a white Christian Europe motivated Anders Behring Breivik’s murderous rampage in 2011 at a Norwegian youth summer camp. In the U.S., the Tree of Life synagogue shooting in Pittsburgh in 2018 was the deadliest attack against the Jewish community in United States history. Just before it took place, the killer took to right-wing social media site Gab to say he believed that immigrants were being brought in to replace and “kill our people.” The next year in New Zealand, 51 people would be killed and 40 injured but not before the shooter would post a 74-page manifesto titled “The Great Replacement.”

After Foxx spoke, Rogers gushed over him on Telegram: “Vincent James run for office.”

Later in the evening, former Maricopa County Sheriff Joe Arpaio gave a rambling, 40-minute speech in which he seemingly didn’t realize he was speaking to a crowd of white nationalists. At times, he seemed taken aback at the reaction to things he said.

“I have the reputation of being the biggest racist in the country,” he said, to robust applause. “What are you clapping for, that I am or that I’m not? Well, I’m not.”

Later, when he repeated that he was called “the biggest racist in the country” and received loud applause, he quickly added, “I have a black grandkid, I got a Mexican grandkid,” prompting some in the crowd to boo him.

At another point, Arpaio boasted about having a howitzer artillery gun while sheriff.

“Everyone said, ‘What are you using this for?’ I said, ‘To shoot people that come across the border,’” he said, eliciting raucous cheers from the crowd that left Arpaio visibly surprised.

“Wait a minute. I didn’t mean to shoot the illegals coming across. I’m saying the illegals that are terrorists and other violent (criminals), if they’re going to start shooting at my people, I’m going to fire back,” he explained, to much fewer cheers.

“I’m not about to shoot illegals who are coming across, just for coming illegally,” he finished, to no cheers.

Arizona Congressman Paul Gosar, a Republican from Prescott, gave a brief video address, a far cry from last year, when he was the featured speaker.

“You’re not a victim @WendyRogersAZ so quit pretending to be one. And stop using Christianity to justify race superiority and executing your political opponents,” he wrote on Twitter.

***UPDATED: This story has been updated to include comments from Sen. Paul Boyer and to add context to Nick Fuentes’ remarks about Adolf Hitler.