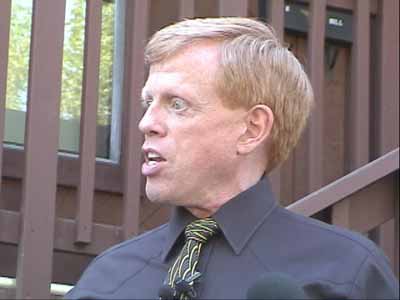 COEUR d’ALENE — Several more charges were filed against Edgar Steele, the former attorney for the Aryan Nations accused of plotting to kill his wife, Cyndi Steele, and her mother.Steele, 64, is tentatively scheduled to appear on Wednesday on three charges added on Tuesday by federal prosecutors.

On top of the original charge of use of interstate commerce facilities in the commission of murder for hire, new charges of use of explosive material to commit a federal felony, possession of a destructive device in relation to a crime of violence and tampering with a victim.

The tampering charge stems from Steele’s alleged attempt in taped conversations to influence witnesses. The charge says he “did knowingly attempt to intimidate and corruptly persuade C.K.S. to engage in misleading conduct … with the intent to hinder and prevent that information from being to a law enforcement officer …”The possession charge could lead to a sentence of less than 30 years plus a $250,000 fine upon conviction, while the maximum sentence for the tampering charge is 20 years and $250,000. The original charge and the explosives charge carry maximum 10-year/$250,000 penalties.

Steele is being held without bond in the Spokane County Jail as a result of a June 11 raid of his home near Sagle. He entered a not guilty plea on June 15. The FBI contends Steele plotted with Sagle resident Larry Fairfax to affix pipe bombs to the victims’ vehicles.

Fairfax went to the FBI and secretly recorded Steele talking about the plot. Fairfax, 49, was arrested on the day Steele was originally charged after auto shop workers in Coeur d’Alene found a pipe bomb under Cynthia Steele’s car. The FBI contended Fairfax put it there but never told investigators.

Federal defender Roger Peven, Steele’s attorney, who on July 12 filed for a temporary injunction to prevent the search of Steele’s computers, could not be reached for comment.

The Associated Press contributed to this report.