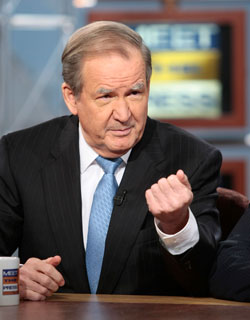 After a spokesman for the Obama campaign observed quite accurately that many American Jews consider Patrick Buchanan, the former right-wing Republican presidential candidate and aide to Presidents Nixon and Reagan, to be a Nazi sympathizer, Buchanan’s friends on MSNBC’s Morning Joe show, where he is a frequent guest, rallied to their friend’s defense. Not once, however, did Morning Joe host Joe Scarborough, co-host Mika Brzezinski, or columnist Mike Barnicle ever question Buchanan about any of the many anti-Semitic comments he has made over the years, or about his extensive record of defending Nazi war criminals and making disparaging comments about Holocaust survivors.

The subject came up in the first place because Alaska Governor Sarah Palin wore a Buchanan campaign button in 1999 when he visited Wasilla, Alaska where she served as mayor. Buchanan himself said on Chris Matthews’ Hardball that she and her husband had been among his “brigaders.” While it is disconcerting that John McCain does not consider a repudiation of everything Buchanan stands for to be an essential quality in a running mate, I am even more disturbed by the fact that Buchanan’s media colleagues, who usually hold their interviewees’ feet to the fire, gave their friend a free pass.

Buchanan is bright, erudite, personable, and a first-rate political analyst. He is also a reactionary who has publicly expressed blatantly anti-Semitic sentiments again and again. No less a conservative icon than the late William F. Buckley wrote in his book, In Search of anti-Semitism, that “I find it impossible to defend Pat Buchanan against the charge that what he did and said during the period under examination, the military build-up for the Gulf War, amounted to anti-Semitism.”

In 1941, Charles Lindbergh, one of the most prominent of the pro-Fascist America-Firsters of that era who desperately tried to keep the United States out of World War II, charged that “the three most important groups who have been pressing the country toward war are the British, the Jewish and the Roosevelt Administration.” After the 1990 Iraqi invasion of Kuwait, Buchanan said on national television that, “There are only two groups that are beating the drums right now for war in the Middle East, and that is the Israeli defense ministry and its amen corner in the United States.” 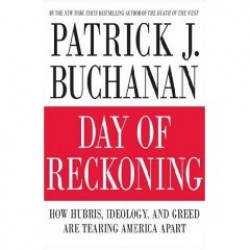 Shortly thereafter, Buchanan, who at times has referred to Capitol Hill as “Israeli-occupied territory” and called Israel “a strategic albatross draped around the neck of the United States,” singled out then New York Times Executive Editor A.M. Rosenthal, former Assistant Secretary of Defense Richard Perle, columnist Charles Krauthammer, and former Secretary of State Henry Kissinger the promoters of a U.S.-Iraq war. One does not need to be an ethnographer to figure out that Rosenthal, Perle, Krauthammer and Kissinger are all Jews, and that Buchanan deliberately did not mention any of the many non-Jewish supporters of Operation Desert Storm. And Buchanan made absolutely clear what he meant by subsequently writing in one of his columns that the Americans who would die in such a war were “kids with names like McAllister, Murphy, Gonzalez and Leroy Brown.”

In a September 1993 speech to the Christian Coalition, Buchanan said that, “Our culture is superior. Our culture is superior because our religion is Christianity and that is the truth that makes men free.” When John Cardinal O’Connor deplored Catholic anti-Semitism, Buchanan declared, “If U.S. Jewry takes the clucking appeasement of the Catholic cardinalate as indicative of our submission, it is mistaken. When Cardinal O’Connor of New York seeks to soothe the always irate Elie Wiesel by reassuring him ‘there are many Catholics who are anti-Semitic’…he speaks for himself. Be not afraid, Your Eminence; just step aside, there are bishops and priests ready to assume the role of defender of the faith.”

Which brings us to whether Buchanan is a Nazi sympathizer. He certainly has engaged in the constitutionally protected perversion of championing the cause of a succession of Nazi war criminals, from John Demjanjuk to Karl Linnas to Arthur Rudolph. Buchanan has also called for the abolishment of the Justice Department’s Office of Special Investigations, which prosecutes and seeks to deport Nazi war criminals from the United States, because he considered the unit to be “a shark force . . . running down 70-year-old camp guards.”

In the Spring of 1985, when Holocaust survivor Elie Wiesel, then Chairman of the U.S. Holocaust Memorial Council, urged President Reagan not to go to the Bitburg military cemetery in Germany where members of Hitler’s notorious Waffen-SS lie buried, Buchanan, then a White House aide, was one of the most ardent proponents of the trip who, according to fellow White House staffer Ed Rollins, kept writing the phrase “succumbing to the pressure of the Jews” on his notepad during a meeting with Wiesel.

Though Hitler was indeed racist and anti-Semitic to the core, a man who without compunction could commit murder and genocide, he was also an individual of great courage, a soldier’s soldier . . . a political organizer of the first rank, a leader steeped in the history of Europe, who possessed oratorical powers that could awe even those who despised him.

Buchanan has also argued that it would have been impossible for hundreds of thousands of Jews to perish in the gas chambers of the Treblinka death camp, a perverse obscenity regularly disseminated by Holocaust deniers. And he has referred to a “so-called Holocaust Survivor syndrome” which he described as involving “group fantasies of martyrdom and heroics.”

Patrick Buchanan walks like a Nazi sympathizer and quacks like a Nazi sympathizer. Over the course of his long career he has defended a host of Nazi war criminals, made numerous anti-Semitic slurs, and disparaged Holocaust survivors. If anything, therefore, Obama campaign spokesman Mark Bubriski engaged in colossal understatement when he accurately observed that “many Jews call” Buchanan “a Nazi sympathizer.” The more relevant issue is why Buchanan’s media colleagues don’t denounce his ugly rhetoric and instead consistently legitimize him by failing to confront him with his own record and past statements.

Menachem Rosensaft is a lawyer in New York City, and the Founding Chairman of the International Network of Children of Jewish Holocaust Survivors

Previous Article
Time Machine: After They Murdered JF Kennedy – “The Stench of Fascism” at the 1964 Republican Convention
Next Article
The “Manchurian” Candidate Cover Story for American Mind Control Experimentation: U.S. POWs During the Korean War