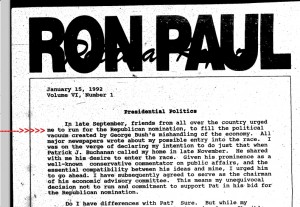 A few associates of Ron Paul say the Texas congressman signed off on racist newsletters produced in the 1990s under his name.

The Washington Post reports that Paul, a presidential hopeful, was "deeply involved" in the company that produced the newsletters, signing off on articles and speaking frequently to staff members, according to sources close to Paul's operation.

"It was his newsletter, and it was under his name, so he always got to see the final product. . . . He would proof it,'' Renae Hathway, a former secretary in Paul's company, told the Post.

The newsletter's articles, which included racial, anti-Semitic and anti-gay content, have dogged Paul at various points in the last two decades. In the past, Paul took some responsibility for the newsletters because they appeared under his name.

But in recent years, the congressman has distanced himself from the content. A Paul campaign spokesman told the Post that the new accounts of Paul's involvement were not true.

Paul "abhors it, rejects it and has taken responsibility for it as he should have better policed the work being done under his masthead," Jesse Benton, the campaign spokesman, told the Post.

Click here to read the rest of the story.