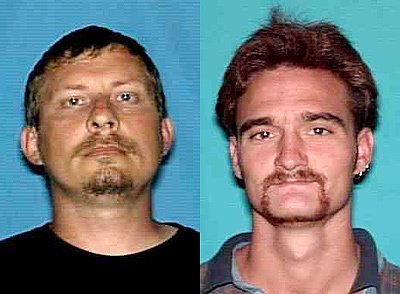 Guy Evan Graves, 35, left, and Johnny Preston Reed, 37, are wanted in connection with the fatal shooting of a 24-year-old Weatherford man.

FORT WORTH -- Police have located a truck sought in connection with the fatal shooting of a 24-year-old Weatherford man this week by a man believed to be a member of the Aryan Brotherhood.

The truck, a 1995 Chevrolet extended cab, was found abandoned on West Lake Drive in Weatherford, according to a statement from the Weatherford Police Department.

A 37-year-old man alleged to be a member of the Aryan Brotherhood and wanted in connection with the fatal shooting was arrested early this morning in Kaufman County, officials said.

Authorities are still searching for 35-year-old Guy Evan Graves, also a suspected member of the Aryan Brotherhood. Police had said they believed Graves might have been driving the pickup found today in Weatherford.

The men are accused of murder in connection with the death of Jeremy Ryan Sisk, 24. Officers responding to a shooting in the 200 block of West Bridge Street about 11:34 a.m. Tuesday found Sisk dead with a single gunshot wound to the face.

Anyone with information about Graves' whereabouts is asked to call Weatherford police at 817-598-4300.