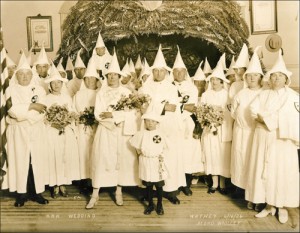 (NATIONAL) -- The Kansas City based human rights organization Institute for Research & Education on Human Rights that recently produced a research paper exposing certain Tea Party members and groups for what it claims are their connections to “racially charged” White Nationalist groups, plans to “out” a Tea Party member with ties to such groups every Wednesday.

This week’s posting by IREHR (at www.teapartynationalism.com) claims Peter Gemma - a Tea Partier from Sarasota, Florida who is signed up to the “ResistNet” Tea Party faction - is also a professional white nationalist who has worked for openly white nationalist groups such as the Council of Conservative Citizens and the National Policy Institute and has spoken at Holocaust Denial gatherings and once shared a stage with David Duke.

The IREHR posting claims Gemma was a featured speaker at a meeting of the Holocaust Denial group, the Institute for Historical Review, in 2004.

The report says all of the Council of Conservative Citizen core issues are “racially charged” such as: official recognition of Confederate battle flags, preserving monuments to the Confederacy, attacks against affirmative action and non-white immigration.

In writing about immigration, the Citizens Informer has complained, says the IREHR report, that non-white immigrants were turning the U.S. population into a "slimy brown mass of glop" - an act likened to "genocide."

Thanks for providing the information.