Wolfram Aïchele: Portrait of the Artist Under the Reich (Book Review) - The Constantine Report
0 SHARES

Book Reviews » Wolfram Aïchele: Portrait of the Artist Under the Reich (Book Review)

WHEN WE THINK about victims of Hitler’s regime in Germany we often overlook ordinary German people, many of whom were never enthusiastic supporters of Nazism. German men of a certain age, as diverse as Günter Grass (drafted into the Waffen SS) and Pope Benedict XVI (a member of Hitler Youth) – participated in Nazi organisations, but this says more about the time than the individual.

In 1936 the Führer declared Hitler Youth an official educational institution in which all German boys must participate. Another unwilling recruit was Wolfram Aïchele, aged nine in 1933, who would much rather have spent his time cycling around the Swabian countryside, visiting medieval churches and re-creating their Gothic artwork than marching and flag-waving in Hitler Youth.

This book is a remarkable narrative of Aïchele’s life during the Nazi regime, written by his son-in-law Giles Milton, drawing on a range of sources, including 60 hours of interviews with Aïchele, family papers and accounts by surviving family and friends.

Aïchele had an unconventional upbringing in the family villa at Eutingen, near the town of Pforzheim, in the Black Forest. His father, Erwin, was a distinguished animal artist and his mother, Marie Charlotte, an independent spirit who encouraged her son’s talent.

The account depicts the impact of the Nazi regime on the town and the family: attacks on Pforzheim’s Jewish inhabitants; the closure of the local freemasonry lodge (of which Erwin had been a member); the banning of Rudolf Steiner’s anthroposophical movement (to which Marie Charlotte had belonged); the book burning in the town centre, horrifying to a family that valued literature. As Milton explains: “Theirs was the Germany of Goethe and Schumann, Heine and Bach.” 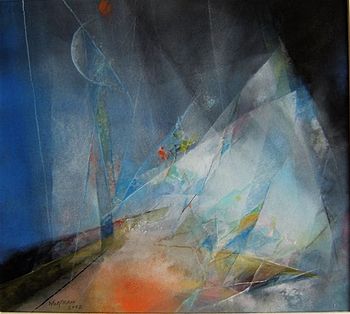 The speed with which Nazism dominated the town emerges clearly. And as the regime intruded into their lives the Aïchele family, like many others, learned to be circumspect in expressing their anti-Nazi views.

At 17 Aïchele was able to pursue his cherished ambition to study at the Bavarian state wood-carving school at Oberammergau. To his dismay, only months after commencing his training he was called up to serve in the Reich Labour Service and in June 1942 sent to support the German army in Crimea.

He loathed the army and the brutality he witnessed in travelling through Nazi-occupied Ukraine, writing home that he would “rather be anywhere [else] in the world”. However, like most Germans at the time, he remained unaware of the nature and extent of Nazi crimes until after the war.

Constantly hungry and thirsty, he fell seriously ill with diphtheria, from which it took nine months to recover. In fact this was to save his life, removing him from the Sixth Army before its defeat in Stalingrad, in which most of his conscripted comrades died. When he had recovered sufficiently he was trained as a wireless operator and posted to Normandy, just in time for the D-Day invasion. Trapped inside an American beach head and subjected to bombardment in which many around him were mown down, he surrendered with relief to the American forces and spent the next two years in prisoner-of-war camps in Britain and the United States.

The book explores the experiences of Aïchele’s family during the war, beset by increasing food, fuel and other shortages and worry about the fate of those at the front.

While Aïchele was imprisoned Pforzheim was largely destroyed. The town had long been a centre of watchmaking and jewellery manufacture, and the Allies were convinced that it was a centre of precision weapons. On February 23rd, 1945, 10 days after the bombing of Dresden, the town was firebombed, with more than 80 per cent of the town centre destroyed and about a quarter of the inhabitants killed. Fortunately for the Aïchele family, their location outside the town meant that they escaped the bombardment, although many of their friends and acquaintances perished.

Aïchele was free to return to Germany in June 1946, and the following autumn he recommenced his studies in Oberammergau, where he completed his sculpture course with distinction and went on to study fine art in Stuttgart. Now 86 and living in Paris, he is an internationally acclaimed artist. Indeed, his website, which shows some of his recent watercolours and collages, is well worth a visit.

Giles Milton, married to Wolfram’s daughter Alexandra, is a writer and historian who has specialised in 16th- and 17th-century histories, of which the best known is Nathaniel’s Nutmeg (1999), an account of the trade struggle between the English and Dutch in the early 17th century. Here he has woven a compelling account of Aïchele’s experiences, setting them unobtrusively in their historical context. Photographs of family, places and events intensify the vividness of the account.

Aïchele survived the war and suffered little relative to many of his contemporaries. He was not particularly heroic or a figure of resistance. His story, as Milton points out, is “simply an account of how an idiosyncratic young artist, whose only desire was to sculpt and paint, became trapped in a nightmare not of his making”. Nevertheless, in seeking to comprehend this dark period we should not lose sight of those simply trying to live their lives, who became caught up unwillingly in Hitler’s Reich.

Remember Amy Winehouse. Watch out for that burnout, that it doesn’t overwhelm you. . .

Stay alive if you can; survive to live on and hopefully recover some scraps of yourself afterwords. Remember you are an irreplaceable bearer of hidden histories.