Investigation Opened into the Nazi Murderers of Einstein’s Family

Two versions of the story here from the Jewish press:

Wife and two daughters of Jewish physicist's cousin were murdered by Nazis in Italy in 1944. Einstein family now offering €5,000 reward for information about murder 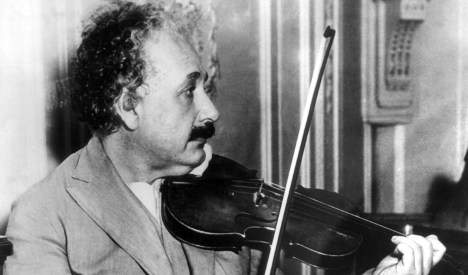 The family of Jewish physicist Albert Einstein is offering a €5,000 ($6,850) reward for information about the murder of three members of Einstein’s family by Nazi soldiers in 1944. The wife and two daughters of Eisntein's cousin Robert were murdered in August 3, 1944 near Florence, Italy.

Authorities have been investigating the murder since 2007 when new evidence surfaced, and have largely managed to reconstruct the events of the day of the murder.

The investigation revealed that a group of German soldiers stormed the house in early August 1944. Robert Einstein was not to be found, but his wife and daughters, aged 18 and 27, were seized. They were accused of spying and then murdered.

According to investigators, one young soldier from the group distanced himself from his comrades and went to a separate part of the house. Police are searching for him in the hopes he is still alive and can reveal the identity of the officers in charge for the murder.

War crimes prosecutors in Stuttgart are offering a cash reward and will go live on television next week in order to try and find an unknown former German army soldier who witnessed the the unjust killings of Albert Einstein’s relatives in Italy. But, isn’t it too late? “its all relative” if you ask the prosecutors. ...

On August 3, 1944, in the midst of the Second World War, a group of soldiers, of whom none have been identified, went to the home of Roberto Einstein (because of his name) who lived near Florence. They where there looking for Jews and moreover, they did in fact know that he was a relative of the genius Nobel prize winner, Albert Einstein.

They could not find Roberto, who found a hiding place near the house, but they did find Roberto’s wife and two daughters (18 and 27 year olds) who were accused of espionage and executed at the site.

In 2007, due to new evidence concerning the incident, the police started looking into it again. They have established that one soldier present at the scene did not want to be a part of the murder and went into a different room inside the house. They believe the soldier which was 18 to 20 years-old at the time, is the key to solving the crime because he knows who the killers were and can name his commanding officer as well.

The war crimes unit said they have largely reconstructed the crime. They now hope that the soldier, who is now being sought as a witness is still alive and will approach them or be located with the help of the public.

As for Roberto Einstein, he committed suicide one year later in 1945 as a result of the pain and agony. Albert Einstein lived in the US during the time of the war.