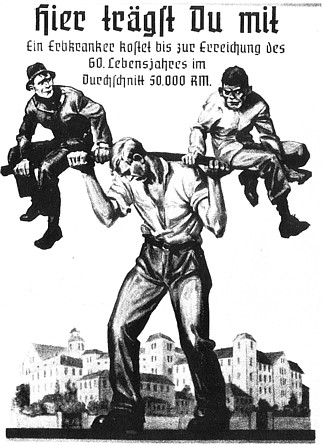 “She just digs and digs and digs for her sources,” Ms. Foor said, noting that Calla had searched fruitlessly for a surviving Hitler Youth alumnus to interview. … “

Here is a Hitler Youth leader for you to interview, Calla. Contact the reporter at the Daily Breeze, give that ol’ Nazi a call and nail that interview. Good luck in Maryland. – Alex C.

DELTA – One of the darkest episodes of human history is the subject of a 10-minute, solo play that a Delta eighth grader will present in National History Day competition in Maryland next month. Calla Gilson’s presentation, which won her one of two “national finalist” entries from state competition last month in Columbus, focuses on the Nazi propaganda machine before and during World War II that persuaded a large number of Germans to believe in master and inferior races. “I find it very intriguing how a group could create so many lies for so many followers and cause so much devastation,” Calla said last week. Her goal is that humanity will continue to learn from that history, “so it doesn’t happen again.” In her presentation, Calla portrays both a Hitler Youth member and a Jewish girl. To develop the characters, she read biographies written by former Hitler Youth participants as well as those of Holocaust survivors. She also interviewed, for 45 minutes, the curator of a museum exhibit on Nazi propaganda that focused on the use of cinema and radio. The plan for indoctrination through propaganda is clearly laid out in Adolf Hitler’s book, Mein Kampf, she said, and history showed how closely that plan would be followed by the Nazi chancellor and his cabinet. “I really enjoy the research part of this,” Calla said. Jane Foor, Delta Middle School’s talented-and-gifted specialist, said research is 60 percent of the score for State History Day presentations, and has been a strong component of Calla’s efforts since her first entry as a sixth grader two years ago. Calla received honorable mention in state competition that year and last year. “She just digs and digs and digs for her sources,” Ms. Foor said, noting that Calla had searched fruitlessly for a surviving Hitler Youth alumnus to interview. Calla’s seventh-grade History Day project covered Dust Bowl/Great Depression photographer Dorothea Lange, while her sixth-grade project also used the Nazi era in Germany for subject matter: “Triumph and Tragedy” highlighted the Kinder Transport campaign to spirit 10,000 Jewish children out of Germany as the Nazis’ anti-Jewish pogrom intensified. “It’s my favorite period of history” to study, Calla explained. This year’s national competition will be June 13-16 at the University of Maryland in College Park. “It really is quite an accomplishment to get to that level and compete nationally,” said Kim Schuette, a spokesman for the Ohio Historical Society, which manages the state competition. Mary Bezbatchenko, the historical society’s State Coordinator for National History Day, said that 500,000 students annually enter district-level competition in five categories, including papers, documentary film, Web site creation, exhibits, and stage performance. Several categories subdivide into individual and group presentations. There are separate “junior” and “senior” age groups representing junior high/middle school and high school entries. Keely Edwards, also a Delta Middle School student, is a national alternate this year in the individual exhibit competition for a project about the influenza epidemic of 1918 and its impact on medicine. Last year, Emily Thomas, another Delta Middle School eighth grader, represented Ohio in the individual performance category.