How Rudolph Hess was Persuaded to Reveal Nazi Secrets 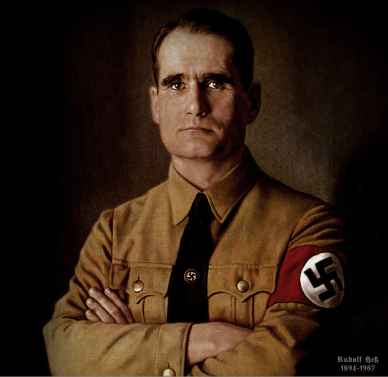 Rudolf Hess, sunken-eyed deputy to Adolf Hitler, was perhaps the most enigmatic figure to emerge from the Second World War. He was a prisoner from the moment he parachuted into a Scottish field in May 1941 but for more than four decades disclosed almost nothing about his strange flight from the Third Reich.

Now the veteran Australian reporter Desmond Zwar has revealed how he helped to extract information from the Nazi while he was locked up alone in Spandau prison, West Berlin. Although the huge, red-brick, 19th-century jail was under the strict control of the Allies — the US, Britain, France and the Soviet Union — Mr Zwar managed to conduct a bizarre conversation stretching over several years with Hess.

It was a remarkable achievement: Hess was barely talking even to his own family and seemed unwilling or unable to talk about the past. He had claimed amnesia during the Nuremberg trials and had remained silent since being jailed in Spandau in 1947. Yet he held the key to some of the great riddles of the war.

Had he been sent by Hitler to negotiate a separate peace with Britain, a common front against the coming war with the Soviet Union? How much did he know about Hitler’s intention to invade Russia? Was the point of his solo flight to Scotland to oust Winston Churchill and bring a “peace faction” to power? Or was Hess putting himself forward as a future alternative to Hitler? Was he insane?

“I wrote out the questions for Hess, gave them to the US prison commandant Eugene Bird,” Mr Zwar says. “Bird would record Hess’s answers, I would have the tapes transcribed and translated, write them up and send the text back to him via Colonel Bird. Hess would then hide the paper in his underwear and read them in the prison garden.”

The resulting manuscript became a book under the name of Colonel Bird and it unleashed a furious response from the Western allies and from Moscow. Mr Zwar’s role in writing the book was quickly evident and US agents were sent to his house in Australia. Special Branch was dispatched to his London agent, George Greenfield. Colonel Bird was suspended. A recently declassified exchange between Washington and the US Embassy in Berlin, obtained by Mr Zwar, has a senior official warning in 1972 that the manuscript “could be embarrassing if the contents were subjected to unsympathetic public scrutiny”.

Embarrassing, above all, because it would enrage the Russians. Although the Western allies were convinced that Hess should be freed after 25 or 30 years, Moscow insisted on his staying put until his death — Spandau was Russia’s only major foothold in West Berlin — and refused to ease his living conditions. Hess was not allowed to lie down on his bunk during the day or touch his wife during her 30-minute monthly visits. In Talking to Rudolf Hess, to be published this month, Mr Zwar, 78 — who worked for the Melbourne Herald Sun — describes how he had to train Colonel Bird to be his eyes and ears in the jail. Mr Zwar, 78, would sit outside in the colonel’s Mercedes waiting to record his observations.

Hess was eventually persuaded to admit that he had been part of the planning team for the invasion of the Soviet Union. This is what had convinced him to try at the last moment to seek an alliance with Britain against Bolshevism.

“I knew that there was only one way out — and that was certainly not to fight against England,” Hess said into the tape recorder. “Even though I did not get permission from the Führer to fly I knew that what I had to say would have had his approval. Hitler had great respect for the English people ... little did I know that Churchill did not have the power to stop the rolling stone. I went too late.”

If the peace overture had been successful, he mused, “would I have got the Nobel Prize, like Willy Brandt, instead of now being in prison?”

The reporter set out to find the psychiatrists who had questioned Hess. In London, in 1967, he tracked down the consultant J.R. Rees, who had 35 sessions with Hess. His report to the Government concluded that Hess was a “psychopathic personality of the schizophrenic type”. Dr Rees told Mr Zwar that Churchill ordered the reference to schizophrenia to be dropped. “If anybody was schizophrenic they could have been repatriable under the rules of war,” Dr Rees said.

Hess’s mysterious death in 1987 fed the myths. “It must have been murder,” Mr Zwar says. According to the official version, Hess, 93, blind in one eye and unable to feed himself, hid from the sentries in the prison towers, wrapped an electric flex around his neck and hanged himself. “He could not even raise his arms above shoulder level,” Mr Zwar says. “To hang yourself you have to be able to do that.”

Dr Walther Funk Nazi Germany’s Minister for Economic Affairs from 1937 to 1945. Sentenced to life imprisonment at Nuremberg but released because of ill health in 1957

Admiral Erich Raeder Head of the German Navy before resigning in 1943. Jailed; released in 1955

Albert Speer Minister for Armaments and Hitler’s favourite architect. Served a 20-year term and was released in 1966

Baldur von Schirach Head of the Hitler Youth and governor of Vienna. Sentenced to 20 years and released in 1966. Published his autobiography I Believed in Hitler. Died in 1974