" ... Beginning in the 1980s, when Cardenal Ratzinger took up the strategic post of guardian of orthodoxy and discipline, he continued the practice of covering-up, evading, hiding, transferring, and thus giving priority to the avoidance of scandal rather than the suffering of the victims and the punishment of pervert priests. ... ” 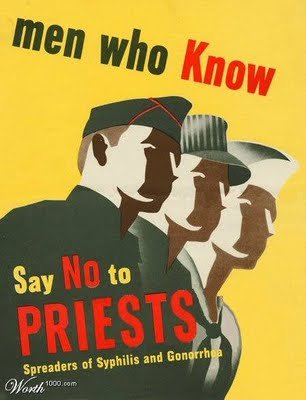 The Vatican has rejected fresh allegations linking Pope Benedict XVI to a cover-up of paedophile priests, even as international media reports accused the Church of moral bankruptcy and questioned the pontiff’s authority to continue to lead it.

The New York Times has alleged that the Pope, when Cardinal Joseph Ratzinger, failed to defrock an American priest, the Rev Lawrence Murphy, for the abuse of 200 pupils in a school for deaf boys in Milwaukee. The allegations were the latest in a series of scandals to hit the Church this year.

L’Osservatore Romano, the Vatican newspaper, said in an editorial that Pope Benedict had always handled such cases with “transparency, purpose and severity.” It accused the international media of acting “with the clear and ignoble intent of trying to strike Benedict and his closest collaborators at any cost”. One of the Pope’s top aides, Cardinal José Saraiva Martins, said there was “a conspiracy” against the Church.

But piling on the media pressure, Der Spiegel magazine, which has investigated abuse cases involving priests in Germany, asks in an article titled “The Fallibility of the Infallible Pope”:

“When is it time for a pope to resign? Margaret Kässmann, the former head of the Protestant Church in Germany, stepped down in February upon deciding that she no longer had the necessary moral authority for her office after being caught driving drunk. But how much authority does Pope Benedict XVI still enjoy?”

The article by Peter Wensierski in Der Spiegel’s English-language website,  sharply criticises the Vatican’s response for not going further than “than the kind of crisis management one might see at a medium-sized company: issuing an apology, setting up a round table discussion to deal with the problem, establishing a hotline – and not much more…

“So how are the perpetrators behind the perpetrators to be found? How are we supposed to eradicate the system of cover-ups, silence and reassigning paedophiles to other diocese in the Church?,” he wrote. “And who will force the Church to open its files to the public?”

The media in two countries with deep Catholic roots also questioned the Vatican’s methods in handling the scandal.

In Spain, where the New York Times article made splash headlines, El País newspaper was scathing in its condemnation of the Vatican response. In an article by Juan Bedoya, it said: “In any organisation this wave of scandals would be seen as moral bankruptcy. The Catholic Church is different. It always finds other reasons that have little to do with the central issue.

“We have read in recent days about the abuse cases in Germany. One priest has even resorted to mathematics: of the 210,000 cases of abuse reported in that country since 1995, only 94 concern Catholic Church personnel. As the resulting percentage is 0.044, the hierarchy comes up with a disgusting excuse: [it is the fault of] the ‘anticlerical communications media’.

“Behind this kind of justification is the idea that the Christian [sic] Church continues to be a Perfect Society — that is how it was defined by the Spanish Official State Bulletin in 1953 — which is above the law and punishments of this Earth. Its hierarchy is thus subject to a higher law, or at least Ecclesiastical Law. In that context, sexual abuse is only a sin, not a crime. It suffices to confess and repent, and leave it all behind.”

In Argentina, the mass circulation El Clarín’s Julio Algañaraz wrote that the Pope’s “annus horribilis continues and is worsening. It began in 2009 when [the Pope] had the bad judgment to lift the excommunication of four Lefebvre bishops – among them the Englishman Richard Williamson, who has denied the existence of the Nazi gas chambers and the Holocaust – which provoked an explosion of rebellions in European episcopates. Instead of subsiding, the crisis has acquired a new dimension. Just like Pandora’s Box, the succession of sexual abuse cases involving priests continues to blossom with devastating effect, and comprises thousands of cases in the United States, Ireland, Germany, Austria and now Italy as well, where the weekly L’Espresso has reported the existence of over 40 cases that are currently under investigation. The impression we have is that there will be more cases in these and other countries…”

Algañaraz added that before becoming Pope, Cardinal Ratzinger had promised to clean up the Church. “Many of us didn’t know what he was referring to. Now it has become clear: the soon to be Benedict XVI knew that his destiny was to be pontiff and the issue of sexual abuse was a tragedy which threatened to engulf the Church and himself.

“It was necessary to open Pandora’s Box, but the Pope has avoided admitting his own guilt and that of the Vatican. Beginning in the 1980s, when Cardenal Ratzinger took up the strategic post of guardian of orthodoxy and discipline, he continued the practice of covering-up, evading, hiding, transferring, and thus giving priority to the avoidance of scandal rather than the suffering of the victims and the punishment of pervert priests.”