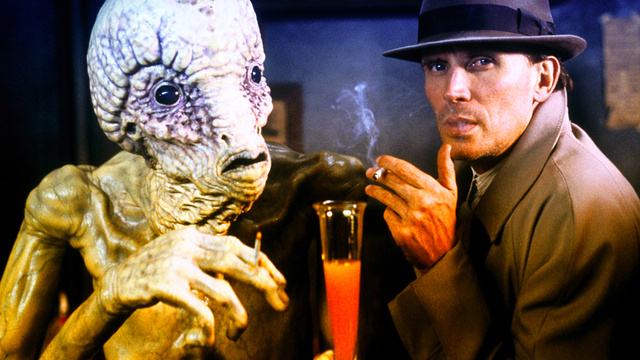 In 1959, the same year Olympia Press published his most famous novel Naked Lunch, the writer William S. Burroughs visited the restaurant of his friend and collaborator, Brion Gysin, in Tangiers. There, Burroughs met John and Mary Cooke, a wealthy American hippie couple who were interested in mysticism. Burroughs recalled, "There was something portentous about it, as though I was seeing them in another medium, like they were sitting there as holograms."

Who were these portentous holograms? Scientologists. Indeed, John Cooke is reported to have been the very first person to receive a status of "Clear" within Scientology, and was deeply involved in its founding. Cooke had been trying to recruit Gysin into the Church, declaring that the artist was a natural "Clear" and "Operating Thetan." Ultimately, it was Burroughs, not Gysin, who explored the Church that L. Ron Hubbard built. Burroughs took Scientology so seriously that he became a "Clear" and almost became an "Operating Thetan."

On a research trip to the New York Public Library, I discovered that Burroughs had left behind a rich paper trail documenting his exploration of the science-fiction inspired Church.

I was looking into Burroughs' life as part of a bigger project about his influence on punk, which led me to the the Henry W. and Albert A. Berg Collection at the NYPL. The William S. Burroughs Papers have a range of amazing materials related to Burroughs's exploration of Scientology, including extensive handwritten notes Burroughs took on Scientological training materials, notes from auditing sessions Burroughs conducted, and even a cut-up of auditing questions. 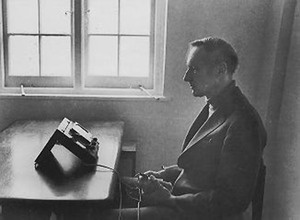 According to his biographer, Barry Miles, Burroughs very quickly incorporated Scientology into his worldview. In an October 27, 1959 letter to Allen Ginsberg, Burroughs wrote: "The method of directed recall is the method of Scientology. You will recall I wrote urging you to contact local chapter and find an auditor. They do the job without hypnosis or drugs, simply run the tape back and forth until the trauma is wiped off. It works. I have used the method—partially responsible for recent changes." Burroughs thought that the Church was teaching techniques that might help him resist social control by erasing negative images called "engrams" and its ideas came to inform his art.

Only two days later, Burroughs wrote again to Ginsberg: "I have a new method of writing and do not want to publish anything that has not been inspected and processed. I cannot explain this method to you until you have necessary training. So once again and most urgently (believe me there is not much time)—I tell you: 'Find a Scientology Auditor and have yourself run.'" Scientology appears throughout Burroughs's oeuvre, and especially in his innovative cut-up trilogy of the sixties and in the avant-garde films he made with Gysin.

Again and again in his writings and interviews, Burroughs mentions the E-meter as Scientology's most important contribution to a science of the mind. The E-meter, Burroughs thought, was "really a sort of sloppy form of electrical brain stimulation… a lie-detector and a mind-reading machine… Not the content, only the reactions." Elsewhere Burroughs described the E-meter as a "useful device for deconditioning," or the elimination of imposed or habitual reactions of symbols and figures. The goal is to achieve something like a "floating needle," a therapeutic method Burroughs claimed to sometimes use. In his book of interviews, The Job, Burroughs explained his view that Scientology could help counter "the Reactive Mind… an ancient instrument of control designed to stultify and limit the potential for action in a constructive or destructive direction." Burroughs associated the Reactive Mind with Mayan calendars, which he described in the same interview as "one of the most precise and hermetic control calendars ever… on this planet, a calendar that in effect controlled what the populace did thought and felt on any day."

Scientology appears again disguised as the "Logos" group in Burroughs's 1962 novel The Ticket That Exploded. As described in the book, Logos has "a system of therapy they call ‘clearing'. You ‘run' traumatic material which they call ‘engrams' until it loses emotional connotation through repetitions and is then refilled as neutral memory' When all the ‘engrams' have been run and deactivated the subject becomes a ‘clear.'" In the 1964 novel Nova Express, Scientology is for the first time openly described in Burroughs's fiction. During an interrogation scene in the book, an unnamed character declares "The Scientologists believe sir that words recorded during a period of unconsciousness… store pain and that this pain store can be lugged in with key words represented as an alternate mathematical formulae indicating umber of exposures to the key words and reaction index… they call these words recorded during unconsciousness engrams sir… The pain that overwhelms that person is basic basic sir and when basic basic is wiped off the tape… then that person becomes what they call clear sir." At the start of 1968, Burroughs deepened his relationship to the Church. He took an intense two-month Scientology Clearing Course at the world headquarters of Scientology in Saint Hill Manor in the UK and Burroughs was declared a "Clear," though he later claimed that he had to work hard to suppress or rationalize his persistently negative feelings toward L. Ron Hubbard during auditing sessions.

The Berg has almost a dozen files filled with Burroughs's pamphlets from Saint Hill as well as his almost unreadable hand-written notes on Scientology courses and questions he prepared for auditing sessions he himself conducted. These files include, as I've mentioned, an attempt to create a cut-up from auditing questions; from the start, Scientology was very much connected to the cut-up technique and Burroughs's theory that language constituted a kind of virus that had infested the human host. At Saint Hill, Burroughs entered an intense and obsessive period of auditing sessions with an E-Meter, including a process of exploring past lives, though he slowly began to grow alienated from the Church and what he considered its Orwellian security protocols. Burroughs's antipathy for Scientological "Sec Checks" are apparent in his strange and violent story, "Ali's Smile," which was published in the collection Ali's Smile/Naked Scientology. Burroughs eventually rejected Scientology—because of what he called "the fascist policies of Hubbard and his organization"—but cautiously endorsed some of its "discoveries." His break with the Church developed over course of the late sixties in the pages of the London-based magazine, Mayfair, where Burroughs wrote a series of increasingly hostile "bulletins" about his adventures with the organization. These bulletins culminated in Burroughs's amusingly titled Mayfair article, "I, William Burroughs, Challenge You, L. Ron Hubbard." This piece was republished in the Los Angeles Free Press. In his challenge to L. Ron, Burroughs wrote:

For his inquiries, Burroughs reports, he was expelled from the organization and in 1968 was put into what Scientologists call a condition of "Treason"; though the exact circumstances surrounding this incident remain unclear. Burroughs's public battle against the Church continued in a 1972 issue of Rolling Stone, where he expressed his support for Robert Kaufmann's exposé, Inside Scientology, published by Olympia Press. Here Burroughs uses his harshest language yet: "Scientology is a model control system, a state in fact with its own courts, police, rewards and penalties." Strangely enough, despite his break with the group, Scientology reappeared in the 1972 film Bill and Tony, which Burroughs made with Antony Balch (the masturbating guy in Towers Open Fire). In Bill and Tony, an image of Burroughs's disembodied floating head recites instructions for how to operate an auditing session.

So what are we supposed to make of all this? On one level it's hard to say, but what ought to be abundantly clear is that Burroughs took Scientology quite seriously indeed for the better part of a decade—during what was arguably his most artistically fertile period. Burroughs clearly had his own uses for Scientology. Gysin once quipped that Burroughs was probably the first person to make more money from Scientology than the organization made from him. This may be true, but Burroughs wasn't investigating the Church cynically. Today, where so much attention focuses on the science fictional origins of Scientology, it is easy to forget how seemingly in harmony the Church was with a whole range of countercultural, "New Age," and anti-psychiatric practices in the Sixties.

What becomes clear when you listen to Burroughs talking about Scientology is that he associated the group with a range of mind-expanding and mind-freeing practices: Wilhelm Reich's trippy Orgone Accumulator, which Jack Kerouac wrote about in On the Road; Mayan calendrical mind control systems; hallucinogens (especially the plant yagé) and other powerful mind-altering drugs; apomorphine, which he used several times to treat his drug addiction; the rambling, sarcastic monologues he called "routines"; the Dream Machine Burroughs invented with Gysin, a machine that supposedly could simulate "alpha-waves"; and of course his ultimate weapon in the Burroughs arsenal, the cut-up, which was designed to jam up what he called "the Reality Studio," aka the everyday, conditioned, mind-controlled reality. If you spend enough time digging through Burroughs's writing, you get the sense that Burroughs thought he lived in a very literally real science fictional world.

Absent from Burroughs's writing are any references to body thetans, Xenu, the Galactic Confederacy, Douglas DC-8 airliners, volcanic hydrogen bombs, or other beliefs more recently associated with Scientology, thanks to the South Park episode, "Trapped in the Closet" and Lawrence Wright's epically long New Yorker article on the defection of the film director Paul Haggis from the church). It's too bad Burroughs didn't achieve a higher OT level; he could have mined Scientology's madcap space opera as a source for even more mind-bending books.

Lee Konstantinou is author of the novel Pop Apocalypse, and begins a teaching fellowship in English at Princeton in the fall.