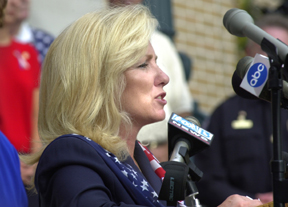 Susan Latvala is a Republican running for County Commissioner in Pinellas Country, Florida. Ms. Latvala is the former board chairman of Operation PAR, a CIA-linked drug addiction program heavily dependent on federal funding, a Drug Free America appendage ... yet she hypocritically berates Bob Hackworth, her Democratic opponent in the county commissioner contest, in disingenuous campaign flyers for supporting Obama's health care initiative (see attachment below)... Opreration PAR is the successor of Straight, Inc., shut down after it became public knowledge that children were treated brutally under the program, founded by Florida real estate magnate/shopping mall builder Mel Sembler, another prominent Republican with ties to gobs of far-right GOP and CIA scandals. I wrote about Ms. Latvala and Opertion PAR several years ago because they are joined at the hip with Mel and Betty Sembler, CIA mind control and Scientology:

" ... Op PAR receives a lot of its income from government grants, and from government Medicaid and Medicare payments. Last year it received a $4 million federal grant to build a development center and therapeutic community. In 1999 PAR was accredited by the Joint Commission on Accreditation of Healthcare Organizations. Today PAR can also be reimbursed by managed health care providers in addition to receiving its government grants. PAR even bought and operated a mental hospital which is ironic since Susan Latvala, chairman of the board at PAR, has been very chummy with the Church of Scientology™. Scientologists strongly oppose the profession of psychiatry, though many consider Scientology™’s Dianetic™ processing as a sort of poor man’s alternative to psychiatric counseling. PAR’s Dr. Betty Buchan even endorses Narconon™ the drug treatment regimen so closely aligned with Scientology™. ... "

PALM HARBOR — What do President Barack Obama and Pinellas County Commission candidate Bob Hackworth have in common? If you believe longtime Commissioner Susan Latvala: a lot. Campaign fliers mailed by Latvala this week tie her Democratic opponent to the embattled president, alleging Hackworth would bring Obama's "big government, liberal agenda to Pinellas" and riffing off an Obama slogan that "Hackworth is not the change we need." Hackworth, a former mayor of Dunedin, laughed off the ad as an irrelevant and "totally bogus" scare tactic. "It's kind of a sign of desperation on her part," Hackworth said. "She's run out of things to talk about as they relate to things in Pinellas County, so she wants to talk about federal issues." The flier showcases portraits of the president and two quotes from 2008: one, from a radio interview, of Hackworth praising Obama's "issues and initiatives," and another, from the Times, saying Hackworth supports "universal health care and citizenship for illegal immigrants." The actual Times story describes Hackworth as supporting "Obama's plan for comprehensive immigration reform," though Latvala insisted the flier was correct. Latvala, the 10-year North Pinellas District 4 commissioner who won the Republican primary in August, said the ad was not negative or a stretch. 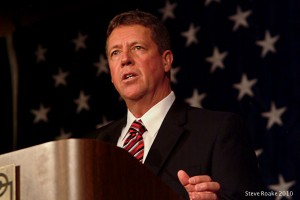 Bob Hackworth "I'm not going to bash him publicly. His record speaks for itself," she said. "He is quoted as saying how wonderful Obama's plans are … and that taxes are the solution. … Raising taxes is a local level issue, and that's what he has been talking about all through this campaign." In the heated runup to the Nov. 2 general election, both Latvala, 61, and Hackworth, 55, have accused the other's campaign of mudslinging. In a June e-mail, Latvala told Hackworth, "I will not participate in your style of campaigning." But Hackworth said Latvala's ploy to tie him to national controversy was just another page in her playbook of partisan slams. "It's hardly an original strategy, but there's usually a shred of connection between the federal issue and the race that people are running in," Hackworth said. "I guess it's politics as usual." Contact Drew Harwell at dharwell@sptimes.com or (727) 445-4170.

Just in time for Veterans day!

If you have not already read this report…you should!

Its a de-classified Senate Intelligence report detailing the events and people involved leading up to the false Intell used to enter the U.S. into the war with Iraq.

Your favorite guy Melvin F. Sembler is mentioned for his participation while serving as Ambassador to Italy…Enjoy

I would vote for Latvala because she will say anything or doing anything to get elected. She is an idiot in my eyes. Just ask the people in the East Lake area. Latvala you are one dumb blond!