Ministers secretly advised Muammar Gaddafi’s Libyan regime how to secure the successful early release of the Lockerbie bomber, documents obtained by The Daily Telegraph have disclosed.

By Christopher Hope and Robert Winnett
The Telegraph | Januart 31, 2011 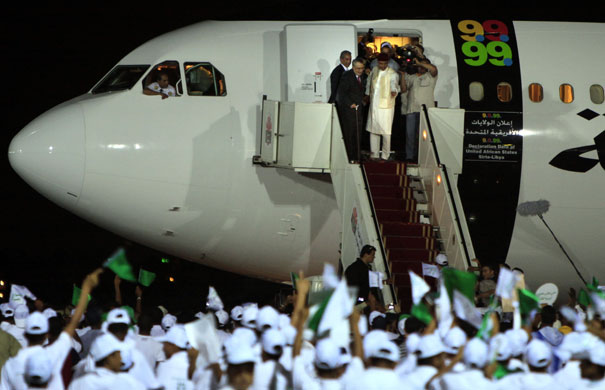 A Foreign Office minister sent Libyan officials detailed legal advice on how to use Abdelbaset al-Megrahi’s cancer diagnosis to ensure he was released from a Scottish prison on compassionate grounds.

The Duke of York is also said to have played a behind-the-scenes role in encouraging the terrorist’s release.

The Libyans closely followed the advice which led to the controversial release of Megrahi – who was convicted of the murder of 270 passengers on Pan Am Flight 103 – within months of the Foreign Office’s secret intervention.

The disclosure seriously undermines British Government claims that is was not complicit in the release of al-Megrahi, and that the decision to free the convicted terrorist was taken by the Scottish Executive alone.

It will also lead to renewed pressure from senior American politicians on David Cameron to release all internal documents detailing Britain’s role in the scandal. Last summer, the Prime Minister pledged to release the relevant information – but the publication has yet to occur sparking fears that a cover-up may have been ordered.

The Daily Telegraph today publishes more than 480 American documents detailing international relations with the Libyan regime over the past three years.

The documents – obtained by the WikiLeaks website and passed to this newspaper – provide the first comprehensive picture of the often desperate steps taken by western Governments to court the Libyan regime in the competition for valuable trade and oil contracts.

Any perceived political slight on the part of the Libyans often leads to western companies losing lucrative contracts with Gaddafi’s erratic behaviour a major problem in maintaining good relations.

Last year, the British Ambassador is recorded as telling his American counterparts in Tripoli that he had to negotiate with the Libyans “on their terms” and should “not be frightened by the name Gaddafi”.

The documents disclose in detail how British ministers and officials were desperate not to allow Libyan anger over the ongoing imprisonment of Megrahi to derail the growing commercial relationship between the two countries.

Megrahi, a Libyan intelligence officer, was imprisoned in 2001 for life after being found guilty of bombing Pan-Am Flight 103 over Lockerbie in 1988. For several years, the Libyans pressed for the terrorist to be returned to the north African country under a prisoner transfer agreement that was being negotiated.

According to American officials, Tony Blair was suspected of securing trade deals after agreeing to include Megrahi in the agreement. However, Megrahi was imprisoned in Scotland – where the offence occurred – and any decision on his release was for the Scottish authorities although Westminster drew up the relevant legislation. In October 2008 – as negotiations on the prisoner transfer agreement were ongoing –Megrahi was diagnosed as suffering from cancer.

It can now be disclosed that within a week of the diagnosis, Bill Rammell, a junior Foreign Office minister, had written to his Libyan counterpart advising him on how this could be used as the grounds of securing al-Megrahi’s compassionate release from prison. Rob Dixon, a senior Foreign Office official, met with the American Ambassador to brief him on the letter. An official American memo on the meeting states: “FCO Minister for the Middle East Bill Rammell sent Libyan Deputy FM Abdulati al-Obeidi a letter, which was cleared both by HMG and by the Scottish Executive, on October 17 outlining the procedure for obtaining compassionate release.

“It cites Section 3 of the Prisoners and Criminal Proceedings (Scotland) Act of 1993 as the basis for release of prisoners, on license, on compassionate grounds. Although the Scottish Crown informed the families of the Pan Am 103 victims in an email October 21 that the time frame for compassionate release is normally three months from time of death, Dixon stressed to us that the three month time frame is not codified in the law.”

Mr Dixon went on to disclose to the Americans that Jack Straw, the then Justice Secretary, had also spoken to Alex Salmond, the Scottish First Minister about the case which had led Government officials to believe that the terrorist would be released. The minute of the meeting with the Americans records: “Scottish First Minister Alex Salmond told Jack Straw that he will make the final decision in this case. Salmond told Straw that he would make the decision based on humanitarian grounds, not foreign policy grounds; Dixon told us HMG has interpreted this to mean that Salmond is inclined to grant the request.”

Following the meeting, the American Ambassador reported back to his superiors in Washington said that the release of al-Megrahi could “occur sooner rather than later” and that Whitehall officials were handling sensitive negotiations with the Libyans on the issue. Later documents also disclose that the Qatari government, one of the richest in the world, also became involved in the effort to secure al-Megrahi’s release. The Americans thought that the Qataris may have offered financial incentives to the Scottish Government. The Libyans are also recorded to have offered a “parade of treats” to the Scottish government.

A senior Qatari minister visited Scotland to discuss the case.

The documents reveal a meeting between the American Ambassador in Doha and the Qatari government. “At an October 28 meeting with MFA Minister of State for International Cooperation Khalid Al-Attiyah, Ambassador raised strong USG concerns about Qatar’s role in the release of convicted Lockerbie bomber Abdelbasit Al-Magrahi,” the record of the meeting states. “ Al-Attiyah said that Qatar became involved because Qatar, as 2009 President of the Arab League, had been asked by the Arab League to do so.

“Ambassador pressed the issue of whether Qatar had offered any financial or trade incentives to induce Al-Megrahi’s release. Al-Attiyah strongly dismissed such speculation, saying 'That is ridiculous; It was not necessary to offer money. It was all done within Scottish law. We offered no money, investment, or payment of any kind’.”

After Megrahi was released in August 2009, another American document records Gaddafi’s comments – which suggest that Prince Andrew, the UK’s trade envoy, may have played a role.

The document records: “He [Gaddafi] went on to thank his 'friend Brown’, the British Prime Minister, his government, Queen Elizabeth, and Prince Andrew, who 'against all odds encouraged this brave decision’. [Gaddafi] noted that the UK efforts would positively affect 'exchange’ between the two countries.

When al-Megrahi was finally released, it also emerged that Gordon Brown instructed the British ambassador to hand deliver a note to Gaddafi. The letter was ostensibly to ask the Libyan leader not to lionise the released terrorist but the delivery of the letter also presented British officials with the opportunity for a rare private meeting with Gaddafi. The leader usually only sees very senior foreign politicians and dignitaries.

The disclosure of the secret Foreign Office advice to the Libyans is set to spark renewed calls for the British government to appear before the US Senate to justify its role in the bomber’s release.

In September 2009, it emerged that Mr Rammell had told the Libyans that neither the Foreign Secretary or the Prime Minister wanted to see al-Megrahi die in prison. However, government ministers strenuously denied that they had become involved in the release.

David Miliband, the then Foreign Secretary, said that there had been “no double dealing”.