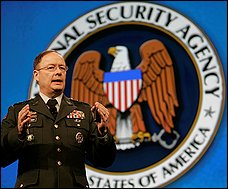 National Security Agency Director Keith B. Alexander is “working as quickly as he can” to resolve the issue, one key member of Congress said. (Jeff Chiu/Associated Press)

Three significant pieces of news, taken together, show that the Courts continue to chip away at Bush-and-now-Obama’s domestic surveillance programs. First, and potentially most importantly, the FISA Court, after learning more about what the collection of telecom metadata entailed, raised some concerns with the government, leading them to voluntarily stop collecting it.

The Foreign Intelligence Surveillance Court, which grants orders to U.S. spy agencies to monitor U.S. citizens and residents in terrorism and espionage cases, recently “got a little bit more of an understanding” about the NSA’s collection of the data, said one official, who spoke on the condition of anonymity because such matters are classified.

The data under discussion are records associated with various kinds of communication, but not their content. Examples of this “metadata” include the origin, destination and path of an e-mail; the phone numbers called from a particular telephone; and the Internet address of someone making an Internet phone call. It was not clear what kind of data had provoked the court’s concern.

The NSA voluntarily stopped gathering the data in December or January rather than wait to be told to do so, the officials said. The agency had been collecting it with court permission for several years, officials said.

Next, on Friday, al-Haramain responded to Vaughn Walker’s tidy judgment on FISA–which I have argued was crafted to be rather tempting to the government–by basically accepting his judgment and backing off any further constitutional claims associated with the suit. In their proposed judgment, al-Haramain basically:

• Asks for the $61,200 in damages defined by the statute ($20,400 for each of three plaintiffs, which comes from $100/day for each day of violation)
• Asks for $550,800 total in punitive damages ($183,600 for each of three plaintiffs)
• Asks for legal fees (bmaz estimates these might run to around $3,375,000)
• Dismisses all other constitutional claims and claims against Robert Mueller as an individual
• Requests a declaration that “the defendants’ warrantless electronic surveillance of plaintiffs was unlawful as a violation of FISA”
• Requests an order that the government purge all information illegally collected (except that which would be exculpatory)

In short, al-Haramain is basically saying, “gosh what a nifty solution you’ve crafted, Judge Walker. Let’s see what Eric Holder thinks of it.”

Now, the government might have some complaint about the particular description of its illegal wiretapping. And I’m betting they’re going to have operational troubles with purging the illegally collected information, particularly if it means purging a lot of poisoned fruit along with it. But I still do think the government will try to find a way to accept Walker’s nifty solution.

Government Backs Down in Request to Access Stored Emails without Warrant

In the face of stiff resistance from Yahoo! and a coalition of privacy groups, Internet companies and industry coalitions led by EFF, the U.S. government today backed down from its request that a federal magistrate judge in Denver compel Yahoo! to turn over the contents of a Yahoo! email user’s email account without the government first obtaining a search warrant based on probable cause.

The EFF-led coalition filed an amicus brief this Tuesday in support of Yahoo!’s opposition to the government’s motion, agreeing with Yahoo! that the government’s warrantless seizure of an email account would violate both federal privacy law and the Fourth Amendment to the Constitution. In response, the Government today filed a brief claiming that it no longer had an investigative need for the demanded emails and withdrawing the government’s motion.

As EFF points out, the government has repeatedly backed down when challenged on this type of collection and related collection.

This is not the first time the government has evaded court rulings in this area. Most notably, although many federal magistrate judges and district courts have ruled that the government may not conduct real-time cellphone tracking without a warrant, the government has never appealed any of those decisions to a Circuit Court of Appeals, thereby preventing the appeals courts from ruling on the issue. Similarly, a federal magistrate judge in New York, Magistrate Judge Michael H. Dolinger, has twice invited EFF to brief the court on applications by the government to obtain private electronic communications without a warrant, and in each case, the government withdrew its application rather than risk a ruling against it (in one case the government went so far as to file a brief anticipating EFF’s opposition before finally dropping the case).

Which I think illustrates the common theme here. While we don’t yet know what the Obama Administration will do in the case of al-Haramain, in the two other cases, they have backed off of surveillance activities to avoid any adverse ruling from Courts. That’s partly a testament to their discomfort with their own legal position with regards to these activities. But it’s also an indication that they’d rather continue their programs in some lesser form than risk having a Court declare the whole program unconstitutional.

If I’m right about all this, it means the government is balancing facing an Appeals Court on FISA and State Secrets, versus paying less then $4 million to close the chapter on Bush’s most egregious form of domestic surveillance while still protecting executive programs that engage in similar collection.