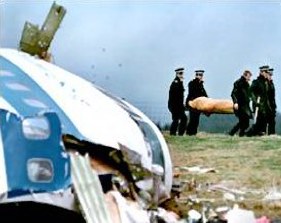 LONDON — The oil giant BP faced a new furor on Thursday as it confirmed that it had lobbied the British government to conclude a prisoner-transfer agreement that the Libyan government wanted to secure the release of the only person ever convicted for the 1988 Lockerbie airliner bombing over Scotland, which killed 270 people, most of them Americans.

The admission came after American legislators, grappling with the controversy over the company’s disastrous Gulf of Mexico oil spill, called for an investigation into BP’s actions in the case of the freed man, Abdel Basset Ali al-Megrahi.

The former Libyan intelligence agent was released and allowed to return to Libya last August after doctors advised the Scottish government that he was likely to die within three months of advanced prostate cancer. But nearly a year later, he remains alive, and free, in the Libyan capital, Tripoli.

BP’s statement on Thursday repeated earlier acknowledgments that it had promoted the transfer agreement to protect a $900 million offshore oil-and-gas exploration deal off Libya’s Mediterranean coast. The British justice minister at the time, Jack Straw, admitted shortly after Mr. Megrahi was repatriated and freed that the BP deal was a consideration in the government’s review of his case.

In the end, Mr. Megrahi was not released under the prisoner transfer agreement. Instead, to the consternation of the Obama administration, and of many of the victims’ families, the Scottish government released him in August 2009 under provisions in Scottish law that allow for a prisoner’s sentence to be commuted on humanitarian grounds, because Mr. Megrahi had terminal prostate cancer. That freed him from serving any further prison time in Libya, as he would have had to do under the transfer pact.

American anger over the case — which has only grown as Mr. Megrahi’s life endures — found a new outlet this week, as four American senators announced that they had written a letter to Secretary of State Hillary Rodham Clinton asking for a State Department investigation into BP’s role in the prisoner transfer agreement. One senator, Charles E. Schumer, Democrat of New York, told reporters that BP should freeze its operations in Libya because it “should not be allowed to profit on this deal at the expense of the victims of terrorism.”

BP’s business dealings in Libya include an exploration deal in the Gulf of Sidra and others in the western desert, which the company estimates could lead to an eventual BP investment of up to $20 billion. The deals represent BP’s return to Libya after decades of exclusion that followed nationalization of the company’s interests there in the 1970s.

BP’s response to the senators’ challenge came in a statement released Thursday, in which it stuck to its claim that its lobbying was focused on the prisoner transfer pact, not on Mr. Megrahi himself, and that the company had nothing to do with the decision by the Scottish authorities to release him to Libya.

But the company’s critics have said that such a distinction was largely illusory, since Libya’s pressure for the prisoner transfer pact was primarily motivated, as Libyan officials said at the time, by their desire to bring Mr. Megrahi home.

Long before the Gulf of Mexico disaster, the British government’s role in the Megrahi release — and the involvement of British companies with interests in Libya, including BP — had caused deep strains between the Obama administration and the former Labour Party government in London, which was ousted in a general election in May and replaced by a coalition of Conservatives and Liberal Democrats.

Although senior figures in the Labour government insisted that the Megrahi decision was taken independently by the Scottish government, which has wide-ranging legal powers of its own, an official paper trail showed that officials in London had told Scottish officials, in the context of the prisoner transfer agreement, that letting Mr. Megrahi go would benefit British commercial interests.

That led to widespread suspicions that the Labour government, eager to promote British commercial interests in Libya but reluctant to be seen taking a step — the release of Mr. Megrahi — that would anger Washington, chose to encourage instead an end-around solution that had the Scottish government making the decision.

British officials have noted privately that the last three American administrations have been keen for American oil companies to strike deals with Libya, and that BP has been joined in the contest for potentially lucrative deals by several American oil giants, including Exxon Mobil and Chevron.

Still, the chain of events surrounding Mr. Megrahi fostered deep disillusionment in Washington, where politicians and senior officials criticized what they regarded as Britain’s duplicity in the affair.

Their anger was based, in part, on assurances the United States said it had been given at the time of the Lockerbie trial, held before a special Scottish court sitting in the Hague, that anybody convicted in the case would serve the full term handed down by the court. Mr. Megrahi’s conviction was the only one achieved in the case, after a Libyan accused of being an accomplice, like Mr. Megrahi an agent of Libya’s secret intelligence service, was found not guilty and freed.