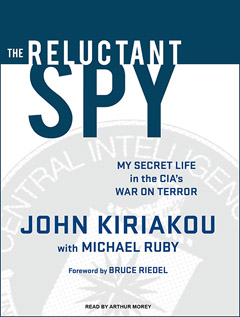 In 2007, ex-CIA counterterrorism officer John Kiriakou transformed the national debate on torture by telling ABC News that while in U.S. custody, al-Qaida operative Abu Zubaydah had been waterboarded only once for about 30 seconds before promptly coming clean about his terrorist activities.

Kiriakou repeated the story to just about every major news outlet that would listen: Though the enhanced interrogation technique is morally wrong, he stated, it worked, plain and simple.

But the New York Times uncovered some two years later that Zubaydah had actually been waterboarded upward of 80 times and the information that he divulged may not have been as actionable as Kiriakou made it seem, breeding speculation that Kiriakou was a CIA media plant.

Now, in his new book, The Reluctant Spy: My Secret Life in the CIA’s War on Terror, the now-Senate Foreign Relations Committee adviser finally comes clean.

“What I told Brian Ross in late 2007 was wrong on a couple of counts,” Kiriakou writes. “I wasn’t there when the interrogation took place; instead, I relied on what I’d heard and read inside the agency at the time.”

Regrettably, he waits until the epilogue — until the second-to-last paragraph of the entire autobiography — to say so. To get to the confession, readers must wade through pages of platitudes, braggadocio and clunky accounts of how work took a toll on the author’s personal life, the sum of which ends up being no different from what Ross encountered when he interviewed Kiriakou in 2007: a waste of time.

It stands to figure that if this book was meant as an act of contrition, the contrition itself would figure more prominently. So what is this?

“A cherished axiom at the CIA is that its successes necessarily remain shrouded in secrecy while its failures and embarrassments get ample attention from congressional overseers, book authors, investigative reporters, and others who simply detest the very idea of clandestine activity by a democratic government.”

Is this book, then, Kiriakou’s attempt to highlight his professional accomplishments and show critics that he is more than just the sum of his misrepresentative sound bites?

No doubt, he is. But if that’s the goal, in print, it comes off as trite and self-aggrandizing.

He chronicles his entree to the agency with ample accounts of how impressively he aced every admissions test despite lacking a military background. By no fault of his own, besides his being a workaholic, his first wife was driven to an affair, which led to a messy divorce and even more messy custody battles. And Kiriakou was eventually forced by an overzealous superior to choose between work and his two sons (he chose the latter).

Descriptions of his own heroics in the field are often followed by haughty statements like, “Yeah, I really said that.” But through all the turbulent years at home and abroad, Kiriakou keeps his hands clean.

True as all this may be, humble it is not.

Much of the book centers on his time in Greece, which yields some mildly interesting human drama surrounding CIA operative work. But not until more than halfway through the book does he finally address his exploits in the war on terrorism, where he recruited informants and was instrumental in the capture of Zubaydah, the high point of both Kiriakou’s career and his book.

He does constructively criticize how tension and lack of cooperation between the FBI and the CIA may have deprived both agencies of valuable intelligence. But the bulk of Kiriakou’s forthcomings are already public record. Before the book went to print, CIA censors effectively sanitized most new information that could have been useful to the public — a fact that, to his credit, Kiriakou fully discloses when he changes names, places or whole accounts (which he does plenty).

In these chapters, Kiriakou engages in strong, albeit exhausted, criticism of the Bush administration. He calls Guantánamo Bay, Cuba, a “national disgrace” and says the executive branch bungled the wars in Iraq and Afghanistan and had “more hidden agendas than even Richard Nixon could have dreamed up.”

The infamous torture memos, he says, basically argue “that ducks don’t quack and that apples are oranges if government lawyers say they are.”

“There are things we should not do, even in the name of national security,” he adds. “One of them, I now firmly believe, is torture.”

The whitewashing, coupled with Kiriakou’s public history, make it hard to discern truth from speculation from exaggeration.

But the author maintains he was a victim in the unfortunate televised gaffe.

“I probably should have demurred then and there, saying these were subjects I didn’t want to discuss publicly,” he writes — again in the epilogue. “In retrospect, it was a valuable lesson in how the CIA uses the arts of deception even among its own.”