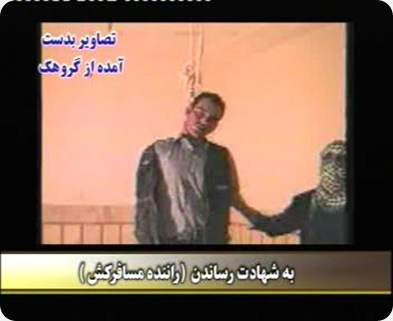 Imagine if a group of leading American liberals met on foreign soil with -- and expressed vocal support for -- supporters of a terrorist group that had (a) a long history of hateful anti-American rhetoric, (b) an active role in both the takeover of a U.S. embassy and Saddam Hussein's brutal 1991 repression of Iraqi Shiites, (c) extensive financial and military support from Saddam, (d) multiple acts of violence aimed at civilians, and (e) years of being designated a "Terrorist organization" by the U.S. under Presidents of both parties, a designation which is ongoing? The ensuing uproar and orgies of denunciation would be deafening.

But on December 23, a group of leading conservatives -- including Rudy Giuliani and former Bush officials Michael Mukasey, Tom Ridge, and Fran Townsend -- did exactly that. In Paris, of all places, they appeared at a forum organized by supporters of the Mujaheddin-e Khalq (MEK) -- a group declared by the U.S. since 1997 to be "terrorist organization" -- and expressed wholesale support for that group. Worse -- on foreign soil -- they vehemently criticized their own country's opposition to these Terrorists and specifically "demanded that Obama instead take the group off the U.S. list of foreign terrorist organizations and incorporate it into efforts to overturn the mullah-led government in Tehran." In other words, they are calling on the U.S. to embrace this Saddam-supported, U.S.-hating Terrorist group and recruit them to help overthrow the government of Iran. To a foreign audience, Mukasey denounced his own country's opposition to these Terrorists as "nothing less than an embarrassment."

Using common definitions, there is good reason for the MEK to be deemed by the U.S. Government to be a Terrorist group. In 2007, the Bush administration declared that "MEK leadership and members across the world maintain the capacity and will to commit terrorist acts in Europe, the Middle East, the United States, Canada, and beyond," and added that the group exhibits "cult-like characteristics." The Council on Foreign Relations has detailed that the MEK has been involved in numerous violent actions over the years, including many directed at Americans, such as "the 1979 takeover of the U.S. embassy in Tehran by Iranian revolutionaries" and "the killings of U.S.military personnel and civilians working on defense projects in Tehran in the 1970s." This is whom Guiliani, Ridge, Townsend and other conservatives are cheering.

Applying the orthodoxies of American political discourse, how can these Terrorist-supporting actions by prominent American conservatives not generate intense controversy? For one thing, their appearance in France to slam their own country's foreign policy blatantly violates the long-standing and rigorously enforced taboo against criticizing the U.S. Government while on dreaded foreign soil (the NYT previously noted that "nothing sets conservative opinion-mongers on edge like a speech made by a Democrat on foreign soil"). Worse, their conduct undoubtedly constitutes the crime of "aiding and abetting Terrorism" as interpreted by the Justice Department -- an interpretation recently upheld as constitutional by the Supreme Court's 5-4 decision last year in Holder v. Humanitarian Law. Georgetown Law Professor David Cole represented the Humanitarian Law plaintiffs in their unsuccessful challenge to the DOJ's interpretation of the "material support" statute, and he argues today in The New York Times that as a result of that ruling, it is a felony in the U.S. "to engage in public advocacy to challenge a group's 'terrorist' designation or even to encourage peaceful avenues for redress of grievances."

Like Cole, I believe the advocacy and actions of these Bush officials in support of this Terrorist group should be deemed constitutionally protected free expression. But under American law and the view of the DOJ, it isn't. There are people sitting in prison right now with extremely long prison sentences for so-called "material support for terrorism" who did little different than what these right-wing advocates just did. What justifies allowing these Bush officials to materially support a Terrorist group with impunity?

Then there's CNN. How can they possibly continue to employ someone -- Fran Townsend -- who so openly supports a Terrorist group? Less than six months ago, that network abruptly fired its long-time producer, Octavia Nasr, for doing nothing more than expressing well wishes upon the death of Sayyed Mohammed Hussein Fadlallah, one of the Shiite world's most beloved religious figures. Her sentiments were echoed by the British Ambassador to Lebanon, Frances Guy, who wrote a piece entitled "The Passing of a Decent Man," and by the journal Foreign Policy, which hailed him as "a voice of moderation and an advocate of unity." But because Fadlallh had connections to Hezbollah -- a group designated as a Terrorist organization by the U.S. -- and was an opponent of Israel, neocon and other right-wing organs demonized Nasr and CNN quickly accommodated them by ending her career.

Granted, Nasr was a news producer and Townsend is at CNN to provide commentary, but is it even remotely conceivable to imagine CNN employing someone who openly advocated for Hamas or Hezbollah, who met with their supporters on foreign soil and bashed the U.S. for classifying them as a Terrorist organization and otherwise acting against them or, more radically still, demanding that the U.S. embrace these groups as allies? To ask the question is to answer it. So why is Fran Townsend permitted to keep her CNN job even as she openly meets with supporters of a Terrorist group with a long history of violence and anti-American hatred?

There is simply no limit on the manipulation and exploitation of the term "terrorism" by America's political class. Joe Biden and Mitch McConnell support endless policies that slaughter civilians for political ends, yet with a straight face accuse Julian Assange -- who has done nothing like that -- of being a "terrorist." GOP Rep. Peter King is launching a McCarthyite Congressional hearing to investigate radicalism and Terrorism sympathies among American Muslim while ignoring his own long history of enthusiastic support for Catholic Terrorists in Northern Ireland; as Marcy Wheeler says: "Peter King would still be in prison if the US had treated his material support for terrorism as it now does."

And WikiLeaks this morning published a diplomatic cable from the U.S. summarizing the long-discussed meeting on July 25, 1990, at which the U.S. Ambassador to Iraq, April Glaspie, talked to Saddam -- a month before Iraq's invasion of Kuwait -- about the history of extensive American support for his regime, the desire of the U.S. for friendly relations with Saddam, and her statement that the U.S. does not care about Saddam's border disputes with Kuwait (Glaspie recorded that she told Saddam: "then, as now, we took no positions on these Arab affairs"). Months later, the U.S. attacked Iraq and cited a slew of human rights abuses and support for Terrorism that took place when the U.S. was arming and supporting Saddam and during the time they had removed Iraq from the list of State Sponsors of Terrorism in order to provide that support.

The reason there isn't more uproar over these Bush officials' overt foreign-soil advocacy on behalf of a Terrorist group is because they want to use that group's Terrorism to advance U.S. aims. Using Terrorism on behalf of American interests is always permissible, because the actual definition of a Terrorist -- the one that our political and media class universally embraces -- is nothing more than this: "someone who impedes or defies U.S. will with any degree of efficacy."

Even though the actions of these Bush officials violate every alleged piety about bashing one's own country on foreign soil and may very well constitute a felony under U.S. law, they will be shielded from criticisms because they want to use the Terrorist group to overthrow a government that refuses to bow to American dictates. Embracing Terrorist groups is perfectly acceptable when used for that end. That's why Fran Townsend will never suffer the fate of Octavia Nasr, and why her fellow Bush officials will never be deemed Terrorist supporters by the DOJ or establishment media outlets, even though what they've done makes them, by definition, exactly that.

UPDATE II:  In 2008, an Iranian-American woman --Zeinab Taleb-Jedi -- was convicted in a federal court of providing "material support for terrorism" based solely on her membership in MEK.  She argued that MEK should not be deemed a Terrorist group and that she has the First Amendment right to belong to it, but the judge rejected both claims.  While she joined the group as opposed to merely advocating for it (the way these conservatives are doing), the Supreme Court in Huminatarian Law made clear that both can be means of providing "material support."  Why should Taleb-Jedi be prosecuted but not Giuliani, Townsend, Ridge and friends?