“ ... As TPM reports, conservative voter suppression schemes are often couched in claims that “ineligible voters are fraudulently stealing elections.” No evidence supports this claim, but Tea Party groups in particular have taken it up as a rallying cry this election cycle. ... ” 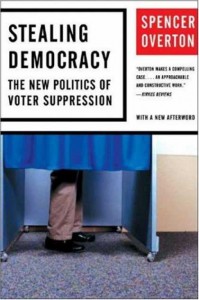 Mark Kirk, the Republican U.S. Senate candidate in Illinois, is excitedly planning to send so-called voter integrity teams into mostly black Chicago neighborhoods, reports TPM. In a secretly recorded telephone conference with members of the state’s Republican Party leadership, Kirk said that he was devising plans to focus the project in “key vulnerable precincts” where “the other side might be tempted to jigger the numbers.”

Kirk’s plan—and his unsubstantiated claims about voter fraud—are a now-standard part of the Republican Party’s voter-suppression playbook, which gets dusted off every election.

“Practices that fly under the banner of ‘voter integrity’ are efforts to suppress voters. There are a lot of ways it can happen,” says Laughlin Macdonald, director of the ACLU’s Voting Rights Project. And, he says, the “targets are often people of color, who tend to vote Democratic.”

Kirk’s plans are just the tip of the iceberg.

Fire Dog Lake reports that GOP politicians are carrying out a similar effort in Wisconsin:

Basically, the Republican Party of Wisconsin would identify minority and student voters in Wisconsin using the voter file. Americans for Prosperity would send mail to this list “indicating the voter must call and confirm their registration information, and telling them if they do not call the number provided they could be removed from the voter lists.” This is untrue, and also could be illegal coordination between a state party and an outside group. But this highly mobile group of voters may no longer live at the addresses provided, meaning that the mail sent by AFP would get bounced back to them. Then, tea party affiliates would send their members as monitors to the polls on Election Day, with a list of individuals whose postcards were returned to challenge those voters at the polls. This is textbook voter caging, a technique Republicans have used in past elections.

As TPM reports, conservative voter suppression schemes are often couched in claims that “ineligible voters are fraudulently stealing elections.” No evidence supports this claim, but Tea Party groups in particular have taken it up as a rallying cry this election cycle.

Michael C. Dorf, a lawyer for the Giannoulias campaign, sent a letter to the office of the Cook County State’s Attorney. In the letter obtained by TPMMuckraker, Dorf alleged that the tactics used by Republicans and identified by groups like Project Vote are “scare tactics” which he said “violate both state and federal voter protection laws.”

In a statement, Giannoulias said, “That sort of Florida-style voter intimidation is disgusting, illegal, and smacks of the Karl Rove politics that Illinois voters are sick of.”

TPM makes clear that Kirk is not a lone Republican actor in his endeavors. The Republican Party is orchestrating the effort:

According to an Oct. 6 posting on the Illinois GOP website by Chairman Pat Brady, the Republicans were seeking volunteers for their “ballot integrity” program. Brady noted that “ballot integrity will be a key ingredient to our success, and we need your help.”

The ACLU and other groups say they’re doing what they can to push back against voter suppression. But, says Macdonald, “It happens all the time. It really is one of the enduring ironies that there are more constitutional provisions to protect the right to vote and yet people are always willing to try to suppress others going to polls.”