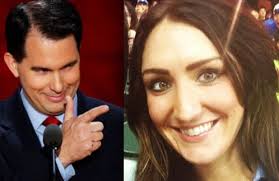 ” … In August, Walker also fired Steven Krieser from the Department of Transportation after Krieser compared illegal immigrants to Satan on Facebook. … “

A finance staffer for Gov. Scott Walker’s campaign was fired for tweeting racist remarks from her personal account, making her the second staffer to be removed for racially charged social media posts in recent months.

Taylor Palmisano, 23, was Walker’s campaign deputy finance director, according to a report from the Milwaukee Journal Sentinel.

Palmisano tweeted from the account @itstaytime on March 9, 2011: “I will choke that illegal mex cleaning in the library. Stop banging fucking chairs around and turn off your Walkman.”

Two months earlier, Palmisano posted, “This bus is my worst fucking nightmare. Nobody speaks English & these ppl dont know how 2 control their kids #only3morehours #illegalaliens.” The Twitter account has since been deleted.

Jonathan Wetzel, Friends of Scott Walker spokesperson, told the Journal Sentinel Palmisano was immediately removed and her remarks do not reflect the views of the campaign. Palmisano also released a statement saying she regrets the “offensive and irresponsible remarks,” and “the consequences of making such unacceptable statements.”

In August, Walker also fired Steven Krieser from the Department of Transportation after Krieser compared illegal immigrants to Satan on Facebook.

“The Hispanic community in Wisconsin has grown rapidly in recent years,” Walker said in the statement. “The Mexican Consulate office serving Wisconsin is located in Chicago, and it also serves Illinois and Indiana.”

University of Wisconsin political science professor Ben Marquez said the request to establish a consulate could be a way to help represent area Latinos.

“[Consulates] can be sources of information and representation for Mexican nationals, but it’s been a long time since the Mexican council was an effective voice for the Latino citizen community,” Marquez said. “But it could just be a practical way of bringing Mexican government representation into a state where there are increasing numbers of Mexican nationals.”

This move, as well as the firing of previous aides who spoke negatively of the Hispanic population, are likely part of a Republican effort to reach out to minority voters, Marquez added.

Marquez said the Republican Party nationwide is facing a problem trying to reconnect with Hispanic voters that they may have alienated in the 2012 election by using racist and anti-immigrant rhetoric.

“Opinion polls have shown that Latinos don’t separate themselves from immigrants in the face of these attacks,” Marquez said. “They see themselves as being personally attacked.”

However, Marquez acknowledged that this will be a difficult struggle for the party to face, especially with the growing presence of the more conservative tea party faction.

Marquez added a typical Republican strategy to address the minority issue has been to appeal to those that are viewed as accomplished and already conservative first.

“The Republican Party has a serious problem right now,” he said. “I think Governor Walker understands that and is looking for a way to do so.”

Friends of Scott Walker and Walker’s office did not respond for comment.