Ohio: Fear and Loathing on the Far Right - The Constantine Report
0 SHARES

GOP Watch » Ohio: Fear and Loathing on the Far Right 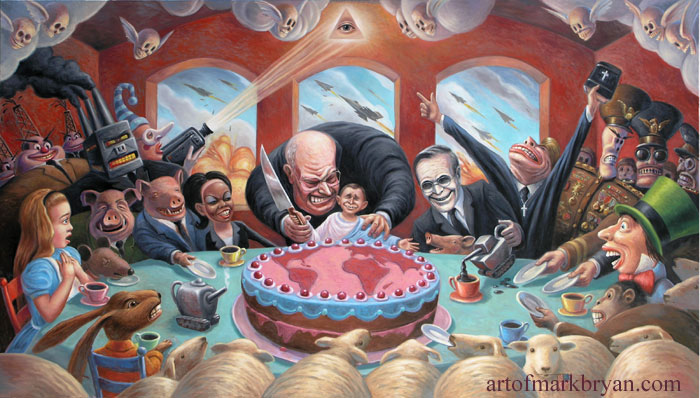 Molly Ivins, the late syndicated columnist from Texas, got it right when she wrote, “Being slightly paranoid is like being slightly pregnant — it tends to get worse.”For the truth of that statement, look no further than the agenda for an April 17 event planned by the Springboro Tea Party just north of Cincinnati.

The event, called “Bringin’ Back Conservatism: Doin’ It Again in 2010,” is one of several planned by Tea Party groups across the nation that are timed to coincide with the federal tax filing deadline.

I’ve written before that most Teabaggers have little in the way of a coherent political philosophy other than their shared hatred of Big Government, which they simplistically and erroneously view as the source of all problems. (I’d argue that problems stemming from a bloated government are less harmful than those caused by a reckless, unfettered free market, although that’s really a false dichotomy anyhow.)

To kick off the Springboro event, Teabaggers will watch a movie on DVD. The actual film is being selected by an online poll now underway, but the choices have such titles as Shadow Government, Camp FEMA, Fall of the Republic and — in a nod to anti-Obama “birthers” everywhere — A Question of Eligibility. Be sure to bring popcorn.

The choices feature a veritable cornucopia of current far right thinking, displaying the distorted fears and anxieties of people who feel they’re disenfranchised from their government.

Fall of the Republic, for example, alleges an offshore corporate cartel is bankrupting the U.S. economy by design. It’s part of a plot to establish a world government in which the dollar will be replaced with a new global currency.

Camp FEMA alleges the government has created secret concentration camps across the nation to detain U.S. citizens if they get too unruly. (In fact, some camps do exist but aren’t exactly a secret; they’ve been used to hold undocumented immigrants, who are a frequent punching bag for the Tea Party crowd.)

I could go on, but you can see the general theme emerging. All of this reminds me of another group that flourished during paranoid times, the John Birch Society in the 1950s. Birchers believed secret Communists had infiltrated U.S. society and opposed such efforts as fluoridating public water supplies, calling it a Communist plot to harm Americans’ health, and the Civil Rights Act of 1964, alleging it infringed on states’ rights.

Meanwhile, Republican officials are actually encouraging this sort of thinking in a cynical ploy to regain control of Congress and the presidency.

U.S. Rep. John Boehner, the House Minority leader who hails from West Chester, recently called Tea Party followers “great patriots.” Boehner said, “It’s not enough, however, for Republicans to simply voice respect for what the Tea Partiers are doing, praise their efforts and participate in their rallies. Republicans must listen to them, stand with them and walk among them.”

As Hamilton County Republican Party Chairman Alex Triantafilou posted on his blog, “We continue to embrace those energized by the Tea Party. Our challenge is to field candidates who can earn their support. We’ll keep trying locally.”

And let’s not forget all the candidates — including county commission contenders Chris Monzel and Leslie Ghiz — who recently signed a Tea Party pledge. (Some Democrats also aren’t immune from this nonsense. County Auditor Dusty Rhodes writes a regular column on a local Tea Party blog.)

The thing is, Tea Partiers aren’t wrong: They are disenfranchised, to a degree.

Income disparity between the middle class and the wealthy in the United States is at an all-time high, even higher than during the Great Depression, and has almost doubled since 2000.

The affluent are paying far less in taxes than at any other time in modern history. Timid politicians have let corporations run amok, flooding our nation with dangerous, barely scrutinized prescription drugs and unsafe toys, just to name two examples.

This has all happened, in large measure, because politicians have exploited fear and anger to convince many citizens to vote against their own economic self-interest.

Unfortunately, Greater Cincinnati and Southwest Ohio have always seemed especially vulnerable to bad ideas born of fear and paranoia. A prime example of this is the city charter amendment prohibiting the fluoridation of Cincinnati’s water system unless voters first approve it.

The embarrassing kicker? It was added in 1974, a decade or more after most rational people gave up that fight. Only when the Ohio Environmental Protection Agency intervened did fluoride finally get added.

I hope it doesn’t take that long for people to get wise about the Tea Party’s rhetoric.