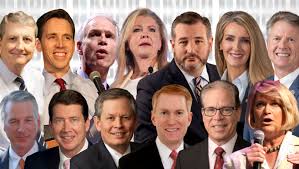 Koch, which is controlled by multibillionaire Charles Koch, boasts a corporate Pac that has donated $607,000 to the campaigns or leadership Pacs of 52 election deniers since January 2021, making Koch’s Pac the top corporate funder of members who opposed the election results, according to OpenSecrets, which tracks campaign spending.

In addition, the Super Pac Americans for Prosperity Action to which Koch Industries has given over $6m since January 2021, has backed some election deniers with advertising and other communications support, as well as a few candidates Donald Trump has endorsed who tried to help him overturn the 2020 election, or raised doubts about the final results.

A top official with AFP Action told Politico after the January 6 insurrection by Donald Trump supporters that it planned to “weigh heavily” future spending and back “policy makers who reject the politics of division”.

Election and campaign finance watchdogs say that the financial support for candidates who were election deniers by Koch’s Pac and the Super Pac AFP Action is very disturbing given the threats to democracy posed by election deniers.

“There’s a unique danger in having politicians who cast doubt on the validity of the last election results play a role in certifying the next election,” said Ian Vandewalker, a senior counsel for the Democracy program at the Brennan Center for Justice.

“Even if they don’t take any overt action to reject the will of the voters, the election denial message itself harms voter confidence in the system. Democracy requires the losing side to accept the results – without that we could see civil unrest on a much larger scale than January 6.”

Although the Koch-funded Super Pac AFP Action had suggested it would not back election deniers after 6 January, analysts aren’t shocked given Koch’s lobbying and legislative priorities, which include fighting various tax and regulatory measures related to fossil fuel issues including climate change that affect the company’s bottom line.

Koch spent $12.2m last year on lobbying – more than any other oil and gas company during 2021.

“Like other corporations pledging change following January 6, Koch Industries has returned to business as usual,” said Sheila Krumholz, who leads OpenSecrets.” Without repercussions and continued public attention, companies will go back to funding politicians who support their agenda.”

“Like many big business spenders, Koch seems more interested in their favored party controlling Congress than the characteristics of specific members,” Vandewalker added.

To be sure, the Koch Pac’s support for 52 election deniers included a number of members whose votes are often helpful to fossil fuel interests.

Senator John Kennedy of Louisiana, who is often a staunch ally of fossil fuel interests, received $20,000 from Koch’s Pac, a sum only matched by the corporate Pac of Capital One. Kennedy teamed up with other senators in January 2021 on a statement that claimed the 2020 election was “rife with allegations of fraud and irregularities that exceed any in our lifetimes”.

Senator Roger Marshall of Kansas, where Koch is headquartered, also voted against certifying Biden’s election and has received support from Koch’s Pac. Marshall is not up for re-election this year.

Separately, Americans for Prosperity Action, to which Koch has donated $6m, has spent almost $20m on ads and other communications much of which has gone to support some election deniers running for the Senate and House, plus Senate candidates who tried to help Trump reverse the 2020 election results or who have raised doubts about its outcome.

For instance, House member Ted Budd, who voted against certifying Biden’s win on 6 January, and now hopes to win a Senate seat in North Carolina, has benefited from almost $3.1m that AFP Action has spent to help him win the seat of the retiring senator Richard Burr. Budd has also told CNN that he had “constitutional concerns” about the election while acknowledging that Biden is president.

Similarly, two House members who opposed certifying Biden’s victory, Kat Cammack of Florida and Steve Chabot of Ohio, have both attracted backing from AFP Action. AFP Action has spent $369,750 to help Cammack and $287,902 to help Chabot.

Moreover, AFP Action has spent $4.9m to boost the Missouri attorney general, Eric Schmitt, who filed a lawsuit in December 2020 in tandem with the Texas attorney general to overturn the election results, and is running for an open seat.

The Wisconsin senator Ron Johnson also has benefited from $4.2m spent by AFP Action to help him in what seems to be a tight re-election race. According to revelations at a House January 6 committee hearing in June, an aide to Johnson reportedly helped promote efforts to substitute fake electors for Trump for legitimate ones that Biden won in the run up to 6 January when Congress certified the election results.

And Mehmet Oz, the GOP Senate candidate in Pennsylvania, whose campaign has been backed by over $2m of ad and other support from AFP Action, told Fox News in September that “lots more information” was needed to assess whether Trump won the 2020 election, contradicting prior Oz remarks that he would have certified Biden’s election if he was senator.

Election objectors won substantial donations from other corporate Pacs besides Koch’s. OpenSecrets reported in August that altogether members who voted against certifying Biden’s win received a whopping $22m post-January 6 from the Pacs of 700 corporations. Besides Koch’s Pac, the other top corporate Pacs were those of Home Depot and Boeing that respectively ponied up $593,000 to 44 members and $520,000 to 27 members.

Still, at least one veteran of a thinktank that Charles Koch co-founded and has helped fund says that the company’s ongoing support for election deniers is very troubling.

“When the only elected officials who will carry your political water are proto-fascists, what is one to do?” said Jerry Taylor, a former vice-president at the Cato Institute in DC where he oversaw climate and energy issues. “Charles Koch has made his choice. This self-proclaimed voice of freedom and liberty has apparently decided that advancing the public policies he desires is more important than democracy.

“His choice is not unlike the choices that most German industrialists made in the Weimar Republic.”

In recent polls, American voters ranked “threats to democracy” as the most important issue facing the country. At a time of climate collapse, inflation and a pandemic, this is a remarkable statement on the fragility of America’s fundamental rights and freedoms.

The country is seeing a dizzying number of assaults on democracy, from draconian abortion bans to a record number of book bans. Politicians who spread lies and sought to delegitimize the 2020 election are pursuing offices that will put them in control of the country’s election machinery. Meanwhile, the supreme court is enforcing its own agenda on abortion, guns and environmental protections – often in opposition to public opinion.

With so much on the line, journalism that relentlessly reports the truth, uncovers injustice, and exposes misinformation is absolutely essential. We need your support to help us power it. Unlike many others, the Guardian has no shareholders and no billionaire owner. Just the determination and passion to deliver high-impact global reporting, always free from commercial or political influence. Reporting like this is vital for democracy, for fairness and to demand better from the powerful.

We provide all this for free, for everyone to read. We do this because we believe in information equality – that everyone needs access to truthful journalism about the events shaping our world, regardless of their ability to pay for it.