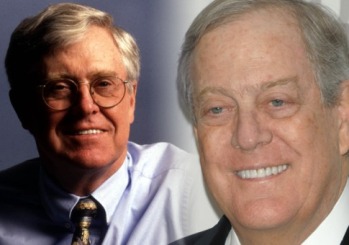 Based in Wichita, Kan., Koch Industries has annual revenues estimated at $100 billion, according to a recent New Yorker article by Jane Mayer.

Economics professor Russell Sobel recently told the West Virginia Public News Service that his department would lose two faculty members and two graduate fellowships without money from the Kochs. Sobel also works closely with the Public Policy Foundation of West Virginia, the Morgantown think tank which published his book, Unleashing Capitalism: Why Prosperity Stops at the West Virginia Border and How to Fix It, in 2007.

John A. Dove, a Charles G. Koch Doctoral Fellow at WVU, is also an associate fellow with the Public Policy Foundation. But Sobel told the Public News Service that the Koch brothers have no influence over research by his department’s faculty and students.

The Public Policy Foundation is part of the State Policy Network, a group of conservative organizations around the country. Jim Shaffer, president of the foundation and a member of the state Republican Party Executive Committee, did not return a telephone message left at the group’s Morgantown offices.

West Virginia Watchdog sparked a recent controversy on Aug. 6 by reporting Gov. Joe Manchin had been issued a subpoena as part of a federal grand jury investigation into bidding on state contracts, citing an anonymous source.

“The target may be Manchin himself, according to a source who asked to remain anonymous,” the story stated. Manchin immediately said neither he, nor anyone in the governor’s office, has been served with subpoenas. The following day, West Virginia Watchdog reported its “source was ultimately wrong about the purpose of the subpoenas.”

But on Aug. 9, Adams wrote his reporting “allowed West Virginia Watchdog to be a resource for other media outlets. We loosened the lid on the jar.” Recent news reports indicate the subpoenas might be related to the construction of a new exit off Interstate 79 into downtown Fairmont.

Some media industry followers express concerns about hidden agendas and political biases in these new organizations often funded by anonymous donors. A recent “Media Matters for America” column stated: “Cutbacks in staffing for newsrooms, mostly at the state capital level, have sparked a new wave of news outlets, many funded by conservative and ‘free market’ organizations. These non-profit groups — political/news hybrids — many of which decline to reveal their funding sources, represent a new level of news coverage.”

West Virginia Watchdog describes itself as “a nonpartisan organization that does not promote a political party or agenda.” Adams refuses to identify donors who contribute to West Virginia Watchdog. “As is the case with most non-profits inside and outside of the news media, West Virginia Watchdog allows donations to be given anonymously. Some of our donors choose to be identified, others do not,” Adams wrote on his website (http://westvirginia.watchdog.org).

On Friday, Adams told the Gazette-Mail that the Public Policy Foundation provides all the funds West Virginia Watchdog needs to operate.

Asked who donates to the Foundation, Adams said, “I have no idea who does that. All of our funding is handled through the Public Policy Foundation of West Virginia. All of our funds come from them. None of that goes through me.”

“Our political agenda is twofold: to promote government transparency and accountability. Beyond that, West Virginia Watchdog is a nonpartisan organization that does not promote a political party or agenda.”

Larry Matheney, secretary-treasurer of the West Virginia AFL-CIO, said, “Today, many groups on the political right operate under a cloak of darkness. They do not identify their contributors, so we never know whose message we are hearing.”

West Virginia Watchdog describes itself as “a project of the Public Policy Foundation of West Virginia and the Franklin Center for Government and Public Integrity.” Jason Stverak, president of the Franklin Center, which was founded in January 2009, was a former director of the North Dakota Republican Party. The center has offices in Bismarck, N.D., and Alexandria, Va.

The Public Policy Foundation states its mission “is to advance sound policies based on the principles of free enterprise, individual liberty and limited government.”

Michael B. Stuart, a Steptoe & Johnson lawyer in Charleston and chairman of the West Virginia Republican Party, incorporated the Public Policy Foundation on Dec. 6, 2006. On Friday, Stuart said, “I don’t do anything with that group. I have done hundreds of filings with the Secretary of State’s office. But if they are not regular clients, I don’t keep track of them.”

The foundation’s offices are in “Augusta On The Square” in downtown Morgantown, owned by the Warner brothers, including Mac and Kris, a former chairman of the state Republican Party.

It is impossible to determine exactly how much the Kochs have contributed to specific political leaders and organizations, Mayer wrote in the New Yorker.

Earlier this year, David Koch was the biggest individual contributor to the Republican Governors Association, giving them $1 million.

“Only the Kochs know precisely how much they have spent on politics,” Mayer wrote. Between 1998 and 2008, three Koch family charitable foundations donated more than $206 million to various groups and organizations, Mayer wrote.

The Kochs helped create two conservative research institutes. Beginning the in the mid-1980s, they gave $11 million to the Cato Institute, a Libertarian think tank, and more than $30 million to George Mason University’s Mercatus Center.

The Koch family spent millions more creating other groups to advocate conservative political positions, including: Citizens for a Sound Economy, Citizens for the Environment, the Economic Education Trust and Americans For Prosperity.

“Americans for Prosperity, in concert with the family’s other organizations has been instrumental in disrupting the Obama presidency,” Mayer wrote.

The Kochs, who made much of their money operating oil refineries, also own a variety of companies including: Brawny paper towels, Dixie cups, Georgia-Pacific Lumber, Stainmaster Carpet and Lycra.

Previous Article
Columbia Journalism Review: George Soros WASN’T a Nazi Collaborator
Next Article
The Press is Still Silent on the Overt Racism of Martin Peretz