Not being much of a conspiracy theorist, last week’s hearing by the CFTC (Commodities Futures Trading Commission) on futures market trading for metals was a subject of some interest to me, but the news flow since that time has been rather remarkable – if for no other reason that none of the news seems to be flowing in the mainstream media.

In fact, a search at the Wall Street Journal on “Gensler” (CFTC Chairman Gary Gensler would surely be included in any report) produces only this one item from before the hearing. 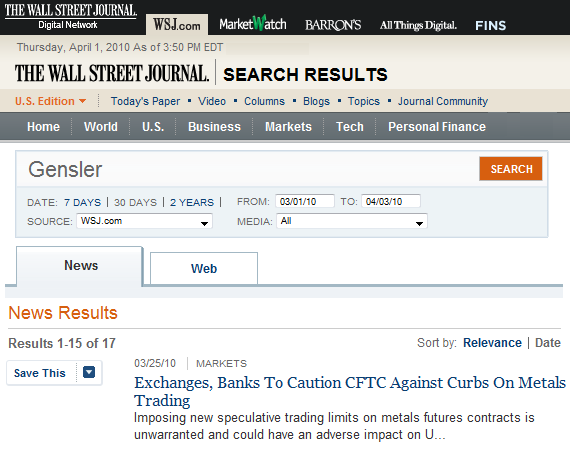 You’d think that, if a news organization that normally finds time to report on the most arcane of financial market goings-on saw fit to publish a story before the hearing was held, they’d also figure it was worthwhile to let their readers know what happened at the hearing.

The one story($) that the search did turn up quickly gets to the heart of the argument against imposing position size limits for metals markets – the real question that the hearing was attempting to answer:

Imposing new speculative trading limits on metals futures contracts is unwarranted and could have an adverse impact on U.S. markets, some exchange and bank officials will tell the Commodity Futures Trading Commission Thursday.

Later in the story they mention that GATA (Gold Anti-Trust Action Committee) chairman Bill Murphy was planning to speak though, curiously, they failed to mention him by name and then, even more curiously, they followed this mention up with almost three times as many words bashing those, like Murphy, who allege manipulation in these markets.

One of the staunchest believers in the allegations of gold manipulation—the chairman of the Gold Anti-Trust Action Committee—will testify as well.

But others, including the CME’s Mr. LaSala and John J. Lothian, a commodity trading advisor, futures broker and the head of a well-known markets newsletter, will urge the CFTC not to pay attention to arguments that there has been manipulation.

“Those who believe gold and silver markets are manipulated to keep prices low are nothing more than politically opportunistic rent seekers in my book,” Mr. Lothian planned to say. “They are parasites on the body public profiting from selling fear and seeking political change that will benefit their world view and related market position.”

Now, that’s some stunningly unbalanced reporting on a subject that, admittedly, anybody anywhere near Wall Street  probably doesn’t want to contemplate – that markets are rigged. But, in the broader scheme of things, wouldn’t it be better to just let “those crazy gold bugs” have their day and be discredited once and for all if they really are as nutty as the WSJ would have us believe?

Well, if you read the Wall Street Journal, you’ll never know what happened at the hearing and whether the CFTC paid any attention to them, but, if you look elsewhere, you’ll read about all kinds of interesting developments during and after the meeting.

Now, of all the sources above, the Mineweb story is probably the most mainstream and they had a few interesting observations and conclusions:

Some observers feel that the Gold Anti Trust Association (GATA’s) long held views on a conspiracy by some major banks and government entities to manipulate precious metals prices are off-target, but the latest evidence produced by GATA chairman Bill Murphy in open testimony at the CFTC hearing is compelling assuming the source material is accurate.

The evidence came in the form of a series of emails, and accompanying commentary, from a London metals trader, Andrew Maguire, who contacted GATA on March 23rd regarding alleged rigging of the precious metals markets by JP Morgan among others, through shorting the markets around key economic data releases, describing in detail how this is achieved. Maguire, Murphy contends, informed the CFTC enforcement division of this market manipulation ahead of the release of farm payroll data in February this year and set out not only how the manipulation would be achieved two days in advance, but also sent real time emails to the CFTC investigators as the alleged manipulation was taking place. According to Murphy the metals prices followed the scenario precisely – something which he felt could not be predicted without prior knowledge of the manipulation of the markets by major players with huge financial clout.

Now, why couldn’t the Wall Street Journal report something like that?

It seems to be a rather important development and one that anyone even remotely related to the gold and silver market would surely be interested in.

For the first time ever, a whistleblower has stepped forward citing specifics of a market rigging as it was occurring in real time.

Now, there were more than a few strange goings on at the hearing, one of which was that the video feed went dead just as Bill Murphy was about to detail the Maguire story for the CFTC. Here’s the video (that no one was able to see at the time) in which Murphy details Maguire’s charges that massive short positions by HSBC and JP Morgan aimed out flushing out longs occur regularly and predictably, in a coordinated fashion.

The fact that whistleblower Maguire was struck by a hit and run driver in London the next day adds to the intrigue. He was apparently not injured badly as he was able to do an interview with Eric King a couple days later in which he sounds completely sane (see link from above).

Of course, the case that the “gold bugs” should be ignored wasn’t helped by Jeff Christian of the CPM Group clumsily defending the current system and, in the process, essentially, admitting that there is little or no actual precious metal backing the trading in London – that it’s strictly a “paper market”, which, to most people makes no sense.

How can you have “price discovery” on a futures market when few of the sellers have anything to sell?

Patrick Heller at Numismaster (see link from above) put it this way:

In effect, the commissioners were told that almost all of the trading activities on the London exchange were merely settled by paper for paper, not for physical metals as the exchange supposedly requires. Further, the commissioners were told that it was impossible for the London exchange to ever deliver all the gold and silver owed to the owners of contracts.

After the hearing, GATA publicly released copies of Maguire’s e-mails with the CFTC. Murphy also revealed that Maguire had recorded all of his telephone conversations with the CFTC without asking for their permission to do so. This is legal to do in Britain, but such recordings cannot legally be provided to other parties. GATA is currently working to ensure that these recorded conversations can be legally released to the public.

You’d think there’s something in here that the Wall Street Journal would have found newsworthy.

Reuters filed this report after the conclusion of the hearing and they too failed to mention anything other than opposition to any idea of position limits in metal markets. A Google News search on “Gensler” confirms the virtual blackout by the mainstream news media, the only source of information coming from, well, blogs just like mine.

You’d think the mainstream media would at least acknowledge that something happened.

The real problem here is that the CFTC is being put in a tough position.

There is widespread agreement that something needs to be done to limit trading position sizes in energy markets because, when Goldman Sachs or some hedge fund start driving the price of oil to $120 or $150 a barrel, then gasoline prices surge past $4 a gallon and, not only is this bad for the economy, but, people are understandably miffed and they start complaining to their Congressmen.

But, if, as Maguire charges, big banks like HSBC and JP Morgan use these same kinds of concentrated positions on the short side for gold and silver in an attempt to keep prices down amid growing troubles in a world full of paper money, it would seem inconsistent (as a minimum) to not take action here as well.

If what Maguire says is true, it’s really the same thing – one or two players who are so big and so powerful that they can move prices whenever and wherever they want to, profiting all along the way.

The Mess That Greenspan Made